Tesla has revealed an upgrade package for its all-electric Roadster which endows it with a potential 400-mile range.

The new '3.0 Package' for the Roadster, which is due to be offered to existing customers in spring 2015, features developments that are a product of the company's experience with its Model S saloon.

Key to the upgrade pack is the adoption of new battery cell technology that boosts the energy capacity of each by 31 per cent. This means the Roadster's battery pack now delivers approximately 70kWh, up from its previous 53kWh.

Revised aerodynamics deliver a 16 per cent reduction in drag coefficient, down from 0.36 to 0.31. This is achieved with a retrofitted aero kit, as opposed to major changes to the existing panelwork. Lower rolling resistance tyres, new bearings and tweaks to the brakes further serve to improve the Roadster's range.

The company estimates a 40 to 50 per cent improvement in range, compared to the original Roadster. In standard form it could cover 245 miles on a single charge; in 3.0 form expect it to cover around 370 miles.

It also stated in a release that: "There is a set of speeds and driving conditions where we can confidently drive the Roadster 3.0 over 400 miles."

A Roadster will be driven non-stop from San Francisco to Los Angeles in the early weeks of 2015, a journey of approximately 380 miles, to demonstrate this.

Customers will be able to book their Roadsters in for the upgrade in spring 2015, once the new battery pack has been fully safety tested and certified.

Telsa also suggested that further updates would be made available later. For the Model S, however, the company says there will be no battery or range-related upgrades in the near future.

The Tesla Roadster was originally launched in 2008 and production stopped in 2012. Used examples are available in the UK, however, for around £80k. 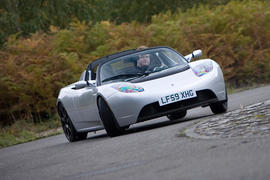 I wonder if they will let

Top Gear retest it to verify the new range.