BACK TO ALL NEWS
Currently reading: "Rule-breaking" McLaren GT to be revealed on 15 May
UP NEXT
Mini Recharged project to electrify brand's classic models

"Rule-breaking" McLaren GT to be revealed on 15 May

McLaren has announced its "rule-breaking" new GT will be revealed on 15 May and released two darkened shots of the car, following confirmation of the model at this year's Geneva motor show.

The images, lightened digitally by Autocar, largely reveal the GT's styling from both a side profile and the rear.

The Woking-based maker said the McLaren GT "is poised to redefine the rules of the Grand Tourer segment, introducing renowned McLaren engineering and dynamic attributes alongside high-quality materials and exceptional comfort". It added that the grand tourer will "share DNA" with the Speedtail Hyper-GT.

The upcoming model, which will sit alongside McLaren's Sports and Super Series, was recently spotted in new spyshots detailing a design the firm's boss claims is more bespoke than the 570GT. Unlike the 570GT, which shared a strong resemblance in profile to the 570S, the new car has a unique body design.

The model is expected to be powered by McLaren’s 3.8-litre twin-turbocharged V8 engine, with more power than the 562bhp 570GT. Speaking at Geneva show, McLaren CEO Mike Flewitt said the car will be “more differentiated” than the 570GT was, with a “more dedicated focus on the characteristics you want in a GT”.

The first customer cars will arrive this autumn with an expected price of around £145,000, after a the reveal next week. It’s the fourth car to reach production under the Woking brand’s Track25 business plan, out of a total of 18 new models due by 2025. 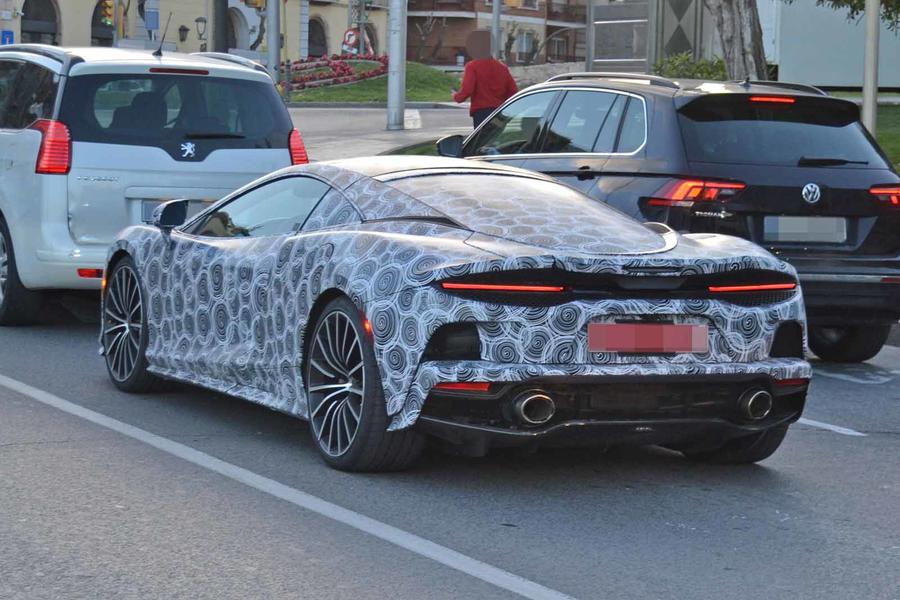 When the new model was announced at Geneva, Flewitt said that it could be the first of several more practical, but still performance-focused, cars produced by the firm.

Flewitt said: “It will be a car that combines competition levels of performance with continent-crossing capability, wrapped in a beautiful lightweight body. It’s a car that has been designed for distance and one that will also provide the comfort and space expected of a grand tourer.

“But it will also have a level of agility never experienced before in this segment. In addition, it will be the lightest of grand tourers and, by also having the best power-to-weight ratio, I promise it will be one of the quickest.”

Suggesting that the new grand tourer could be the first of several such models, Flewitt also confirmed that it would sit outside its established, three-tier line-up of Sports Series, Super Series and Ultimate Series families at the firm, instead saying that the car will be “a unique, tailored model”.

Although McLaren has trademarked the GTZ name recently, insiders have told Autocar this is to future-proof potential names of products, rather then being specific to either the GT or a potential collaboration with Zagato.

In a separate interview with Autocar, Flewitt claimed that the brand remains on course to have part-electrified models on sale before Aston Martin. “Aston are talking about competing with us, but there isn’t anything near the road yet,” Flewitt said. “We prefer to talk about it when we’ve done it.”

He confirmed that the first hybrid McLaren, the replacement for the Sports Series that is due next year, will send both petrol and electric power through the rear wheels only, while an all-wheel-drive hybrid system is being considered for higher-performance models.

McLaren is also believed to be switching to a weight-saving, smaller capacity V6 to combine with electric power. The forthcoming Sports Series replacement is also expected to come with a charging port. “Plug-ins have to be part of the equation,” Flewitt said.

“We’ve got to be honest: we’ve been driven to this by emissions regulations. I may be out of touch with what Fiestas can do these days, but when I look at [our] first car and its CO2 emissions, it looks like what I used to aspire for Fiestas to achieve in my Ford days – it's staggeringly good.”

While it won’t be possible to fully cancel out the weight penalty of a hybrid system, Flewitt hopes to minimise it. “I’ve always said my ambition was to launch the hybrid at the same weight as the outgoing car,” he said.

“We’re not going to hit that, but we’re going to be within 30-40kg. When you think the P1 hybrid system was 140kg, we've done a huge amount to manage the weight… I've driven a prototype of it and the car is very compelling. We wouldn't be launching it if it wasn't going to be.”

McLaren Senna vs Alpine A110: can less be more?​

Penshaw Car Centre sets the standard for Tyne and Wear for vehicle servicing, repair and now car and van hire across Durham, Sunderland and Washington. located within 300 metres of the washington Highway Penshaw Car centre provides convenient car and van hire at https://www.penshawcarcentre.co.uk/car-van-hire-sunderland/

I’m getting fed up of McLaren being feted (I think that’s the word) as being the best, this rule breaking, redefining new Car, has itonlty got three Wheels?!...no, it’s another rehash of previous models, which in turn will be bought by previous customers, no harm in that, successful British(?) doing rather well globally, about the only one mind, no, unless it flys like Lady Penelope’s RR , it’s just another generic Supercar churned by a computer geek...

That's not a word I can find in the OED lol

Fiat Itonity from 1978. Prone to rust so you don't see many of them around...

Side vent is like a smaller version of the Senna.