BACK TO ALL NEWS
Currently reading: Nissan to sell Mazda 5
UP NEXT
Bespoke ‘Silent Shadow’ to start EV era at Rolls-Royce

Nissan will launch its own version of the new Mazda 5 MPV in Japan, the two firms have revealed.

In a joint statement, the 5 (known as Mazda Premacy in Japan) will launch with Nissan badging in 2011. The statement said the addition of the 5 “will enrich Nissan’s minivan line-up” and "will also contribute to Nissan's global investment efficiency”.

Mazda said it will supply “clearly differentiated version of the Premacy to Nissan for sale in Japan”, which means it is likely to get a front and rear styling mirroring Nissan’s current design language.

“Mazda and its affiliates expect to enjoy increased profits resulting from the growth in production,” the statement added.

Mazda currently supplies the Bongo van to Nissan in Japan, while Nissan supplies Mazda with its AD/AD Expert. “The two companies will continue working with each other as major business partners maintaining their long-term relationship,” the statement continued.

There are no plans for the Nissan version of the Mazda 5 to be sold outside of Japan.

See all the latest Mazda reviews, news and video 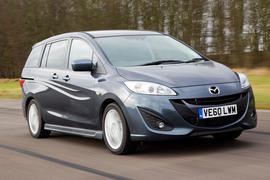 The second-generation Mazda 5 faces tougher than ever opposition, with established rivals like the Ford Grand C-Max controlling the MPV segment