BACK TO ALL NEWS
Currently reading: Next Suzuki Swift: new pics
UP NEXT
Key BMW and Mini models lose diesel engine options

Suzuki has released new pictures of its forthcoming Swift supermini, including the first shots of its interior.

While the exterior changes are minimal, the interior gets some styling cues from the larger Kizashi saloon, particularly in its centre console. There is also new LCD displays, new switchgear and metallic accents.

A Suzuki source has also confirmed to Autocar there will again be a Sport version of the Swift, and it’s likely to retain the current car’s 1.6-litre engine.

The Swift’s all-new platform increases the wheelbase by 50mm and the overall length by 90mm. The body is also lighter and stiffer, and the front and rear tracks are 10mm and 5mm wider respectively. Suzuki claims the Swift, its best-selling model, is much improved dynamically as a result.

The launch engine will be a new 1.2-litre petrol engine to replace the outgoing 1.3-litre unit. The Dual VVT unit produces 92bhp and 87lb ft, both figures slightly improved over the 1.3 unit. A manual gearbox will be standard and an automatic optional.

However, the real gains have been in improving fuel economy and cutting CO2 emissions. Economy is now 56.5mpg, 7.8mpg more than the 1.3, and emissions are 116g/km, 24g/km lower than the outgoing car.

Full UK pricing and specification will be announced later in the summer, but the Swift is likely to cost from around £11,000 when it reaches showrooms in the autumn. 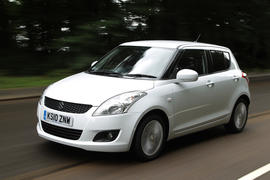 Suzuki had been the number one selling automobile for the last six consecutive years. And they doesn't stop there, you can also depend on every Suzuki vehicle sold in America. And several Suzuki vehicles followed such as XL-7, Grand Vitara, Verona, Aerio Sedan, Aerio SX, Forenza, Forenza Wagon, and Reno. All these come with astounding features you'll never find with other cars. Picking a Suzuki parts is not only a smart move but a great buy as well.

Autocar wrote:
Suzuki has released new pictures of its forthcoming Swift supermini, including the first shots of its interior.

I quite like the old Swift, I drove a 1.5GLX not long after it was introduced, but the emissions put me off, because I refuse to pay over the odds for my MVL. At the moment, I look for sub-120g/km cars only, and the fact that I have a Suzuki dealer only seven miles away is a tremendous incentive. When the 3 door model appears, I'll give it serious thought, because it seems to be quite good value and the dealer has a good reputation, which is an added bonus.
highland tourer 24 June 2010

beachland2 wrote:
i think the first to do it was the 97bhp toyota IQ.

Sorry, but I was referring to petrol superminis with low CO2 emissions. Whilst the smallest of cars (mainly city cars, such as Pandas, C1s, IQs, etc) over the last few years have been able to achieve sub 120g/km, superminis have mainly relied on small turbo-diesels to meet the sub 120g/km rating (as mentioned by theonlydt in his post), ableit with significantly higher purchase price.

The only supermini I can think of which currently achieves this with petrol power and over 90 bhp is the 1.33 Yaris, although I always think of this car as being between classes (a little too big for a city car, but at under 3800mm not nearly as long as, say, a default supermini, such as a Fiesta, etc, which is around 4000mm).

The Swift, with its cleaner and more powerful replacement petrol engine, appears to be a move in the right direction. With the recent focus by several manufacturers (Renault, Peugeot) to reduce weight in their newer models, and with eco-driving systems (such as the stop-start system on the 1.33 Yaris) becoming more frequently available as standard, rather than only only on expensive "eco" models (usually diesel), hopefully this will mean that cheaper entry-level petrols will become more of an option for economy-minded buyers seeking a supermini.