BACK TO ALL NEWS
Currently reading: New VW Sharan from £23k
UP NEXT
Nissan will build batteries in UK to sustain Sunderland plant

Volkswagen’s new Sharan will cost from £22,980, the company has confirmed.

Most engines will be badged Bluemotion and are fitted with stop-start and battery regeneration systems as standard.

A choice of four trim levels is available: S, SE, SEL and Executive. All feature seven seats as standard except for the Executive, which has six individual leather seats.

The new Sharan features its easy fold seating concept, which allows the seats of the second and third rows to be folded into the floor.

All models get ABS, ESP, curtain airbags, digital radio and iPod interface. VW’s second-generation park assist can also be specified, which steers itself into a space.

Read more about the new Sharan

See all the latest VW Sharan reviews, news and video 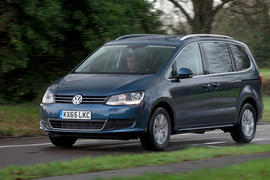 Alimited edition maybe,hope they call it the Osbourne! lol.