This is the revised Mercedes CL, which has been given a mid-life facelift three years after the car’s introduction.

More significant than the exterior changes, though, are modifications underneath the bodywork, including the arrival of a new twin-turbocharged 4.6-litre V8 direct-injection petrol engine.

In combination with a revised version of Mercedes-Benz's seven-speed automatic gearbox with an integrated stop-start system and brake energy recuperation, the new CL500's engine is also claimed to provide fuel economy savings of up to 6.8mpg and a 64g/km reduction in CO2 emissions, to averages of 29.7mpg and 224g/km.

Mercedes will sell a four-wheel-drive CL500 in selected markets, but as part of its policy not to engineer many of its four-wheel-drive models for right-hand drive, it will not make it to the UK.

However, the more powerful CL600 will be available to UK customers as a special order - and a follow-up to the CL63 AMG is planned, using a new twin-turbo V8 with 536bhp and 590lb ft (or 563bhp and 663lb ft when configured with an optional performance package).

The AMG will come with a seven-speed multi-clutch transmission. Continuing its flagship role within the new line-up will be the CL65. It retains the same twin-turbocharged 6.0-litre V12 engine as the existing model, with 603bhp and 737lb ft.

The options list includes Active Lane Keeping Assist, which monitors when the car has left the driver's chosen lane via a camera in the windscreen and can intervene by gently braking the wheels to pull it back on course. Mercedes had originally planned to called the facelifted CL the S-class Coupé, in keeping with the naming policy kicked off with the introduction of the E-class Coupé in 2009.

However, officials say the change in name will now not take place until an all-new model, known internally as C217, arrives in 2013.

See all the latest Mercedes CL reviews, news and video 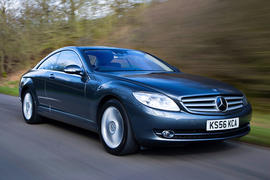 The Mercedes-Benz CL borrows much from the S-Class, so it's going to be good. But just how good?

In Germany the new S65 AMG has 630PS, which is more than what is quoted here (albeit in BHP, but wrong calculus anyway).

Yes, in RHD markets Mercedes-Benz (and BMW) are really falling behind. What's especially disappointing is that Mercedes didn't even engineer it's mid-size GLK for the RHD markets! That was such an oversight; they could have sold thousands by now.

As for the revamped CL... I preferred the way it looked before; it's lost a lot of elegance in the facelift. I'm sure it's a better car than before - the emissions are especially impressive - but I don't hanker after it.

A lot of this is very personal - one person likes something, the next hates it, that just life.... For me though the Audi's have much nicer interiors, and far supierior satnav. I also think they're more understated. Take the new E class - I actually liked the old one - but the new one looks like someone bought a Hyundia and then "did it up", badly. Take those daft LEDs strips on the front - they look like they are stuck on. Also the interior is pretty awful - all straight lines and tough plastics. Its a pity really as I had one of the previous E's and liked it a lot - thought it was very elegent outside and in. Mercedes almost seem to be trying too hard on the styling - like they found one of Bangle's old notebooks and copied it.... Having said all that, beauty is in the eye of the beholder, and the next guy might see things entirely differently!

On the 4wd point - that's imperically something Audi can do and Merc (in RHD) it seems cannot. The E I owned once half spun on a dual carrigeway on a cold but dry day, in heavyish traffic. Last winter my A8 was just awesome. No contest.