The hardcore new Competizione edition of the Ferrari 812 Superfast features the most powerful combustion engine of any road car from Maranello.

Detailed last month but revealed in full today, it is described as "the ultimate expression of Ferrari's concept of an extreme front-engined berlinetta. It brings a raft of visual, mechanical and dynamic upgrades over the standard car, itself beaten in terms of outright potency by only the LaFerrari and SF90 Stradale hybrid supercars.

Chief among the upgrades is a substantial power hike from the front-mounted V12, which has been boosted from 789bhp to 819bhp, slightly more than the figure produced by Lamborghini's new electrically assisted top-rung hypercar, the Sián FKP 37. 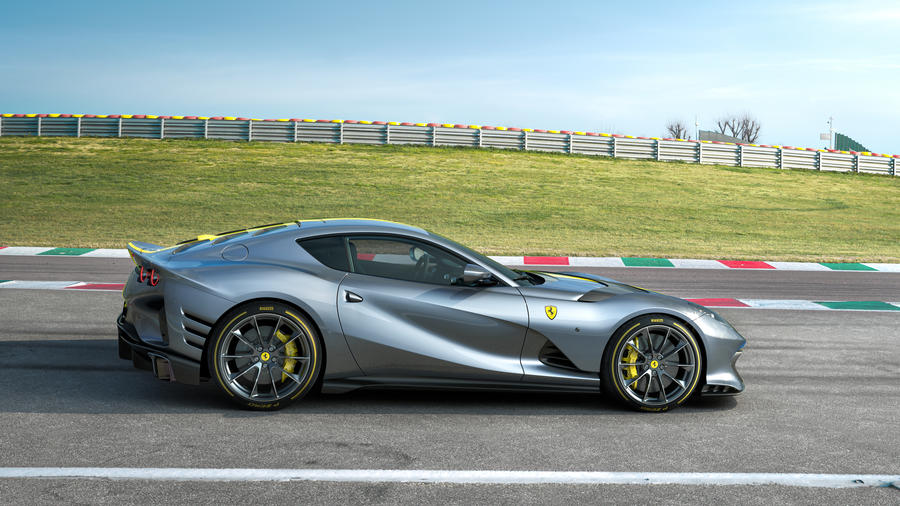 Most notably, the rev limit is up from 8900rpm to 9500rpm - making this Ferrari's highest-revving production engine to date and among the quickest-spinning road-going V12s ever made. This was achieved through a redesign of several key bottom-end elements.

The titanium con-rods, for example, are said to be 40% lighter than on the standard car, while the pins inside the pistons and the camshafts now wear a 'diamond-like carbon' coating for reduced friction and improved durability.

The crankshaft, too, has been rebalanced and weighs 3% less in the standard Superfast, and the intake system has been fitted with 'variable geometry inlet tracts' which essentially change the length of the intake constantly to maximise the strength of the explosion in the combustion chamber.

Meanwhile, Ferrari has enhanced what it calls its "traditional incredibly high standard of engine sound" with a specially tuned exhaust system, which introduces a petrol particulate filter while preserving the 812's trademark noise courtesy of a new tailpipe design.

The Superfast's seven-speed dual-clutch automatic gearbox features in the Competizione, but calibration work has cut shift times by a claimed 5%, while the lifted rev limiter ensures "even more sporty" gear changes.

Aside from improved straight-line pace, the special edition also adopts a series of revisions aimed at enhancing handling. Most notably, independent steering is now fitted to all four wheels, which Ferrari claims will extend "the feeling of agility and precision when cornering, as well as providing unparalleled responsiveness to steering inputs".

"Extensive" use of carbonfibre has reduced the 812's dry weight by 38kg to 1487kg. That's coupled with a revised aerodynamic package aimed at maximising downforce: the bumpers, splitters and diffusers are new and the rear screen - now an aluminium panel rather than conventional glass - has been fitted with prominent louvres, or "vortex generators". In addition, the rear spoiler has been raised and the distinctive bonnet strip is now made of carbonfibre.

Availability details have not been confirmed, but given that the special edition is pitched at "Ferrari's most passionate collectors and connoisseurs," we would anticipate a production run in the low double digits. It will also command a hefty premium over the standard 812 Superfast's list price of £260,000.

Prefer it with a Roof, drop top reminds me of the Corvette C6.

It will no doubt be a great car dynamically, but as the standard 812 it's just ugly, roll on the proper F12/812 replacement.

I am afraid we will have to disagree on that one, lol.

It is a fact that the superich queue up for every so called 'special edition' at almost any price the manufacturer cares to charge. This is rank madness and just encourages the greed factor at OEM level., and resentment from the poor making them a target.

You cannot predict fture values...true some have appreaciated, but more recently on many supercars that direction has been reversed, and who knows what will happen after 2030.

Driving in its purest form?..... I dont think so. Far too much electrical gizmo proliferation for that. I think you need to go back to the 60's for pure ICE enjoyment (or a car from the era - Caterham for example).

I dont have an issue over spending large sums of money on cars per se, In my case classic cars. But the endless stream of 'special editions' with extra carbon 'bits' and a few more horsepower on roads with primarily less than 80 mph speed limits globally are becoming more and more irrelevant, and more about a statement of wealth. The fact that most spend their life in storage is even more obtuse.

Still, it is your money, and IF you can afford it - knock yourself out. Its a free world, relatively.