BACK TO ALL NEWS
Currently reading: New Dacia Spring EV is "being evaluated" for UK sale
UP NEXT
Stellantis exec: range and charging biggest barriers to EV adoption

New Dacia Spring EV is "being evaluated" for UK sale

Car-share and delivery van options due for electric model, which is claimed to be Europe's most affordable electric car
Share
Open gallery
Close
Share story

Dacia has revealed the production version of its first electric vehicle, the Spring Electric, which will be offered in city car, car-sharing and delivery van forms when it goes on sale in early 2021.

The Chinese-made Spring will be offered across mainland Europe initially, with car-sharing company Zity a primary customer. It is not confirmed for sale in the UK as yet, however Dacia now claims the car is "being evaluated" for the possibility of a right-hand drive version for UK markets.

Previewed by a concept last year and based on parent company Renault’s Chinese-market City K-ZE, the Spring has been designed for use in urban areas in both passenger and, later in 2021, cargo forms - the latter designed for last-mile city deliveries. It uses an electric motor that makes 44bhp and 92lb ft, fed by a 26.8kWh battery.

The interior features a 3.5in digital display between the analogue instrument dials, while an 7.0in touchscreen infotainment system is an option. This includes voice control and Apple CarPlay and Android Auto functionality.

Dacia says the Spring will offer the lowest total cost of ownership (combining purchase and running costs) of any new vehicle on the market, although it has yet to publish any pricing details. It's expected to under

The car-sharing version of the Spring will be offered in select European countries and will come with durable artificial leather seats and 14in wheels. Meanwhile, the cargo van will forgo rear seats to offer 800 litres of luggage capacity and a 1033mm load length.

Renault opens up CO2 emissions pool to other manufacturers 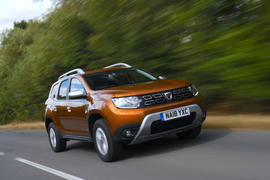 This looks like the compact SUV EV that I've been waiting for!

As it is based on the Renault Kwid, it's already available in right-hand drive form for India, so I can't see why it couldn't made be available in the UK.

I thought the Dacia Spring was based off Renault's KWID, designed for the Indian market and locally built there, as well as Brasil, so why the need for additional production in China ?

Built to a price

Since this is built to a price and adding the option to move the steering wheel on the wrong side is costly, it's a tough call.
Maybe if their market analysts can show enough brits will be willing be shamed for not buying a "premium" badge...
streaky 17 October 2020

Since this is built to a price and adding the option to move the steering wheel on the wrong side is costly, it's a tough call.

Considering this is built in China, close to India and and with many other RHD markets in the world, it surprises me that any car designed today is not from the outset engineered for the steering wheel to be on either side.