BACK TO ALL NEWS
Currently reading: New Citroen e-Berlingo: prices and specifications revealed
UP NEXT
Lotus Emira vs Porsche 718 Cayman

Citroën has revealed pricing and specification details for its all-electric Citroen Berlingo MPV, which features a 136bhp motor and a claimed 174-mile range.

Prices for the Feel start at £29,575 after the government’s £2500 plug-in car grant has been applied. All models feature a 50kWh battery paired with a 136bhp electric motor for a range of 174 miles. It can accept up to 100kW AC charging, meaning it can be recharged from empty to 80% capacity in 30 minutes.

The Flair XTR starts from £32,280 and gains a 10in digital drivers display, a head-up display, sat-nav, a 180deg reversing camera, 17in wheels, black roof bars and door mirrors and orange bodywork features.

The ë-Berlingo is one of three electric van-based people carriers that Stellantis will launch this year - in line with its aim of completely electrifying its line-up by 2025 - arriving ahead alongside mechanically identical Peugeot e-Partner and Vauxhall Combo-e Life siblings.

The ë-Berlingo, along with its Vauxhall and Peugeot siblings, sits atop the EV-compatible e-CMP platform which also underpins the Vauxhall Corsa-e, Peugeot e-208 and Citroën ë-C4. 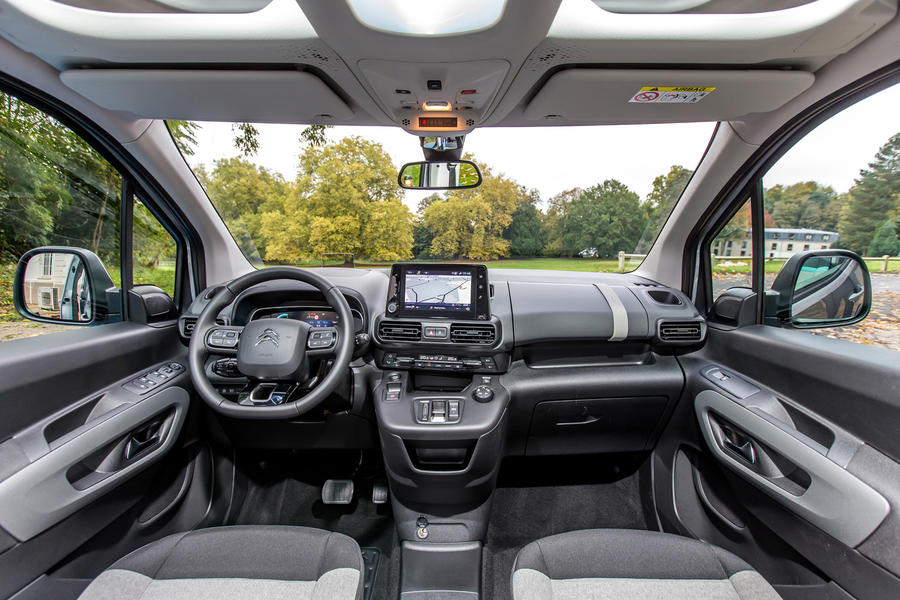 Citroen's boxy, slightly quirky van-based car returns to top form in only its third iteration in more than two decades

Otherwise, the design and interior are largely carried over from the combustion-engined car, save for the addition of blue badging and trim accents. The 8.0in central display offers EV-specific display modes, and there is an EV drive mode toggle switch in place of the gear selector. Five seats are fitted as standard, while the long-wheelbase version gains a third row, each accessible via a pair of large sliding doors at each side.

The innovative 'Modutop' roof lining is one of 26 individual storage cubbies throughout the cabin, and offers 92 litres of storage within a translucent casing, accessible from the rear seats or boot.

As with its siblings, the e-Berlingo is also available in panel-sided commercial form.

To this end, load-carrying capacity is unchanged from the combustion-engined models, with a maximum capacity of 4400 litres and an 800kg payload.

The new ë-Berlingo is now available to order in the UK.

Always liked the Berlingo. Even though I don't need it.

Totally missed opportunity with a pitiful range for a vehicle capable of carrying seven people and their luggage, let alone when the conditions sap the power even more like driving along a motorway in winter.

Despite this, the price will be ridiculously high too.

bodgerx 25 February 2021
It has the same battery and drive train as the eC4 with much worse aero so it wasn't ever going to be above 200 miles range.

170 miles is acceptable. There's plenty of EVs out there with less than that at the moment. Most journeys in the UK are less than 150 miles anyways, so for most people it would work.

I think that an electric Berlingo makes an awful lot of sense if you're a van owner operating in an urban area the claimed range and recharging times would enable to get most of a full day's use of the vehicle with the minimum down time. Will the electric MPV versions of these vans be available here in the UK as well?