BACK TO ALL NEWS
Currently reading: Mulliner reveals one-off space-themed Bentley Bentayga
UP NEXT
Exclusive: Aston Martin seeks funds to safeguard its future

The one-off Bentayga, named the Space Edition, was commissioned by a customer of Bentley’s Orlando dealership. The model features an exterior paint shade called Cypress, a metallic grey with green undertones that harks back to the launch of the first-generation Bentley Continental GT in 2003.

Bentley’s Blackline Specification option, which adds gloss black exterior trim, has also been selected for the car. The model’s carbonfibre has been highlighted with an Orange Flame colour that, Bentley says, “takes inspiration from comet dust trails racing across the night sky”.

The cabin, meanwhile, features a Beluga and Porpoise styling option, bespoke tread plates depicting the planets of the solar system, and the use of orange for the stitching, bezels and upholstery. The gear selector and steering wheel are also trimmed in bright orange.

The car is said to have been inspired by the Space Coast in Florida, which houses the Kennedy Space Centre and Cape Canaveral Space Force Station. 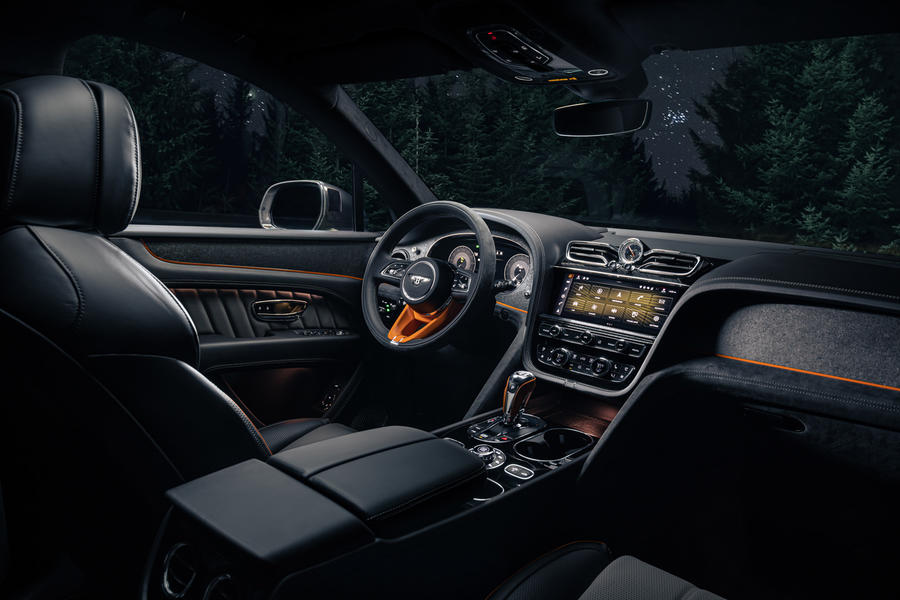 “The Space Coast in central Florida has long been established as the world’s gateway to explore the universe above, so space travel and exploration were the perfect themes to inspire this unique car,” said Joseph Wierda, general manager at Bentley Orlando.

“The rise in popularity of our bespoke commissioning service is testament to the skills of both our Mulliner design team and the craftspeople working tirelessly to deliver any request,” said Paul Dickinson, head of Mulliner commercial.

“Our personal commissioning guide is the launch pad for so many customer journeys, and this space-themed Bentayga Speed is a stunning example of what’s possible.”

The Bentayga is currently Bentley’s best-selling model. The firm has sold more than 28,500 examples of the SUV, which has contributed significantly to the firm achieving another record in 2021.

The Bentayga, which is now offered as a hybrid, made up 40% of the luxury brand’s total sales last year.

Like most of these cars we can't afford, don't think there worth the money etc etc, there either of a limited run or like this a one off, where's the harm?....

The only aspect of this car that seems in any way space themed, seems to be the kick-plates...

Rather like those American films 'inspired by real events", that bear no resemblence to those events, save a few character names.

I look forward to seeing this on the next series of Pimp My Ride,if I were Bentley I'd keep quiet about this hopefully unique creation, rather a pity that it didn't go down with that load of expensive VW products a few weeks ago