BACK TO ALL NEWS
Currently reading: Meriva vs Scenic vs C3 Picasso
UP NEXT
Mazda to launch own version of new Toyota Yaris by 2023

Meriva vs Scenic vs C3 Picasso

The new Vauxhall Meriva has moved upmarket and added rear-hinged FlexDoors to its armoury - but does this mean it's better than urban mini-MPV rivals the Renault Scenic and Citroen C3 Picasso?

We're testing a 118bhp 1.4-litre turbocharged petrol engine in the Meriva, which will propel it from 0-62mph in 11.5sec. It is in Exclusiv trim.

See the Vauxhall Meriva versus its rivals pics

For comparison we have a 118bhp 1.6-litre Citroen C3 Picasso and a 128bhp turbocharged 1.4-litre Renault Scenic. The C3 Picasso is smaller and cheaper than the Scenic and Meriva, but it's still a five-seat family car, so it's here to see if the others justify the extra money.

Neither the Citroen nor the Renault is unpleasant to drive, but it's clear that interior space, flexibility and comfort were the development priorities, and that dynamically the main aim was to make the car safe, stable and easy to drive.

The Renault is the most detached of the three to drive. The steering is light to the point that, in low speed manoeuvres, it can feel like the steering wheel is no longer attached to the column. The gearbox is equally vague.

Soft damping also results in a lot of body roll, but it's progressive and the car stable when it's settled into a corner. The soft damping allows the Scenic to absorb the road surface with particular efficiency at urban speeds around town.

The Vauxhall is the slowest of the three - 0-62mph takes 10.9sec in the Citroen and 10.5sec in the Renault - but it is easily the most rewarding of the three to drive. All its controls are heavier, more accurate and more precise than those of its rivals.

Around town it's a shame the Meriva couldn't be configured to provide a more supple ride to go with taut body control. The high-speed ride is better, but is still unsettled over continuously rutted roads.

Refinement in the Vauxhall also fails to match the standards set by the Renault and Citroen. Engine noise can become intrusive and tyre noise can boom on less forgiving surfaces.

The C3 Picasso betters the Meriva for refinement and ride, and offers marginally more driver reward than the Scenic. However, the gearshift, though more defined that the Scenic's, is still long in the throw and notchy, and its naturally aspirated 1.6-litre engine lacks the punch of the other two cars.

Living with the cars

But it does have the least comfortable seats - front and back - and lack the flexibility of the others, having a 60:40 split rather than individual seats. 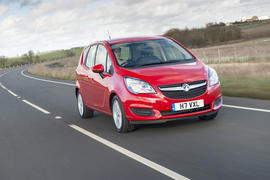 The Vauxhall Meriva, with its rear-hinged back doors, is a more mature car than before, but little more innovative

The Meriva is a particular triumph in terms of adult compatibility and child-friendliness. It's comfortable for the driver, and the FlexDoors add useful versatility. However, it really only offers two permanent back seats, whereas the Scenic has three, although they are narrower.

Despite the criticisms and obviously lower-class interior, the C3 Picasso wins, given the available space for the money - and its qualities will appeal even more if the car is only to be used for short journeys, as many are.

The Meriva comes second, striking a very good balance between being enjoyable, practical and flexible.

The Renault has many talents, but it loses out here due to the desensitised drive and high price.

The full test story is available in Autocar magazine, on sale now.

Not the same categorie...

More than £17K for a mid-spec Meriva? Car prices have gone mad!

They have and why this is a fair comparison. The Meriva may be only slightly bigger than the C3 Picasso but they're charging near Scenic money for it.