A Lexus hybrid crossover is on the cards

With sales of around 10,000 per year, the CT200h has not broken into the booming compact premium market in the way that Lexus had hoped, Uyttenhoven has admitted. That market segment is worth around 750,000 cars per year in Europe.

No further hints about the replacement for the CT200h were forthcoming, but the LF-SA concept shown at last year’s Geneva motor show was a hint at what the CT200h's replacement may look like when the current car reaches the end of its life within the next 24 months.

Despite achieving global sales of 652,000 units last year, Lexus has struggled to gain traction in the overall European premium market. Across 'wider Europe', the brand sold around 64,000 units last year. Uyttenhoven says Lexus hopes for more than 70,000 sales this year.

In the future, Lexus is hoping to capitalise on the move against diesel engines in city centres, with Uyttenhoven claiming that “300 European cities now have some law concerning access”. He also noted that petrol hybrid engines are especially low in NOx emissions.

Although it is associated with big saloon cars, Lexus is making progress in the global crossover market. It sold 150,000 units of the outgoing RX model last year and expects to hit 200,000 with the new RX this year. Additionally, 150,000 of the smaller NX model were sold during 2015, a figure that Uyttenhoven expects to rise to 160,000-170,000 units this year.

The upshot is that crossovers could account for half of Lexus’s global sales this year. “In Europe, we need to get annual Lexus sales above the 100,000 mark - something that would finally give us visibility in the market,” said Uyttenhoven. “You need to command 5% of the segment to become a real player.” 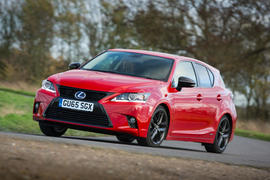 24 May 2016
The CT200h doesn't sell because it looks like a fridge. Horribly awkward styling doesn't cut it against the likes of the 1 series and the classic A3. Maybe if Lexus think more NX and less Toyota Corolla, things will pick up.

24 May 2016
Agree with conors93 (apart from the 'classic' A3 comment, classic my 4rse). The current car is a basket-case in design terms. Why would you hinder a car with such awkward styling details and ungainly proportions if it's to go to work in a highly competitive sector? They certainly do need a CT Mk2 if visibility is important to them and they need to make it look good next time. An SUV version certainly wouldn't be a bad idea as well, but they need to get the styling of both sorted or it wont matter what they do. Lexus styling in general terms is a worry. I like the NX and the new RX personally but they are definitely 'over-worked'. The IS too. The GS and LS are weirdly invisible in styling terms, so much so that the quality and talents of the cars are missed by the vast majority of potential buyers. I guess the styling works in the context of California but if they want to crack Europe/UK they've got some work to do.

1. Roadtest inverse reality - read any road test of any Lexus and it is rated lower than its equivalent German competitors. Yet many Lexus owners find their car better than their previous German cars in many aspects ans stick with the brand.

2. GB is one of if not the most image concious car market in the world. A Lexus on the drive doesnt in the public conciousness shout loudly enough to the world about how well your doing.

In terms of sales numbers, Lexus dont sell to fleets or hire car companies like the Germans do.

25 May 2016
Really hard to get a discount on a Lexus. When I was looking for a car last year I tried the CARWOW website. There were no discounts on the NX - the best offered was a tank of petrol. Discounts were available on that site for most premium motors - huge ones on Volvo and the Merc E Class.