With the imminent arrival of an all-new Focus ST, we hitch a ride to see if it can bottle the brilliance of its little brother
Open gallery
Close

"The spirit of everything we learned from the Fiesta ST is definitely in there," says Leo Roeks, peering up at the differential housing of the latest, third-generation Focus ST.

He is not, I might add, talking about that specific piece of hardware, not least because this is the first time Ford has put an electronically controlled limited-slip differential in anything exclusively front-driven. The boss of Ford Performance Europe is instead referring to the entire car – the new Focus ST, yours later this summer for £29,495 – and how his engineers have captured the bubbly, chuckable persona of the smash-hit Fiesta ST in a larger, more refined package. It’s something worth getting excited about, certainly, and Roeks makes the point again: "The DNA is very important to us."

We’re stood in a service building at Ford’s Lommel proving ground in Belgium, where a car like the Focus ST goes to be tortured when it finally moves off the computer screens, off the production line and into the light of day. By now the front-engined layout is well known to us, and underpinned by Ford’s lighter, more rigid new C2 platform, which needs no strengthening.

Where the Fiesta ST uses a downsized three-cylinder engine, its bigger brother has gone the other way, reprising the turbocharged, all-aluminium 2.3-litre four-cylinder EcoBoost engine previously found in the Mk3 Focus RS, only this time with less pulverising but far from meagre totals of 276bhp and 310lb ft. That’s more torque than any direct rival, in fact, and enough to see the ST out-perform the hulking old RS through the mid-range, says Roeks. How about that for progress? 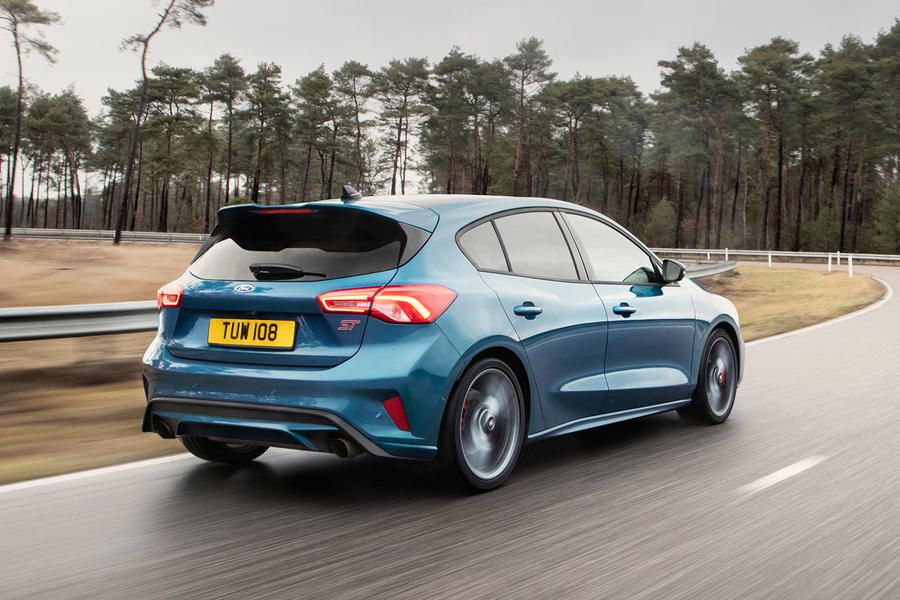 Off the line, the official 0-62mph time is 5.7sec – some 0.8sec quicker than the last generation of Focus ST and about as quick as it’s possible to go without rear driveshafts. As for getting power to the front axle, it’ll be possible to option a seven-speed automatic gearbox (though not in the 187bhp diesel estate ST) but the six-speed manual is what most owners will want. As such, Ford has put its back into developing this aspect of the car, not only reducing the throw but introducing rev-matching and a flat-shifting function. Basically, if you’re close enough to the 6500rpm red line, you needn’t lift off the throttle.

But how, then, do you distil the essence of the Fiesta ST in a car considerably larger, considerably heavier and in possession of an extra pair of doors? The inherent, genetic similarities must come from the platform – a good thing, as we know the C2 is pleasingly agile – and Roeks also alludes to the "very, very detailed" tuning of the unique suspension knuckle geometry and Michelin Pilot Sport 4S tyres for crisp turn-in response.

More broadly, the anti-roll bars have been fattened up, and the ride height is 10mm lower with damping stiffness up 20% for the front struts and 13% at the rear, where you’ll find Ford’s SLA independent suspension. Every ST will also come with adjustable dampers, but only with the Performance Pack is the driver able to switch between the closely related settings for Normal and Sport, and then a much firmer setting for Track. Elsewhere, the steering ratio has been quickened by 15% – at two turns lock to lock it’s now rabidly quick, more so than even the old Focus RS. No wonder Roeks doesn’t see the need for rear-wheel steering, à la Renaultsport, though he adds that such systems can also behave unpredictably.

Indeed, what Ford has tried to achieve in terms of the car’s intrinsic feel is almost impossible to quantify, but it concerns linearity, and taking a fine-tooth comb to the car’s mechanical and electronic controls – the actuators, gearsets, algorithms – in order to elicit the most intuitive action possible. In practice, it means the braking, throttle response and steering must feel second nature in operation, and it seems any occasion whereby the driver might need to ‘overcorrect’ would strike Roeks and the team as a personal failure.

"The bad thing about non-linear steering and brakes is that you get tired quickly," he says. "You can see this if you drive at high speed on German autobahns, where your brain is correcting all the time … We want it as linear as we can get; the lowest friction levels we can get in all the systems." Listening to this, you might think the aim has been to chase weight out of the driving controls, but it isn’t – only irregularity. 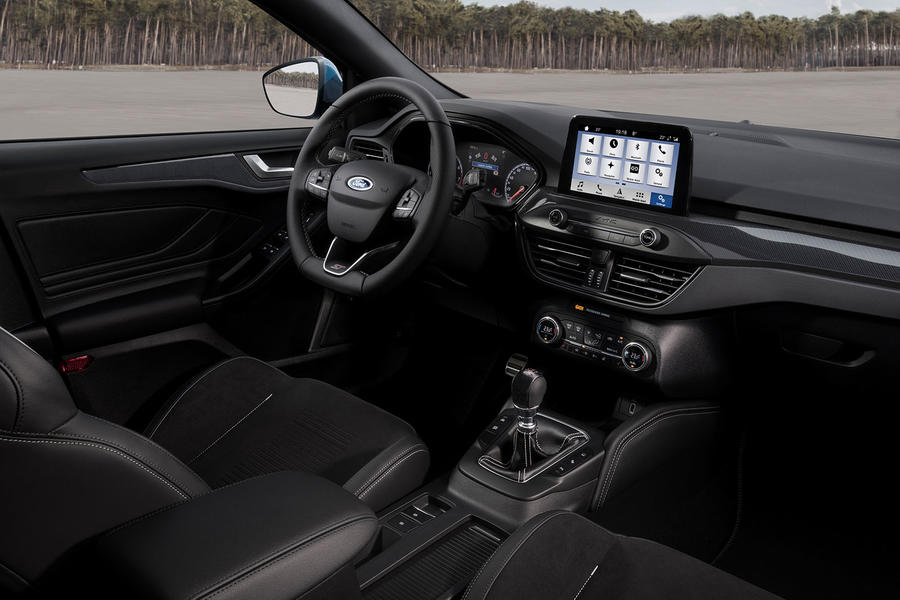 Time for talking over, it’s into the car. For now, we’re able only to ride along shotgun with some of Ford’s engineers. It’s not an ideal scenario, particularly for a product intended to brim with feel from behind the wheel, but if you were to choose an environment in which to conduct such a detached appraisal, Track 7 at Lommel would be second to none. There are second-gear hairpins, tightening parabolas taken in third, off-camber kinks, unsighted crests and even one or two off-camber kinks draped over an unsighted crest, with a dash of trail-braking thrown in for good measure. It’s hell for tyres, but must be damned good fun for the engineers, and gives a spectator plenty to work with.

Two things quickly stand out from the passenger seat, which, incidentally, has a design evolved from those in the Fiesta ST, with even deeper bolsters and nice bucket-like feel. Straightaway you can’t help but admire the suppleness of this chassis or its playfulness. Like the Fiesta, the new Focus ST seems to naturally pivot into bends, the suspension allowing more pronounced body movements to develop than you’ll get in either a Civic Type R or an RS Mégane but retaining good control.

Through Track 7’s longer sweepers it’s also not hard to sense the same balance that makes even a basic 1.0-litre Focus unusually satisfying to drive, and through tighter sections that e-diff does genuinely seem to pin the car’s nose to the inside white line, though lateral grip isn’t as endless as the official literature would have you believe. It all seems quite predictable, doesn’t it? But if there’s a prevailing theme, it’s that the car feels in harmony with itself, retaining its composure and fluidity, and that should never be taken for granted.

And on that note, our time with the Focus ST is over. Take it as read that this car will be right up among the quickest front-driven hot-hatches – truly, it feels ferociously fast through the mid-range, and improved aerodynamics have supposedly helped prototypes nudge 170mph on the autobahn. Know also that it possesses one of the more characterful, eventful four-cylinder engines around, and I suspect the Focus ST will prove more pliant on British roads than many of its classmates, too. 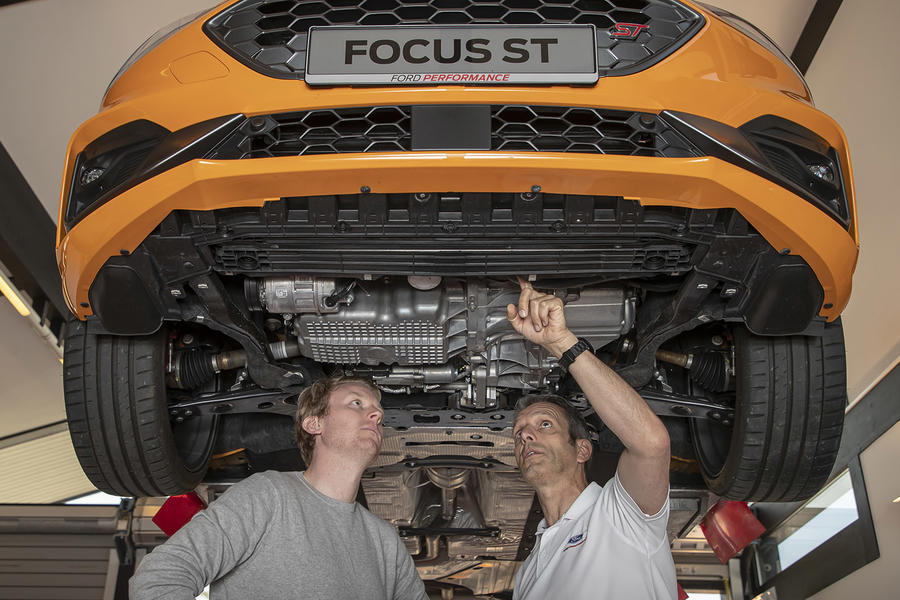 But what of the toughest competition of all? Not the Golf GTI, though as the best-selling hot-hatch, that car remains the ultimate benchmark for a rounded product. For drivers, however, there is another.

"The Civic Type R wants you to go fast, and if you do that, then it’s a pretty good car," Roeks concedes, but his team also reckon their car has the better of the Honda in terms of agility, and certainly for ride comfort. A win on both those fronts would shake up the segment comprehensively. I’m not so sure this Ford has the body control to match the Honda, but it does seem an eminently more adjustable, humorous machine at sensible speeds, and in the real world that can make the difference for owners. Either way, not long now until we get to find out.

This is the first Focus ST to get driving modes, which shift the parameters for the ESC, engine and steering maps, adaptive dampers and differential. Push ‘S’ on the steering wheel to slot straight into Sport.

New Focus ST gets a longer rear spoiler and swaps its central exhaust outlet for a pair modelled on the old RS. It still cuts a relatively restrained figure in the metal, mind.

The Focus ST story so far…

Mk1 ST170: The love-child of Ford’s Special Vehicle Engineering and Special Vehicle Team departments looked sharp and touted a Cosworth-tuned 2.0-litre engine under the bonnet, to go with a six-speed manual ’box. At 1314kg it was heavier than the wide-arched RS that followed, but was arguably the sweeter steer, and to this day remains highly regarded by road-testers.

Mk2 ST 2.5: Ford’s decision to squeeze the five-cylinder turbo engine from a Volvo S40 T5 into the second-generation Focus proved popular, despite the fact this wasn’t exactly the deftest-handling hot-hatch of the era. No, the Mk2 ST was more of a big-hearted cruiser, with the kerbside presence to match its mammoth torque output.

Mk3 ST: Much more of a global car than its predecessors, the third Focus ST was even available with an estate body, and turbodiesel power. Ultimately it wasn’t as sharp as efforts from Rénaultsport, but crucially it gave its driver more to think about than rival-in-chief, the Golf GTI, and was mercifully cheaper to run than the Mk2.

This 2.3 4pot, I know the focus rs and mustang have variations on it but does it have anything to do with the old 2.3 cosworth developed engine from the old scorpio? I know that was a while ago but modern engines can be based on older iterations.

As for the car, I like it, when I first saw a new focus I wasn't sure, I thought it a little bland and generic, but now having seen a few it has grown on me and I like the looks both inside and out. And going by previous st versions, I'm sure this will be an excellent steer.

2.3 a number to remember

Glad they kept it below £30k there was an Autocar story saying it'll be £33k.

Looks 8/10, performace 9/10, value 9/10. I can even over look the slighty uninspiring cheap looking interior.

Roll on up sizing, bet VW are glad they didn't go ahead with making the next GTi a Hybrid now!

Glad they kept it below £30k there was an Autocar story saying it'll be £33k.

Looks 8/10, performace 9/10, value 9/10. I can even over look the slighty uninspiring cheap looking interior.

Roll on up sizing, bet VW are glad they didn't go ahead with making the next GTi a Hybrid now!

Think the ST3 models will be £33k (depending on options), which is about £5k up on what mine was in 2015 - might price themselves out of the market.

Of course it feels good from the passenger seat

Most cars do when there's a skilled pilot at the wheel, and they invariably feel faster when you are not in charge of the controls. I am old enough to remember when Ford managed to convince a certain journal that it's then new front drive Ford Escort was a winner, better even than the highly respected Alfasud around the company's own test track...

The Focus ST may indeed be a great car, but let's not pre judge.