Rakish-roofed version of the ID 4 is due imminently, and we've had an early taste of the hot GTX version
Open gallery
Close

The pace of Volkswagen’s electric vehicle push continues to gain momentum, as evidenced by the new ID 5.

This SUV-coupé arrives hot on the heels of the ID 3 family hatchback and the ID 4 SUV, on which it’s largely based. It’s a sister car to the Audi Q4 E-tron Sportback and Skoda Enyaq iV, alongside which it will be produced at Volkswagen’s dedicated EV factory in Zwickau, Germany, from early 2022.

Currently in the final stages of development, the third bespoke EV from Volkswagen was by all accounts set to be called the ID 4 Coupé. But in a move aimed at providing it with a higher perceived positioning than its slightly more versatile sibling, officials ultimately decided that it should take the ID 5 name instead.

Make of this what you will, but there’s no denying the links between the ID 4 and the ID 5. Even with the eye-catching disguise of the prototypes we drove, the similarities in front-end styling are clear. Apart from a uniquely styled bumper, the differences are negligible through to the B-pillars. 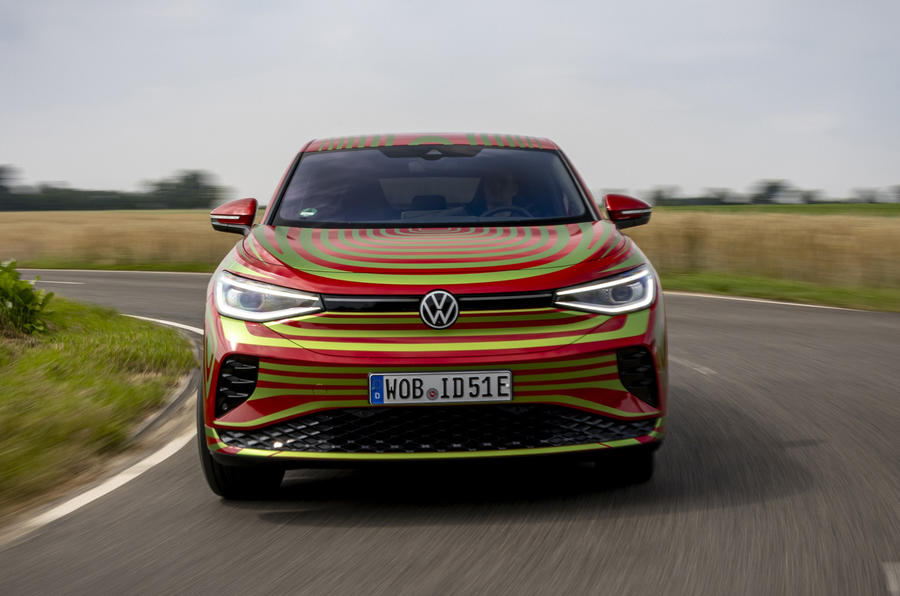 It’s at the rear where the ID 5 is distinguished in appearance, with a more heavily curved roofline, an angled, liftback-style tailgate and an integrated rear spoiler helping to provide it with a more eye-catching form than the ID 4. The standard wheels are 19in, although buyers will be able to choose optional 20in and 21in items.

The ID 5 uses the same electric drivelines as the ID 4. Included are 168bhp and 201bhp single-motor, rear-wheel-drive variants, as well as the more overtly sporting 295bhp dual-motor, four-wheel-drive GTX flagship, a prototype of which we’re driving here.

All three variants come with a 77kWh lithium ion battery pack. This represents a departure from the ID 4, which offers the choice of either a 52kWh or 77kWh battery. The maximum range of the entry-level ID 5 is put at 309 miles on the WLTP test procedure.

The ID 5 can charge at rates of up to 11kW from an AC device. And while Volkswagen is yet to confirm this, Autocar understands that DC charging capacity will be increased from the 125kW offered by the ID 4 to 150kW, in combination with a software upgrade that’s set to go into commission before the ID 5 reaches UK showrooms. This suggest an 80% replenishment in only around half an hour from a high-powered charger.

The ID 5 GTX’s performance is quite compelling in Sport driving mode, wherein all the reserves are called upon. The combined 348lb ft of torque developed by the twin electric motors (an asynchronous type up front and a synchronous one at the rear), as well as robust traction delivered by the four-wheel drive system (which includes a torque-vectoring function on the rear axle) endows the car with strong step-off and a spirited turn of acceleration up to typical motorway speeds. 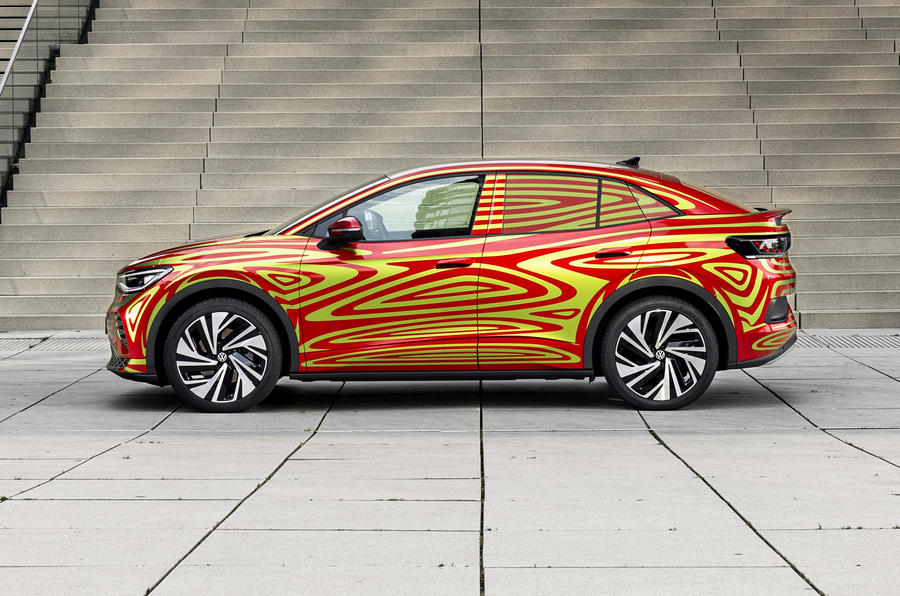 Beyond this, the initial urgency in the way it accumulates speed and overall throttle response begins to tail off as both rolling resistance and aerodynamic drag builds.

It’s a commendable cruiser, though, with the engaging flexibility to its delivery and excellent isolation of driveline noise making for relaxed progress over longer distances.

The synchronisation of drive at each end is very impressive, giving the ID 5 GTX a terrifically smooth deployment of power.

Volkswagen is yet to make any performance claims, but we expect a 0-62mph time and top speed similar to the 6.2sec and 112mph of the ID 4 GTX.

Recuperation of kinetic energy can be altered in two levels via the gear selector mounted high up to the side of the instrument panel. Drive gives you a coasting mode with little or no mechanical drag, while B (Battery) introduces quite strong retardation as you come off the throttle.

The steering is very accurate and nicely weighted for everyday driving. As we’ve noted with the ID 4, however, the progressive electromechanical system lacks for feel and often feels synthetic in its action. It does offer a useful 10.2-metre turning circle, though, making for excellent ease of manoeuvrability in congested urban streets, parking garages and the like.

Mounting the battery pacl low down within the the ID 5 GTX’s MEB platform provides for a low centre of gravity and, with it, encouragingly agile handling traits over more challenging roads, given its 2000kg plus kerb weight.

Grip is also in plentiful supply, thanks to the actions of the four-wheel-drive system and near-50:50 front-to-rear weight distribution, allowing you to confidently carry a good deal of speed into fast corners.

It isn’t hugely engaging to drive quickly, but the most sporting of Volkswagen’s ID models to date does offer a creditable amount of handling precision and security. 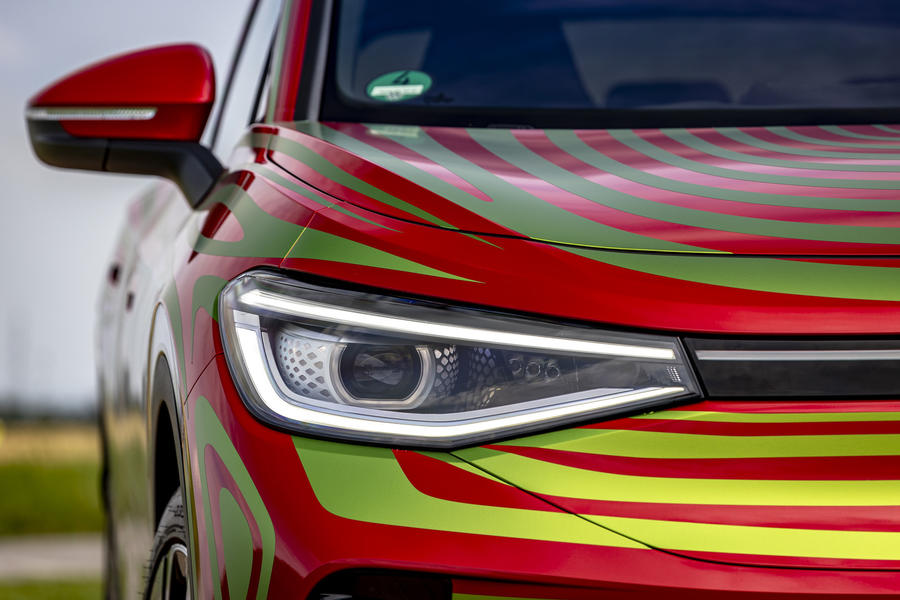 We were quite impressed by the ride of the ID 4 GTX on smooth German roads when we drove it earlier this year, yet, despite similar suspension tuning, our ID 5 GTX protoype felt less settled on more demanding bitumen. The firmness was evident even in Comfort mode on the optional 235/45 front and 255/40 rear 21in Hankook Ventus S1 Evo 3 EV tyres, especially at lower speeds, where it proved quite fidgety.

The overall ride improves as you gain speed, with the vertical body movements proving less severe when you up the pace, but it’s clear that the efforts to sharpen the handling have sacrificed some overall comfort.

We’re yet to get a good look at the inside of the ID 5. As with the exterior, much of the interior of our early prototype was covered. Volkswagen says that it shares its dashboard, infotainment functions and almost everything else with the ID 4, but expect some unique trim elements, upholstery materials and equipment packages to chime with its higher positioning.

With a roofline that doesn’t begin to slope in any great way until well back in the wheelbase, there’s still quite a lot of room inside. You get exactly the same accommodation up front as in the ID 4, while the rear loses only a centimetre or so of head room over its more upright sibling.

At 543 litres, the boot capacity is the same as in the ID 4. That said, the loading lip and the boot floor are set quite high, making it quite a heave to load heavy items.

The ID 5 GTX serves up strong performance and likeable dynamics, if not a lot in terms of engagement or feel. The differences in character between it and the ID 4 GTX we drove earlier this year are negligible, though, so the choice buyers will need to make with Volkswagen’s two electric sports SUVs is simply between looks and practicality. 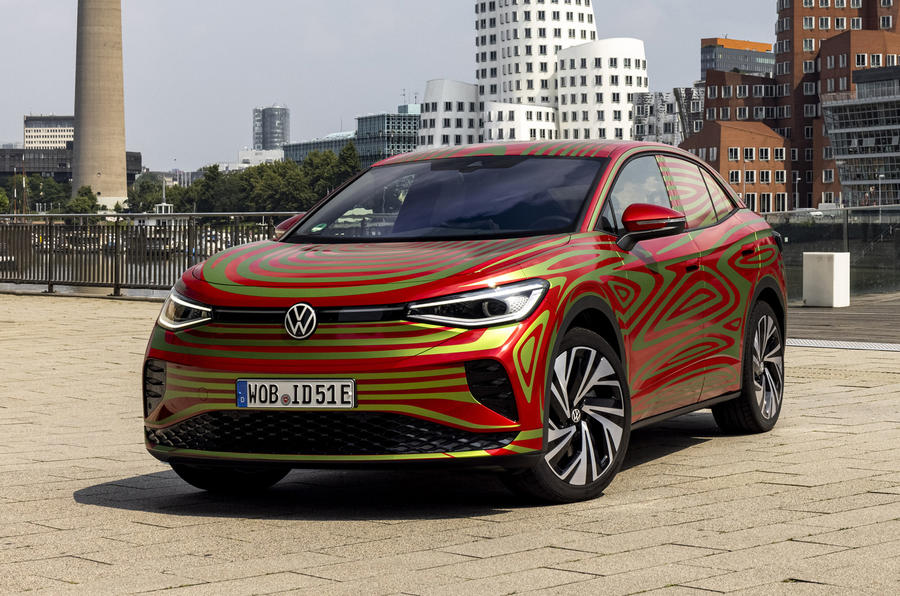 Confusing because each opinion is qualified - steering, engagement. So is it good to drive, or not?

From everything I've read so far, VW's ID cars drive well and are thoughtfully designed and enegineered. It's a shame then that they are so mind-numbingly dull-looking. They look like generic cars photoshopped for an auto insurance advert. The camo graphics should be offered as it's the only visually interesting aspect of this boring bar of soap on wheels.

I'd sooner get a slower cheaper Tesla Model 3 than this pointless turd.