Exclusivity, it seems, is a tricky balancing act. The world’s billionaires want their cars to be unique to them, but they haven’t got to their position of wealth by squandering their cash unnecessarily. The world’s luxury car manufacturers, on the other hand, have to think about bottom lines and boring (but essential) things like durability.

Price the car too high, or build too many of them, and a manufacturer can soon end up with a series of white elephants that damage the brand as a whole. It’s a wallet-melting trap that many have fallen into, but Bentley hopes it can avoid.

Hence the reason that the car you see here - the Bentley Mulliner Bacalar - is strictly limited to a ‘production’ run of just 12. Each one found a home within days of being unveiled and every single person who signed up when the car was launched in March 2020 is still committed, despite the ravages of you-know-what over those intervening 12 months. Impressively, despite the various lockdowns, the car is on track to start production on schedule next month.

The cost? Well, it’s all relative at this end of the market. The Bacalar starts at £1.5 million, with a significant proportion of the 12 examples being specced closer to £2m by the time all the customer’s extra personalisation touches are added. Hardly cheap, but given that customers are optioning approaching half a million quid onto the car, it would seem to indicate that Bentley judged the base cost correctly. 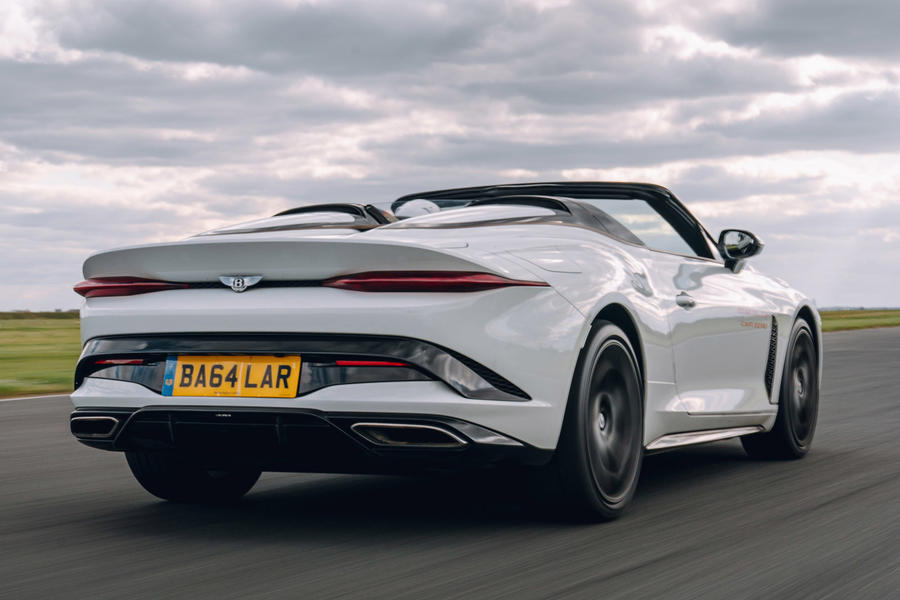 We should point out that the car in these pictures is not one of the 12. This is Car Zero, an engineering development vehicle that has undergone a rigorous test schedule (more on that shortly) but is also largely what customers will receive from the middle of this year onwards.

The Bacalar spearheads a new era at Bentley, one in which it hopes its coachbuilding arm, Mulliner, will lead a personalisation charge to give customers ever more exclusive cars (if the idea of ‘more exclusivity’ doesn’t sound like a paradox too far). Mulliner is the world’s oldest coachbuilder, starting out around 500 years ago when it specialised in four-legged transport.

Its links with Bentley date back to 1923, when it exhibited a two-seat 3 Litre Bentley at the Olympia Show in London. But the bond grew stronger from 1952, when Mulliner built the R-Type Continental, before the coachbuilders officially became part of Bentley in 1959.

More recently, Mulliner has three arms within Bentley - the Classic (where it's building recreation icons like the Blower), the Collections (where customers can spec personalisation options like unique paint or different wood veneers) and the Coachbuilt (where Mulliner will build entirely different versions of the series-production vehicles).

Which is how we’ve ended up here, snuggled into the wraparound cockpit of the Bacalar at a windy Bedford Autodrome. Customers of the regular Continental GT will recognise elements of the interior, but with detail changes that add up to more than the sum of their parts. The layout of the dials is familiar, but there’s a hint of gold highlighting around the edges. (Bentley refers to the colour as Dark Bronze.) The rotary control in the middle of the dashboard is clearly a Bentley part, but again, there’s a subtle ring of gold to give it a lift. The steering wheel is unique to the Bacalar, as is the gearlever, but both are still recognisably Bentley items. 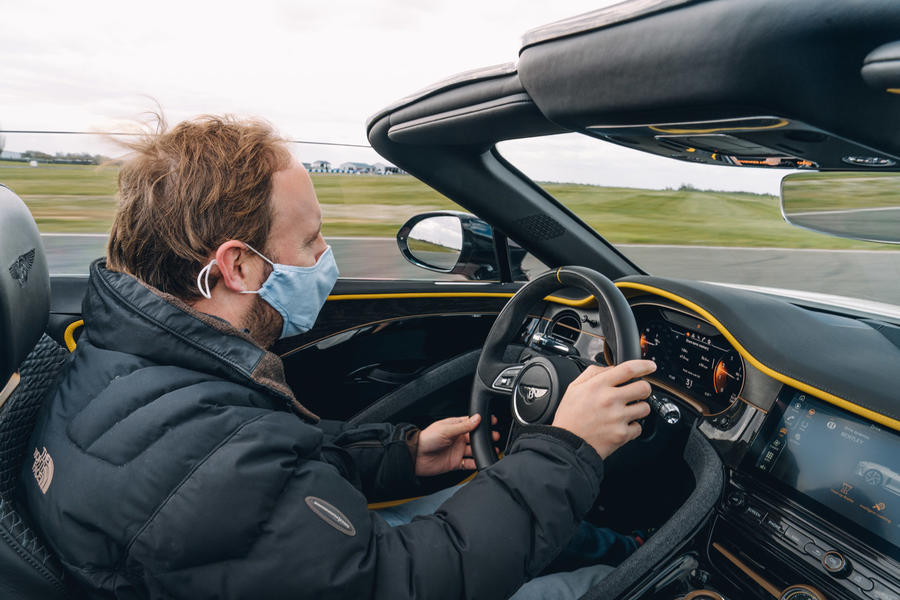 This is where the firm has been clever - giving the car enough differentiation but still keeping it as one of the family. It works well, remaining classy but special.

The door pulls, however, are a marked change. Instead of the normal metal handle, the Bacalar has leather straps - a luxurious twist on the canvas straps in the Porsche 911 GT3 doors. Leather abounds elsewhere, as you’d expect, while someone has even gone to the effort of counting how many stitches make up each seat. It’s 148,199, stat fans.

As ever with a Bentley, the wood is an important part of the experience. In the Bacalar, it’s 5000-year-old riverwood, a dark timber that’s been sat at the bottom of a bog in the Fens for quite a few years. It’s beautiful, with a tactility and quality that no man-made material can ever match. The open-pore upper section is particularly striking.

Sweeping around the centre dash and into the doors is a section of grey natural wool cloth. It also appears in the seat inserts, seat backs and side of the head restraints. Like the wood, it’s a touch-friendly material that demands you run your hand along it every time you jump in the car.

With the riverwood and wool, along with rice husk used in the paint, Bentley is keen to emphasise its sustainability tilt. It’s good that the firm is trying, but it does feel a bit like greenwashing. The Bacalar runs a 650bhp twin-turbo 6.0-litre W12 petrol engine: no amount of rice husks is going to offset that.

With all these elements, Bentley is keen to emphasise the car’s durability, both inside and out. The Bacalar doesn’t have a roof - hence why most buyers are European or American, where the weather is more predictable and less British - but the car has still been subjected to a punishing testing schedule. From minus 10deg to plus 80deg, Bentley’s climatic test is equivalent to 10 years’ use. Even the 5000-year-old riverwood was subjected to the same test cycle. 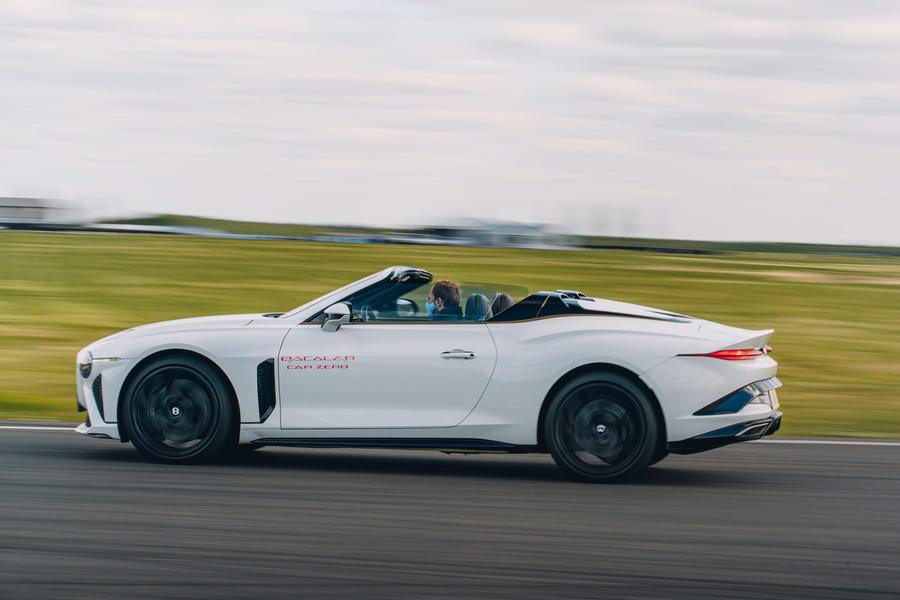 You’ll notice that this is a strict two-seater. Where the Conti’s rear seats normally lie are two sculpted storage areas, crafted for the Schedoni luggage set that’s available with the car. Personalisation options on the luggage are one of myriad ways that customers are speccing their cars.

The outside changes are even more dramatic. Every panel is different, with unique lights, ally rear clamshell and top deck, and carbonfibre panels elsewhere. All this requires unique tooling. Start to think of the engineering costs required for that, and for just 12 cars, and the £1.5m price begins to become understandable. In fact, the only items that are the same as on the regular Conti GT are the door handles and badge.

In total, there are 750 new parts, with a healthy dose of carbonfibre and additive manufacturing (3D printing) thrown in. Crucially from Bentley’s point of view, the hard points and platform are still Conti GT, although the rear track is 20mm wider. Not only does that mean crash testing is easier - Bentley can rely on the Conti’s performance so no Bacalars were harmed in the making of the Bacalar - but the car also drives in a similar manner.

Push the starter button and you’re greeted with the muffled muscularity of Bentley’s W12. A quick squeeze of the throttle and we’re off around Bedford Autodrome (as this is a prototype, we aren’t allowed to drive it on the road). There’s more turbo whistle than you get in a regular Conti GT, but it doesn’t sound uncouth and gives the car a bit more character. The engine sounds sophisticated rather than exciting, as that’s probably what customers want as they cruise the boulevards of LA or Nice.

The Bacalar has slightly more power than the normal Conti GTC, thanks to some software recalibration to deliver increased boost, plus tweaks to fueling and ignition maps. As such, it’s now 650bhp as opposed to 626bhp, while torque remains the same at an impressive 664lb ft, but it’s a struggle to tell any difference. It’s a blisteringly rapid car and feels more than capable of the claimed 200mph-plus top speed. There’s no sudden urge to alert you to the fact that you’re doing silly speeds,  just a gradual, but unrelenting, wave that means you approach figures well north of 100mph without really realising you’re doing so. Bentley hasn’t revealed the 0-62mph time, but given the Bacalar’s increased power but poorer aero, the Conti GT’s figure of 3.8sec feels about right. 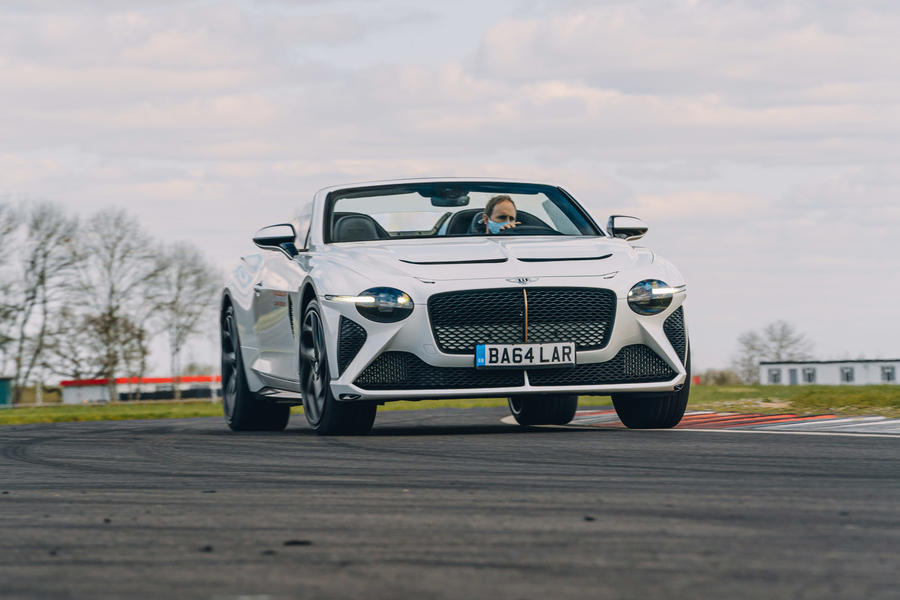 One thing that hasn’t altered is the weight. Bentley hasn’t confirmed the Bacalar’s kerb weight, but despite aluminium and carbonfibre usage, there’s a bulk and heft to the Bacalar that no amount of lightweight materials can disguise. Rapid direction changes don’t flatter the car as the tyres and three-chamber air suspension attempt to keep everything on an even keel. Fast, open corners make the back end squirm slightly. You can feel the car’s backside roll as it adjusts to the increased speeds at the exit of the bend. It’s never uncomfortable and, if anything, adds to the excitement because the car doesn’t feel inert, but the overall impression is of a machine that would be happier on the road, without the cornering forces that are possible on a circuit.

Of course, that shouldn’t come as much of a surprise. The Bacalar will largely reside on the south coast of France, and for that, it feels absolutely perfect. It wafts very well, with the wraparound cockpit doing a good job of reducing wind noise to a minimum and that air suspension keeping the worst of the Tarmac at bay. The Bacalar rides on 22in wheels, and you can feel the weight of those over sharp undulations, but it’s a civilised place to toddle along in. The silken nature of the W12 only reinforces the impression of a car that knows exactly what’s required of it.

Has Bentley tapped a new market for itself? Quite possibly. Half the buyers - admittedly that’s only six people - are new to Bentley. Usually, in the ultra-rarefied world of these sorts of cars, people have to have spent gazillions with the brand before they’re allowed into the limited editions. Not so here. It’s a customer-driven focus and hopefully one that will yield more special projects in the future. The world doesn’t need more of these sorts of cars, but want and need are two different things. If a profitable Mulliner helps Bentley, that’s no bad thing in my book.

Log in or register to post comments
275not599 10 April 2021
@Citytiger I was thinking Bentley Baklava, as it is gaggingly rich.
Peter Cavellini 9 April 2021

They've sold all twelve, they probably could sell more, there keeping them exclusive there...making money, what's wrong with that?

Bentley has gone to the disco. Oh dear