BACK TO ALL NEWS
Currently reading: Facelifted Freelander this summer
UP NEXT
Bespoke ‘Silent Shadow’ to start EV era at Rolls-Royce

A facelifted Land Rover Freelander will go on sale this summer.

Styling changes will be confined to minor modifications, focused on the front and rear ends.

These include a redesigned front grille, revised bumpers and LED daytime running lights.

The engine line-up isn't expected to be changed, although there may be combined power and economy improvements of up to 15 per cent.

The focus of Land Rover's development is currently on the LRX, which will go on sale this autumn, and which will be available as the first ever two-wheel drive Land Rover.

The LRX will be Golf-size coupe - whose interior is likely to focus on style instead of full-blown practicality.

It is due to make its public debut at the Paris show and enter production next year. 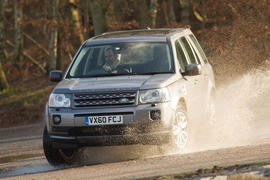 my neighbor's half-sister makes $84 hourly on the computer . She has been out of work for eight months but last month her income was $13147 just working on the computer for a few hours.
fhp11 18 May 2010

Re: Facelifted Freelander this summer

Whats with the huge climbing frame of a roofrack?

Re: Facelifted Freelander this summer