BACK TO ALL NEWS
Currently reading: Electric Jaguar E-Type Zero to enter production
UP NEXT
Prodrive P25 is uprated Subaru Impreza 22B with 400bhp

Jaguar Land Rover Classic, the company’s fast-growing heritage division, will sell original E-Types that have been restored and converted to run on battery power. It will also offer a conversion service for existing E-Type owners, alongside its current E-Type Reborn programme. First deliveries are expected in summer 2020.

The firm hasn't released full technical specs but says it is aiming for a range of more than 170 miles, using a 40kWh battery. The E-Type Zero Concept shown last year featured a 295bhp electric motor and had a claimed 150mph top speed - matching the original 1961 car - and a 0-60mph time of 5.5sec. The powertrain takes many of its components from the Jaguar I-Pace EV.

The battery of the E-Type Zero takes the place of the original's 3.8-litre six-cylinder iron-block engine under the bonnet, with the electric motor fitting in the space of the newly absent gearbox. The E-Type Zero weighs 46kg less than the original.

It also receives modified instrumentation, with a touchscreen available as an option. LED headlights are added, but otherwise the concept is described by Jaguar as "largely original".

The EV conversion will be fully reversible, allowing owners to refit the straight six if required. Jaguar is yet to release pricing information, but an estimate "north of £300,000" was given. The Concept Zero's most notable appearance to date was during the royal wedding earlier this year.

The birth of the E-Type Concept Zero

The Concept Zero, aptly dubbed Project Marmite in the early months of its 18-month gestation, is Hannig's brainchild.

An avowed old-car lover with his own classic collection, Hannig is quick to acknowledge that an electric E-Type won’t suit everyone and may outrage a few. But he has nevertheless coined the motto ‘We future history’ for JLR’s newest division, believing it must look to a time when big cities have zero-emissions zones, and to a new breed of buyers who desire classic motoring “without the oil leaks”. 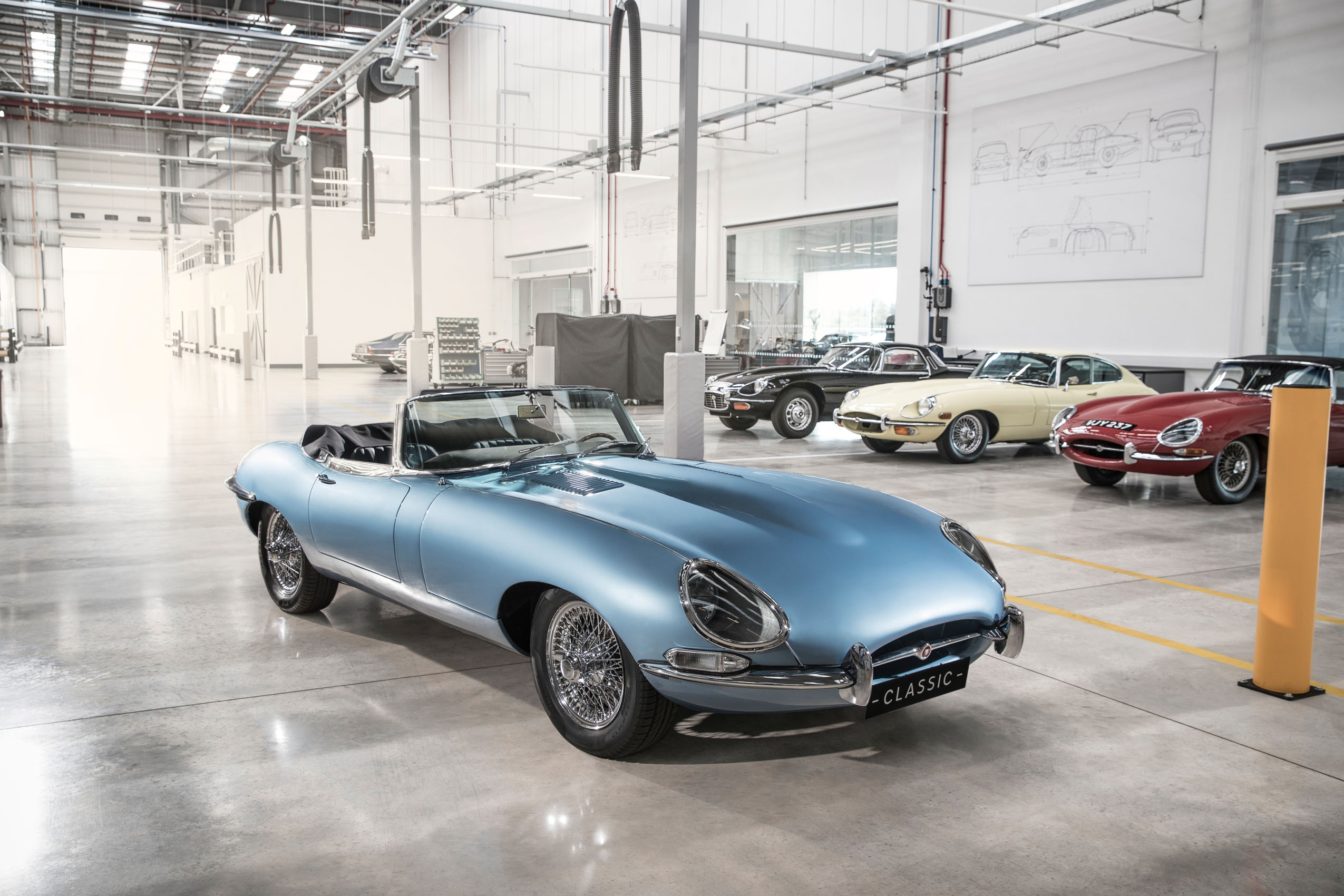 The Concept Zero’s saving grace from the purist’s point of view is that its electric conversion is designed to be reversible. Traditional mechanical parts will be retained so an owner can return a car to its original specification.

Beneath the long bonnet, the Concept Zero’s battery sits in the space formerly occupied by the E-Type’s famously heavy 3.8-litre six-cylinder iron-block engine, with the new drive motor (plus its single-speed reduction gearbox) in the space previously occupied by the four-speed gearbox. A modern Jaguar’s rotary controller dictates forward/reverse movement and no clutch is needed. The result of the work, remarkably, is a 46kg saving.

The electric powertrain connects to the rear wheels via the original tailshaft and differential. The inverter and power electronics sit in the boot. These components will be redesigned to save space (and improve boot room) utilising ‘family’ components from the I-Pace and other upcoming electric models, much as Jaguar spread the XK powertrain through its range 60 years ago. Having engineered this conversion for the E-Type, Hannig believes he has a set-up suitable for most Jaguar classics.

Riding shotgun in the 'EV'-Type 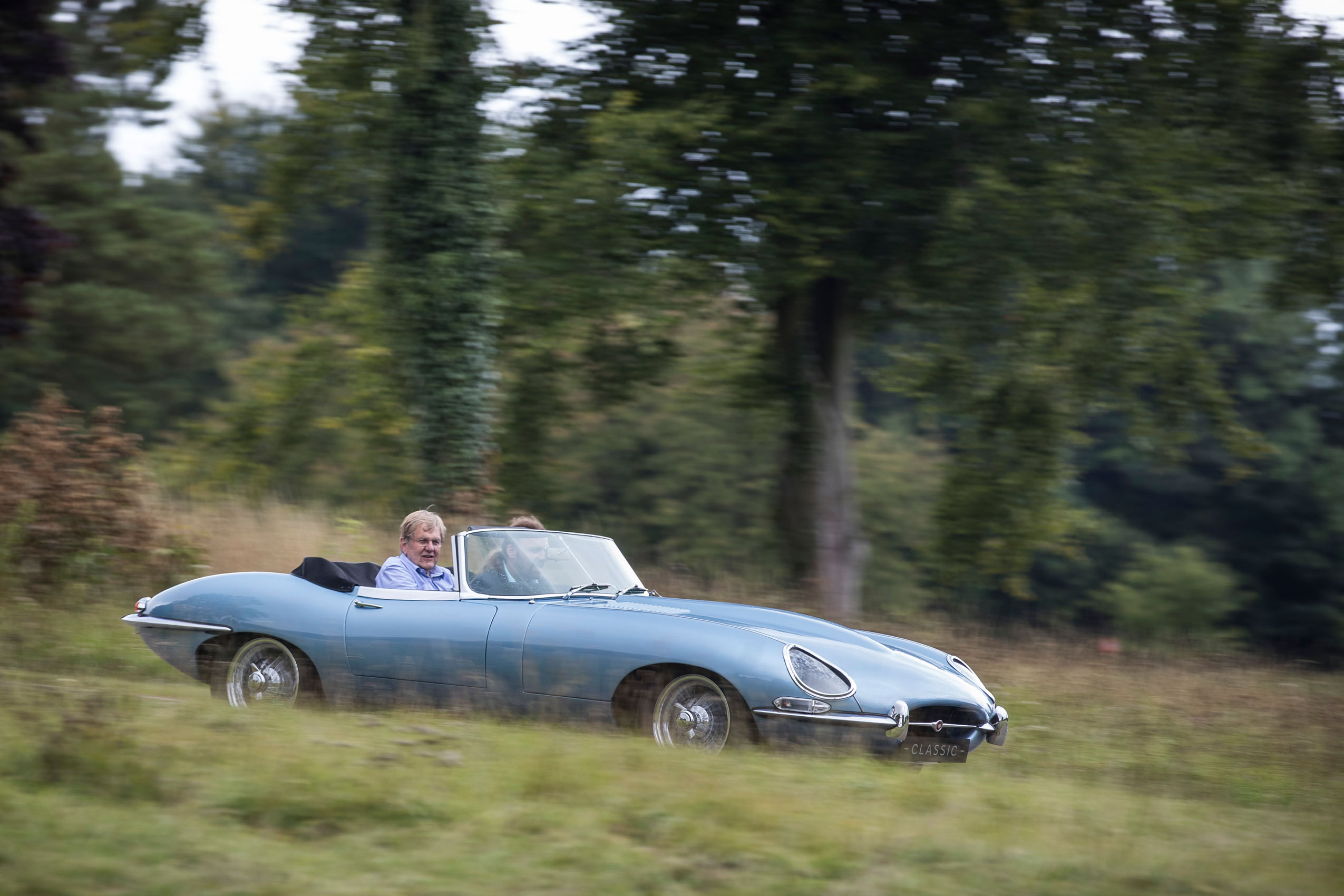 With Concept Zero’s project manager Stewart Bramham at the wheel, we hardly went faster than 40mph on a closed, single-lane road on London’s outskirts. But on this brief ride, it was still possible to feel the strong off-the-mark torque and the accurate response of the electric motor, whose faraway whirring, overlaid by a gear whine, gave the whole thing the surreal sound of a jet engine. Surreal or not, this was still an E-Type: same low seating, same high sills, same long nose, same wind curling at you over the top of the screen. Not sure it would suit me but, after this episode, I can see it might be just right for others less obsessed with originality.

Should we give this hare-brained project space in a serious motoring magazine? The purist in me says no, but the rest of me is just as sure we should.

JLR Classic is definitely pushing the envelope with this one; when the company got serious about building a heritage business a couple of years back, none of us imagined an electric E-Type would be in the frame.

But the modern car world is changing with bewildering speed, driven by legislation. Punitive laws already cramp old-car owners’ style and will do it more. And soon. Here is a bold attempt to find a solution to an emerging classic car problem, and to appeal to new buyers along the way. We should let it breathe.

The history of the Jaguar E-Type

I would have thought it would be cheaper to start from scratch, afterall they're capable of making every part of this 'simple' car.

I don't think this conversion will prove popular IMHO, certainly not as popular as building from scratch.

Wow, what an encouraging response

Five years ago this story would have caused the Autocar comments section to explode with rage.

Clearly this isn’t for everyone, and the cost is something only JLR could get away with, but it’s the shape of things to come for people who want to use a classic as a daily driver. Yes, we’ll be able to drive old cars in the future, but mileage is likely to be very limited.

I can’t wait for the inevitable self-contained electrification in a crate option to become available. My ancient MX5 would be an ideal recipient when I finally blow the engine.

Maybe VW will relauch an A2

Maybe VW will relauch an A2 electric a motor and spare wheel in the front (it could slide out from behind the front flap) and batteries under the back seat.