The fastest street-legal electric car in the world has broken its own world record by hitting a top speed of 205.6mph.

IMRA (International Mile Racing Association) certified the top speed of the Genovation GXE, which was set at the space shuttle landing facility in Florida. Genovation drafted in racing driver Johnny Bohmer to take the car to its maximum speed. The car’s previous record of 186.8mph was set in the same location earlier this year.

The GXE is a Chevrolet Corvette-based electric vehicle with two electric motors and a combined output of 500kW – the equivalent of 700bhp – and around 600lb ft of torque. The car’s maker says the decision to fit it with a six-speed manual gearbox was to make it a driver’s car and “you drive it just as you would the normal V8”.

In Genovation’s introductory video to the GXE, Larry Rihehart, who founded the company responsible for the car’s electric powertrain, highlighted the difficulty of installing the drivetrain into the car and fitting it together, something that Steven Rogers, Genovation’s co-founder and CTO, also highlighted.

Although Tesla’s Ludicrous mode enables the Model S to achieve a sub-3.0sec 0-62mph time, the Genovation trumps it on top speed because the Tesla is limited to 155mph. However, the Model S ultimately wins with its 270-mile range. The GXE  will run out of charge after 130 miles, according to founder and CEO of Genovation Andrew Saul.

Interestingly, the GXE’s predecessor was a converted Ford Focus that was intended for fleet operations and not made to break any performance records. Alongside this, Genovation has also created the GSL – an electric conversion of the first-generation Mercedes SL. 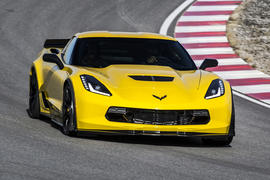 30 July 2016
First Tesla's record breaking accelerations now this one's 200mph+ speed record goes a long way to show that the electric car has the potential to beat the conventional car. About time the Big Germans take this powertrain seriously and come up with something to take on these electrifying gems from across the Atlantic.