BACK TO ALL NEWS
Currently reading: Defender-esque Bollinger B1 gets removable glass top
UP NEXT
Mercedes-Benz: electric C-Class likely to arrive after 2024

Bollinger's B1 electric SUV will be available with a fully removable glass top, in addition to the option of an aluminium roof, the company has announced.

Six pieces of glass, which can be removed individually or as one, make up the car's roof, locking into a non-removable roll cage structure. The side windows and rear screen can also be removed - the only glass which must remain in place is the windscreen, says the company. In the rendering of the model issued, the doors are also removed, although the company only states that "all glass (minus the windshield) will be removable."

The SUV was recently given styling tweaks during development, to improve the aerodynamic efficiency of the Land Rover Defender-like EV.

The American start-up electric SUV manufacturer says its B1 SUV, which it claims to be the most extreme and durable battery-powered off-roader, has been tweaked to allow airflow through the top of the bonnet from the front of the car, and setting the headlights in a grille.

The SUV, which is due to launch in mid-2019, formerly generated over 400kg of lift at the front, and almost 350kg of downforce at the rear. To equalise these, the front grille and bonnet vent concept has been implemented, slightly tweaking the look of the car's front end.

Bollinger Motors, based in Hobart in upstate New York, is in the final stages of developing its new B1 SUV. The all-wheel-drive machine features front- and rear-motors that combine to produce 355bhp and 472lb ft of torque. The power will be controlled by front and rear electronic locking differentials, and twin two-speed range gearboxes to control the torque.

It will be offered with a 60kWh battery, giving a 120-mile range, with the firm intending to offer a 100kWh battery with a 200-mile range. 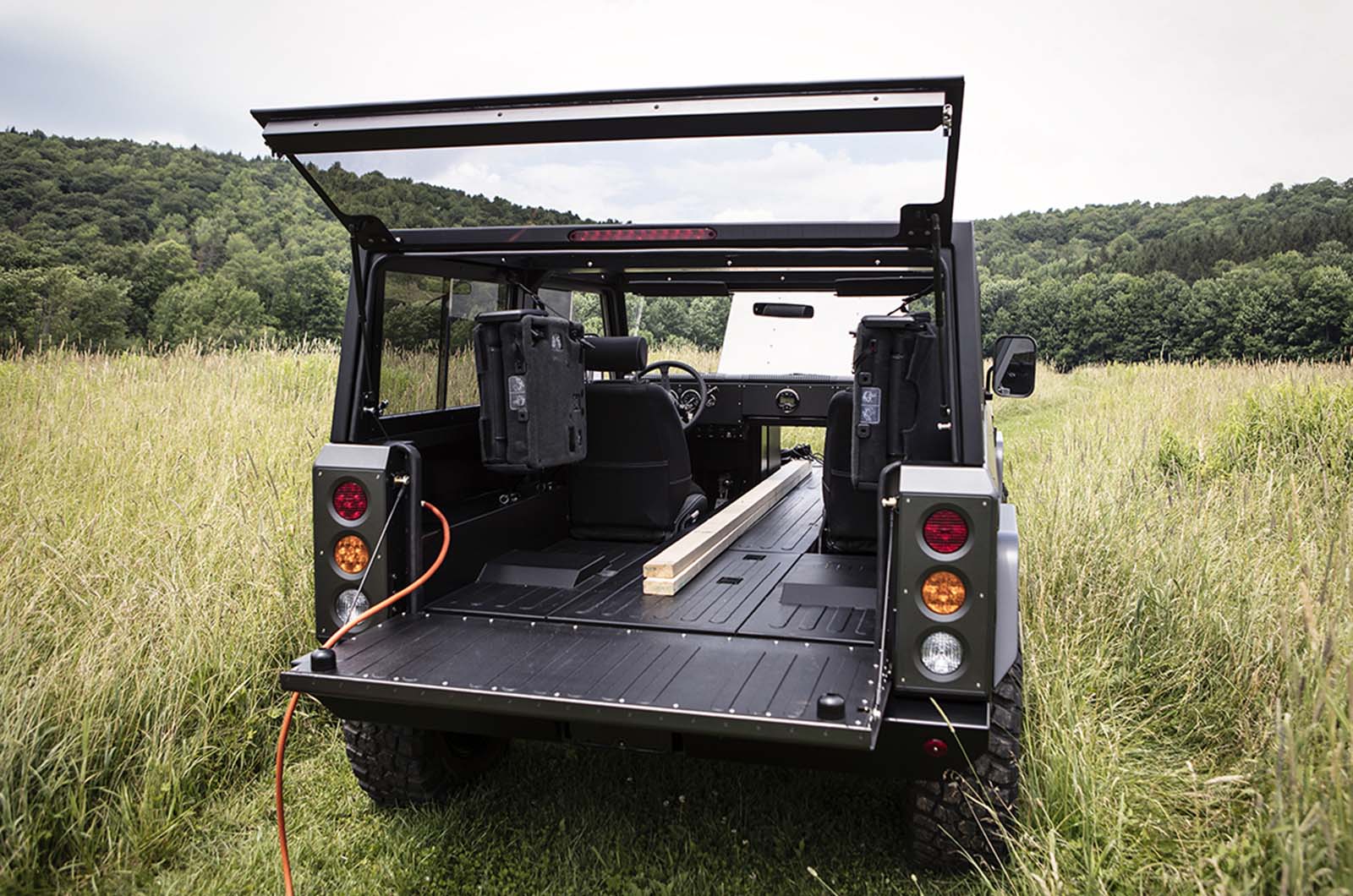 Bollinger engineer John Hutchinson said: “There’s no other electric SUV like this. Electric drivetrains are great for off-road use, because they offer plenty of torque at low RPM. The B1 is designed for fun off-roading, or for use as a farm vehicle. Those vehicles don’t travel great distances, so range is less of an issue.”

The machine features a stripped-out interior with a boxy exterior design that resembles a Land Rover Defender. It features aluminium chassis and bodywork, designed to make it easy to manufacture, practical for off-road use and simple to replace panels. A steel roll cage has been added for safety.

The B1 is designed for use in extreme off-road conditions, and as such has 15.5 inches of ground clearance and 10-inch wheel travel. It is 3810mm long and 1943mm wide, with a wheelbase of 2667mm. With the rear seats removed it has a 2690-litre capacity. 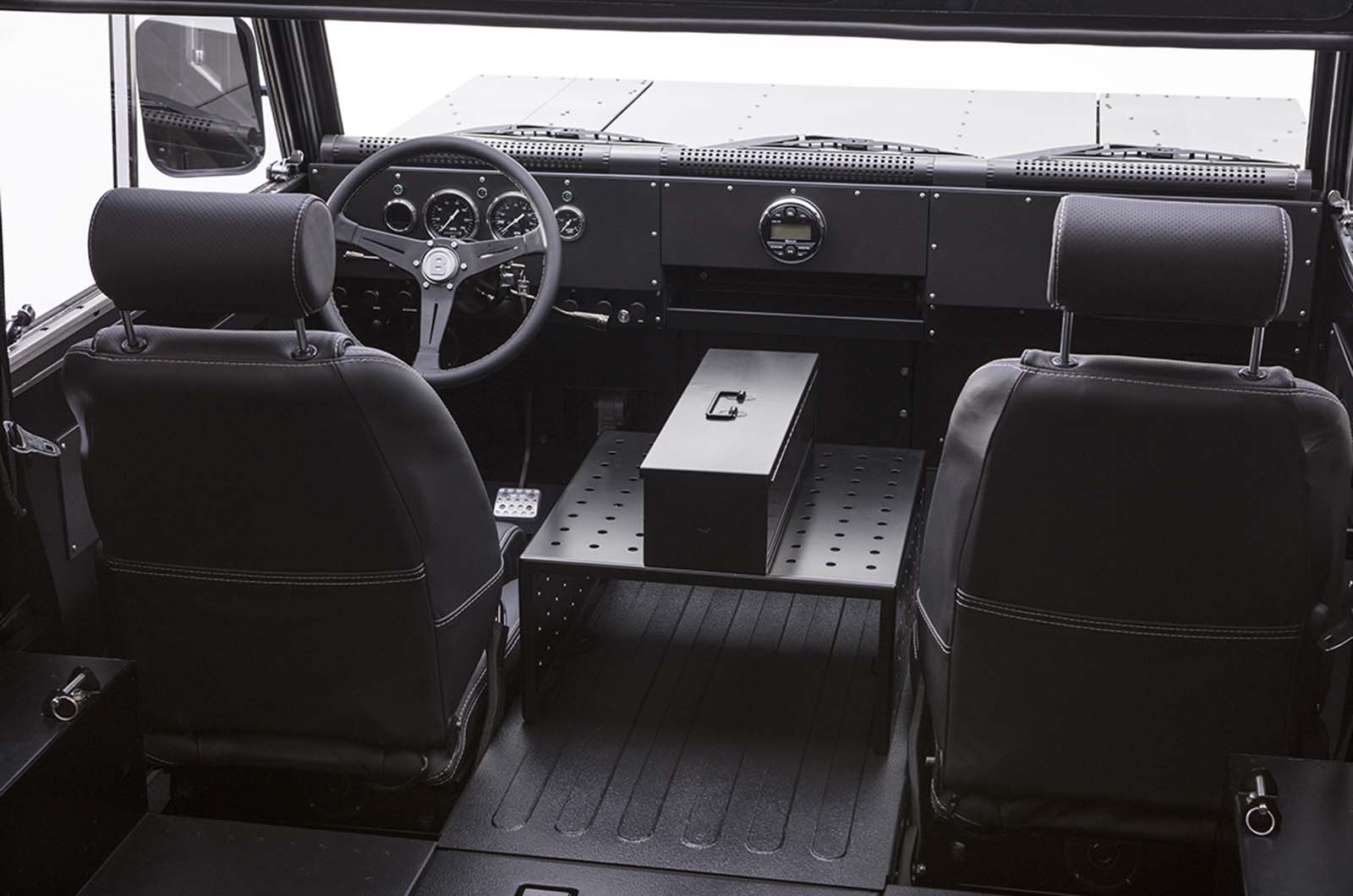 The design takes advantage of the lack of engine up front to feature a distinctive ‘pass-through’ area in the front storage compartment, allowing long loads to fit inside the vehicle.

The B1 was the idea of industrial designer Robert Bollinger, who founded the company that now employs ten people in 2014. The firm claims to have received 10,000 expressions of interest since the project was first announced, and is currently evaluating manufacturing partners in the US.

While the B1 is focused on the American market, the firm is aiming to start exporting models in 2020, principally to the Middle East.

Until I saw the new pics I didn’t realise the Car had a Glass Roof, looks like a Green house on Wheels!

So...what is the actual

So...what is the actual benefit of having six individual glass roof panels floating around the cabin?

Although I understand why the writer describes the Bollinger as Defender-esque, I wonder if this comparison will soon become redundant. There is every indication that the forthcoming Defender will have  markedly different styling to it’s forebears, in which case perhaps we’ll have to start using the phrase Wrangler-esque or G-Wagon-esque. That will be a shame.

The Bollinger does at least follow a well proven path for rugged 4x4’s, where form truly does follow function, whereas JLR is now clearly style-led.