BACK TO ALL NEWS
Currently reading: Chinese firm BYD to begin European expansion in Norway
UP NEXT
Porsche Taycan: new rear-driven base model takes price to £70k

Chinese EV manufacturer BYD has stepped up its plans to enter into the European passenger vehicle market and will launch its Tang EV600 electric SUV in Norway later this year.

The firm, which already sells electrified buses and coaches in Europe, has chosen Norway as the first country to receive the Tang on the basis that it has a strong charging infrastructure and existing strong demand for EVs.

The SUV’s arrival will be followed by the European launch of a range of electric commercial vehicles, including a panel van, a yard tractor and two sizes of lorry.

The Tang, now in its second generation, is available with five or seven seats, and its 82.8kWh battery is claimed to offer a range of 373 miles on the NEDC cycle - although this figure will likely drop after the car is subjected to mandatory WLTP range tests.

It features an electric motor on each axle for permanent four-wheel drive and has a combined power output of 483bhp - 81bhp more than the Audi E-tron. It's said to accelerate from 0-62mph in 4.4sec and be capable of fast charging in as little as 30 minutes - although it's unclear whether that quoted figure is for an 80% or 100% charge.

Pricing hasn't yet been confirmed, but a starting price of around RMB 260,000 (about £29,600) in China means the Tang is likely to significantly undercut its Western rivals when it arrives in Europe.

Isbrand Ho, managing director of BYD’s European division, said: “Norway is the most advanced market in Europe when it comes to the widespread adoption and usage of electric vehicles, as well as possessing a comprehensive charging network. We will closely evaluate how the market performs but, in the longer term, it is our aim to expand passenger car sales beyond Norway.

“We are delighted to be expanding our portfolio with the addition of these new pure-electric vehicles. This is another milestone in our commitment to protect the environment, contributing to the reduction of emissions and cleaner air in Europe.

“During our marketing trial, we are confident that the BYD Tang’s range, design, practicality and high-level technology will appeal to discerning European buyers.”

The Tang won't be the first BYD car to be available in Europe. In 2013, a fleet of 50 BYD e6 electric hatchbacks was imported to the UK for use by private hire firms. The model was also selected by authorities in Brussels for use as a taxi in the Belgian capital. 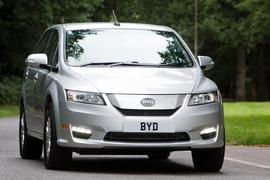 Overpriced, battery-powered Chinese crossover has plenty of potential, not much sophistication

The only question on people's

The only question on people's minds would be how long will it take before the Tang's dc motor fails or its suspension arms collapse. Or whether it would stand an off-set impact of more than 10 mph before disintegrating into 620 different parts.
As an aside I don't think it's the best timing for a chinese EV maker to launch in Europe given the widespread backlash against the Chinese government for their handling of the covid19 pandemic. In fact it would probably be wise for BYD to abandon their Europe entry altogether.
ianp55 4 May 2020

I'll believe this when it happens,what happened to the 50 EV's that BYD bought to Blighty for trials?