Mercedes tuner Brabus has revealed its latest high-performance SUV. The Brabus B63-620 Widestar is based on the Mercedes-Benz GL63 AMG, but sees power boosted further, and bodywork extended 80mm to create a wider stance.

The GL63 AMG’s 5.5-litre biturbo V8 has been boosted from 550bhp to 611bhp using Brabus’s PowerXtra plug-and-play remapping software. The revised injection and ignition mapping allows the car to accelerate to 62mph in 4.7sec — 0.2sec less than standard — and on to a top speed of 174mph.

The exhaust system features butterfly valves to increase engine volume on the move. A 'Coming Home' mode dampens the sound.

Wheelarch extensions — part of a bodykit that includes new bumpers and a roof spoiler — allow the Brabus GL to be fitted with 23in forged alloy wheels and 305/30 tyres.

No prices have been revealed, but expect a significant hike over the standard GL63 AMG’s £91,715 price tag. 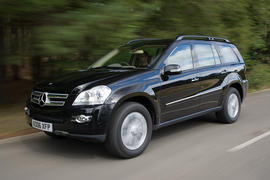 There is something rather

There is something rather wonderful about making this HGV so fast. Completely pointless, but still wonderful

No there isn't. Should be

Should be outlawed, pile of pointless sh!te.

I agree with you fully...

its completely pointless as is a supercar that can break 200mph but its a work of engineering genius.

Things like this are the reason I'm into cars and I for one I'm glad it exists.

imagine how dull the world would be if everything deemed pointless, stupid and even vulgar were outlawed.

Now, that would be sh!te.

People who buy it will have

People who buy it will have more money than class: rich peasants like feetballers and rappers.

You'll need a footballer's salary to pay for those 23" tyres.

since when did autocar forum

since when did autocar forum dwellers become arbitures of taste? i for one am glad that brabus has the balls to piss off the green brigade

Widestar by nature. This SUV will be 2062mm wide from wheel edge to wheel edge. That's 6 foot 9.2 inches and most width restrictors, in London at least, are 7 foot. So that's less than 3 inches gap, or an inch and a half each side. You'd have to be brave to risk it... Still, I'm in favour of cars like this if that's your bag. Not mine, though.

It is really a worthless word that Mercedes can cross 611bhp.  This car  itself having good facilities mileage and all but this much of mileage is not possible for any vehicle. People like to purchase this vehicle because of good mileage. This rumor may affect this brand but the familiarity of Mercedes will be always present in the society.