BACK TO ALL NEWS
Currently reading: Aston Martin Vantage GT8 revealed
UP NEXT
Alfa Romeo to show new sports car in early 2023

Aston Martin says this is the most driver-focused V8 Vantage ever produced; only 150 to be built at a price of £165,000 each
Open gallery
Close

Aston Martin has revealed its latest limited edition sports car, the Vantage GT8, a model inspired by the GTE race car programme with which Aston Martin competes in the World Endurance Championship.

The GT8 follows in the wake of the successful, limited-run Aston Martin GT12 of last year. Just 150 examples of the GT8 will be sold, costing from £165,000 apiece.

Unlike the GT12, the GT8 — as its name suggests — is based on the V8 Aston Martin Vantage, which has a 4.7-litre engine, rather than the larger-capacity Aston Martin V12 Vantage S, which uses a 6.0-litre engine. In the GT8, the V8’s power has been increased by 10bhp over the regular Vantage, giving it 440bhp, with drive being sent to the rear wheels via either a six-speed manual gearbox or a seven-speed.

7 Aston Martin specials the GT8 has to live up to 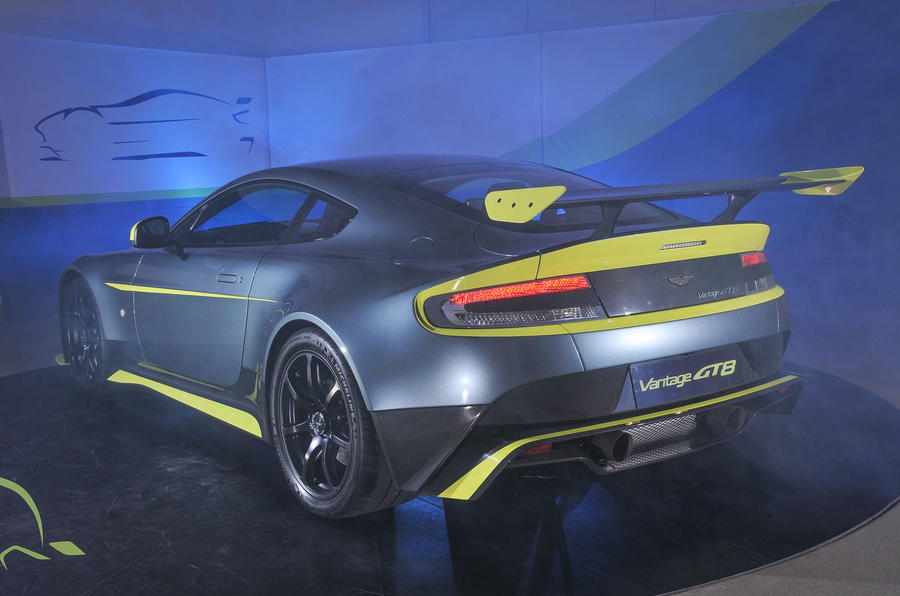 Sportshift single-clutch automated manual gearbox. The GT8 won’t be offered with the seven-speed manual transmission Aston has been developing.

Of more significance is the GT8’s weight. Because it is inspired by the WEC racing car, the GT8 has benefited from a significant weight reduction programme and an optional aerodynamic package said to mimic that of the race car.

With wider, carbonfibre body panels, a lighter exhaust system with the secondary catalysts removed and magnesium wheels as standard, plus acrylic plastic windows and a lithium ion battery as options, the GT8 weighs up to 100kg less than the standard car, making it the lightest and most powerful V8 Vantage yet made. The wheels save 8kg all round and the battery saves 17kg, and it’s even possible to specify plastic rather than glass switches in the cockpit, although that saving is measured in grams Those statistics, along with the car’s exclusivity, have been enough to ensure that Aston Martin had sold three-quarters of the car’s 150-strong allocation before it was officially announced. Around a third of the build, run is likely to remain in the UK, with the rest split equally between Asia and mainland Europe, when deliveries begin in the autumn. 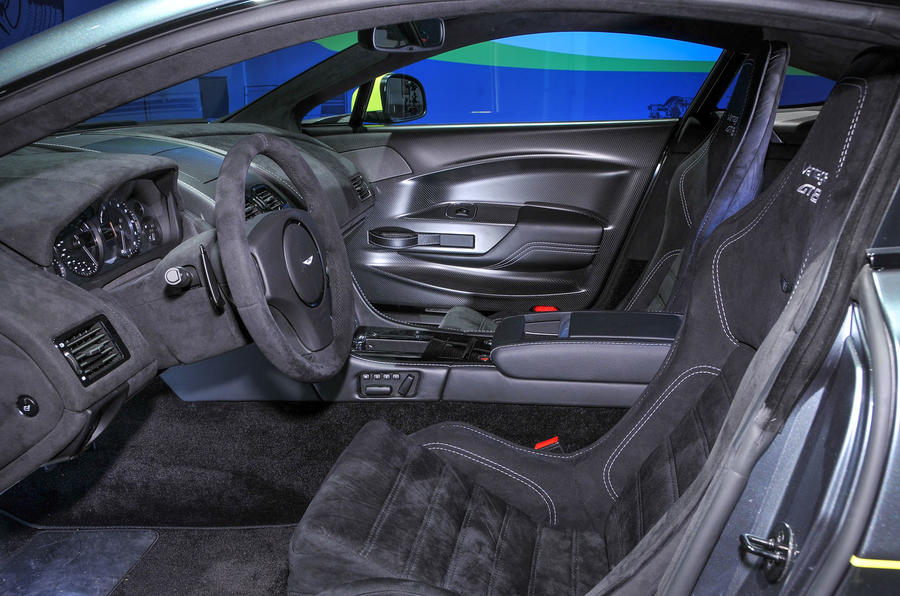 The GTE race car weighs some 400kg less than the road-going GT8, which, apart from the absence of leather upholstery, retains much of the regular Vantage’s interior, while power is around 480bhp. The GTE also receives some significant aerodynamic modifications. It must share the same body silhouette as the road car, but aerodynamic addenda are given more freedom.

The GTE racing car sits in the middle of Aston’s competition line-up, above the 4.7-litre GT4, which has the same powertrain as the V8 Vantage road car, but beneath the V12-powered GT3 racer that inspired the GT12 road variant (which was itself going to be called GT3 until Porsche complained).

Some of those aerodynamic changes are recreated for the GT8, although they are optional extras rather than standard fit as they were on the earlier, more expensive and more exclusive GT12, which cost £250,000 and was limited to a 100-strong build run.

Likewise, the GT12’s vented bonnet isn’t an option on the GT8, in order to retain a differentiation between the two limited-edition models. Both front and rear elements of the GT8’s aero package, incorporating a large front splitter and a huge rear wing, have to be specified together because only having one or the other would upset the car’s downforce balance. 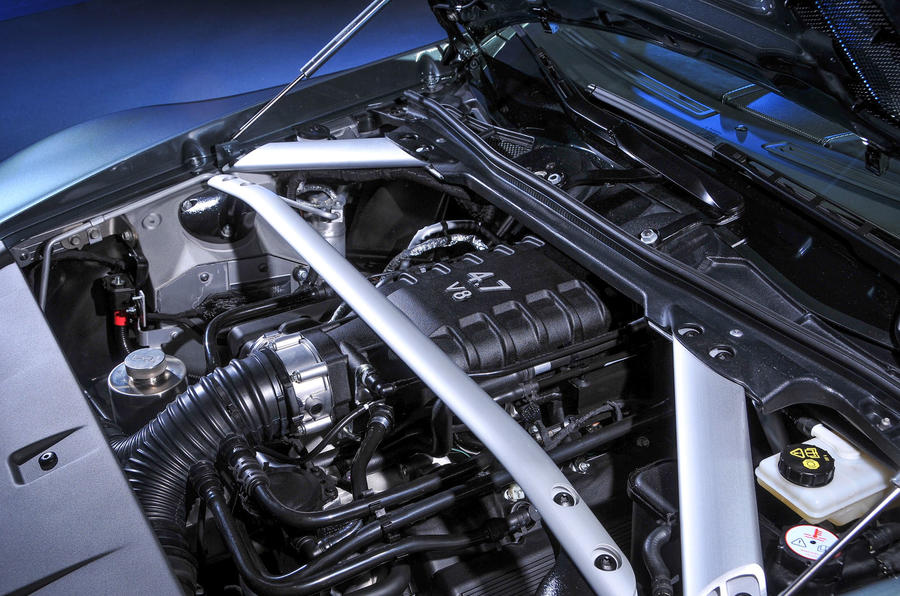 Speaking exclusively to Autocar, Aston Martin design chief Marek Reichman said the exterior changes “were all about enhancing the aero package but not adding any weight”, so in addition to the splitter and wing, there are aerodynamic improvements via the body surfacing itself. “You can see from the front wing where we’re releasing high-pressure air from the wheel arch,” said Reichman.

As with the GT12, the GT8 is available in some ‘halo’ colours, including the same shades — Stirling Green with lime — and a similar scheme to Aston’s GTE cars. Also available is white with green highlights, and silver with blue. Production of halo-colour cars will be capped, however, because they greatly increase the GT8’s build time due to the car being returned to the paint shop for the contrasting colour details to be added after it has been assembled. If those were painted initially, there’s a chance they wouldn’t line up once the body panels were fitted to the car.

Reichman says GT8 customers are tending to be fairly extreme with colour and specification choices, allowing their “wild side” to come out and “putting the graphics on, choosing all the options and enjoying the car’s analogue feeling. So far we’ve seen a great response in terms of customers wanting to show the true spirit of what Vantage GT8 is all about.”

Other options available on the GT8 include carbonfibre badges, a carbonfibre grille, carbonfibre lower valences and a carbonfibre roof, although the last option barely saves any weight because the car’s ‘VH’ architecture means the roof isn’t a load-bearing panel. 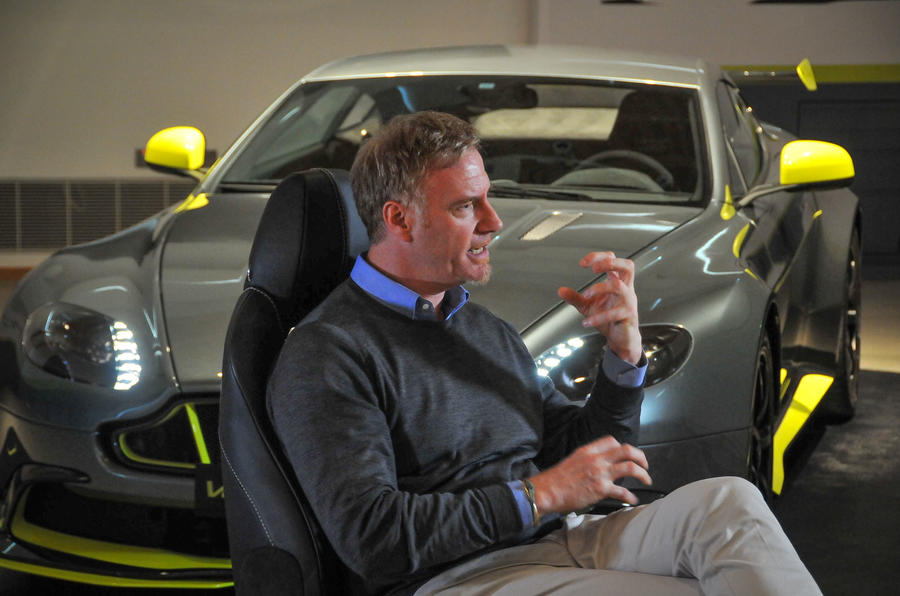 Quite how the GT8 will drive we’ve yet to discover, but Reichman describes it as “very dynamic”. Aston claims the GT8 is the most driver-focused V8 Vantage it has yet made, and the dynamics team, under the leadership of Matt Becker, have done a surprising amount of work on the ride and handling characteristics.

The end result is intended to start putting more clear space between different Aston Martin models, according to Reichman. “We have a much broader visual language that will go into Aston Martins and therefore the driving characteristics,” he said.

The GT8 is the first of two special edition cars that Aston Martin will launch this year. Aston is planning on launching two every year, capitalising on the market’s increasing demand for limited-run special edition cars such as this or, for example, Porsche’s Cayman GT4 and 911 R models.

Not all specials will be race-inspired, but are said to augment the core range. “It’s taking a walk on the wild side and doing the unexpected,” said Reichman.

The core range itself is also undergoing a massive new product rollout, starting with the upcoming DB11, which is said to have a much more compliant ride quality, as befits a GT car, than the outgoing DB9. The range will also be supplemented by the DBX crossover before the end of the decade. “The DB11 is the start of our second-century plan, a six-year plan,” said Reichman. “There’s a cadence, and every nine months there’s a new product coming.”

How does a project as extreme as this start?

Within my role, [Aston Martin boss] Andy Palmer gives my team and me license to go out, be creative and do cool stuff. We did it with the GT12, and sold out all 100 cars.

With the GT12, we learned how to develop lightweight parts and how to further improve the Vantage and take it more into the road-going track day space. This is a space I’ve been itching for us to get into. We’re doing this again, but this time playing to the strengths of the V8 Vantage.

The GT12 Vantage is a big bruiser, whereas the GT8 is lighter, more dynamic. We looked at the strengths of the V8 Vantage and then built in elements of the GT4 race car as well. We had the nod to make it as extreme as we can.

Is it still a car you can drive comfortable on the road?

It’s still a road car, but it’s important for the credibility of the car that it can go on track and hold its own. This arena has been dominated by Porsche for years. But it’s an increasingly important market as it’s becoming harder and harder to use a high-performance car on the road. Track days are becoming more important to ensure these cars are relevant.

This is still usable on the road, though. It’s stripped out and a lot of the NVH stuff has been removed, but it’s usable.

How closely do you look at Porsche’s success with its GT cars?

We have to look very closely at Porsche. It’s amazing what they have done with the GT cars, and the market demand is there for special versions. We drive them, keep an eye on them. We’re not competitors, and only want a small slice of that segment.

Porsche actually did us a favour with the 911R at the Geneva show. They made a car that’s stripped out, back to basics, and at a premium price. It shows there’s interest in the market.

These GT models are something I’ve been keen to do, because we’ve been missing out on people looking for extreme products. The GT12 really hit the spot. There was a high level of conquest sales and new people coming to the brand. The hardest thing is to get people into the brand and then keep them.

I’ve driving one of the final prototypes this weekend. So far, it’s been sensational. The way it turns in, the precision, balance; it’s like the V8 Vantage but with so much more. The chassis has been retuned and there is more power and torque. It’s really crisp and with great responses. It’s as close as you can get on the road to the GT4 race car.

How much more to come is there from this Vantage?

The Vantage is enduring very well. We’ve made it for a while, and will continue to do so for a while longer. I’m sure there is more to come. We’ve been very careful with the GT8 and GT12 in limiting the numbers and sticking to them, which is important for credibility. If we’re oversubscribed, great. It’s a proper job inside and out, but maybe there is more to come still.

I'm saving my shekels, to buy

I'm saving my shekels, to buy a maserati for £10k.