BACK TO ALL NEWS
Currently reading: Aston Martin Vantage F1 Edition gets power hike, hardcore look
UP NEXT
Worth the weight? Lotus Emira first ride

It is described as "the first core model to benefit from direct input from Aston Martin’s recently appointed Chief Executive Officer, Tobias Moers", and arrives as the British firm makes its return to Formula 1 after a 61-year hiatus.

Essentially, mechanical and styling upgrades mirror those applied to the safety car, though the F1 Edition goes without the extra screens and communication equipment necessary for in-race operations.

Power from the Vantage’s 4.0-litre twin-turbo V8 is up from 503bhp to 528bhp for the new series-production F1 Edition, and Aston claims 505lb peak torque output is “sustained for longer to further increase tractability and in-gear urgency”. Modifications to the gearbox make for quicker shift times and, according to the brand, improved powertrain control during braking and deceleration.

Underneath, the Vantage F1 gains extra chassis reinforcements at the front end for improved stiffness, while upgraded dampers are said to improve vertical body control “without any deterioration in low-speed compliance”. Rounding off the dynamic upgrade package are stiffer rear springs and a tweaked steering system that boosts feedback. 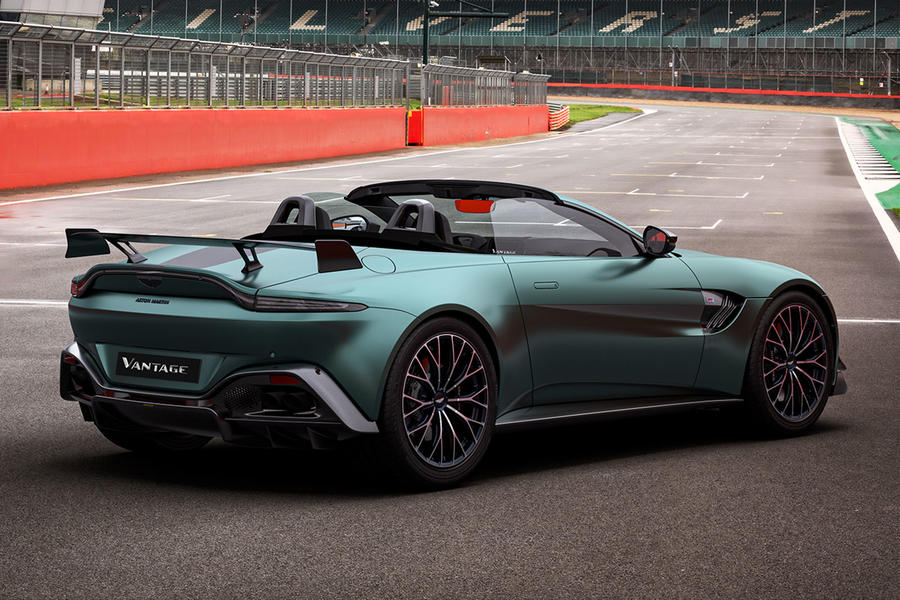 Visually, the F1 - available in both coupé and drop-top guises - is distinguished from the regular car by its larger 21in wheels with a bespoke design and low-profile tyres, a substantial aero package that boosts downforce by 200kg at top speed, carbon fibre detailing all over and a unique vaned grille design.

A new shade of Racing Green, inspired by the F1 team's livery, is available, as are black and white - all available with a satin or gloss finish and decorated with a matte grey racing graphic.

Moers said of the first production Aston Martin model launched on his watch: "The Vantage was already the most focused sports car in our range but in the development of our official safety car of Formula 1, it had to be a true athlete: more powerful; more agile; more immediate and more exciting to drive. And - of course - quicker and more capable in a race-track environment.

"I set the engineering team a tough target, as I was insistent that gains in performance came via genuine improvements in the car’s dynamics, and not by fitting track-optimised tyres. The results speak for themselves."

Prices start from £142,000 - a premium of around £21,000 over the standard Vantage - and customer deliveries will get underway in May.

Log in or register to post comments
jason_recliner 22 March 2021
Wow, what an absolute stunner. You know it looks great when even Symanski agrees Reichmann is on to a winner.
Cersai Lannister 23 March 2021

Making Hay while the Sun shines?, it's the pace car for the F1 this year, so adding a few bits etc and charging £20K extra for decals, there will be punters for them though.