BACK TO ALL NEWS
Currently reading: 2023 Audi A6 facelift spotted during on-road tests
UP NEXT
Spending 48 hours touring in a Ferrari Roma

The new, facelifted Audi A6 has been spotted testing on public roads by our spy photographers.

The images show a saloon variant of the popular executive Audi sporting a black and white livery at the front and rear to obscure the model’s revised lines, with the mid-section of the car left uncovered.

The precise details of the model’s new look are not clearly visible, but the A6 will gain a subtle styling update over its predecessor. The front end features a newly designed, bulky front grille, sharp headlights and revised air intakes.

At the rear, the lower bumper now appears to be lower to the ground and the rear lights have been reshaped.

The current car has been on sale since 2018 in saloon and Audi A6 Avant estate bodystyles. Both of the prototypes photographed were saloon models.

Audi has not yet detailed powertrain information for the new A6, but it’s expected that the model will retain its range of petrol and diesel engines. 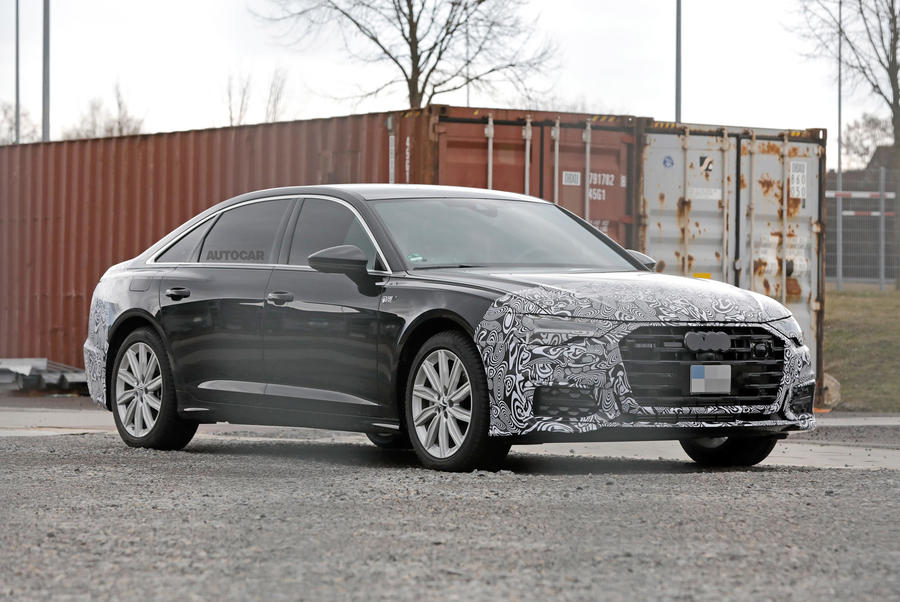 The A6 was Audi’s ninth most popular car in terms of sales last year, selling 5789 units and outselling the Audi Q4 E-tron, the Audi Q7 and the Audi TT.

The rugged A6 Allroad was recently removed from the line-up, with Audi citing slow sales. The model sold just 256 units in the UK in 2021 – less than half of the number of performance RS6 Avants sold in the same period.

Audi previewed the potential future direction for the A6 in 2021 when it revealed the Audi A6 E-tron Concept, based on the firm’s PPE platform.

The concept had Quattro all-wheel drive, with an electric motor on each wheel, 435 miles of range and a total power output of 462bhp.

Improved PHEV exec saloon gets a bigger battery but what else does it have to offer?

Lost a bit of its audio look from certain angles?, a bit Vauxhall Cavalier from the rear three quarter view?

Just Saying 16 February 2022
I find myself partially agreeing with you Peter. Rare! Audi (or Audio), should be mindful that this A6 and the A8 seen here the other day, are becoming instantly forgettable...
Just Saying...