BACK TO ALL NEWS
Currently reading: 2016 Porsche 718 Boxster - first ride
UP NEXT
Fisker goes radical with Pear EV SUV

Next year Porsche will reveal a new Boxster powered by a turbo flat four. We join the test team in Canada to see if this will still look and feel like a Porsche
Open gallery
Close

It has taken us more than 18 hours, with multiple transfers, to get to Yellowknife, in Canada’s Northwest Territories, from Germany. But there’s a good reason for it. We have been fortunate enough to be asked to join Porsche’s severe winter tests of the next-generation Porsche Boxster.

Read our review of the Porsche 718 Boxster

Alex Ernst, the chief conductor of this secret test, explains to us that even though there are other possible locations in northern Europe with the similar latitude, such as Ivalo or Rovaniemi, both in Finland, Yellowknife is better suited to this type of testing because of the consistency of the low temperatures – around -20deg C – from December through to March. He also adds, with a wink, that although Canada’s snowy wastes are filled with harmless tourists from Japan here to see the northern lights, there  are no automotive paparazzi.

Read our review of the Porsche 718 Boxster S

Given the promise of such cold conditions, we’re a bit disappointed that the temperature is a positively warm -6deg C when we arrive, although it drops to -11deg C by the next morning. The next-gen Boxster is covered with snow when it appears in front of us in Yellowknife. After the crew finish scraping the ice from the windscreen, we head to the testing site outside of Yellowknife’s city limits. 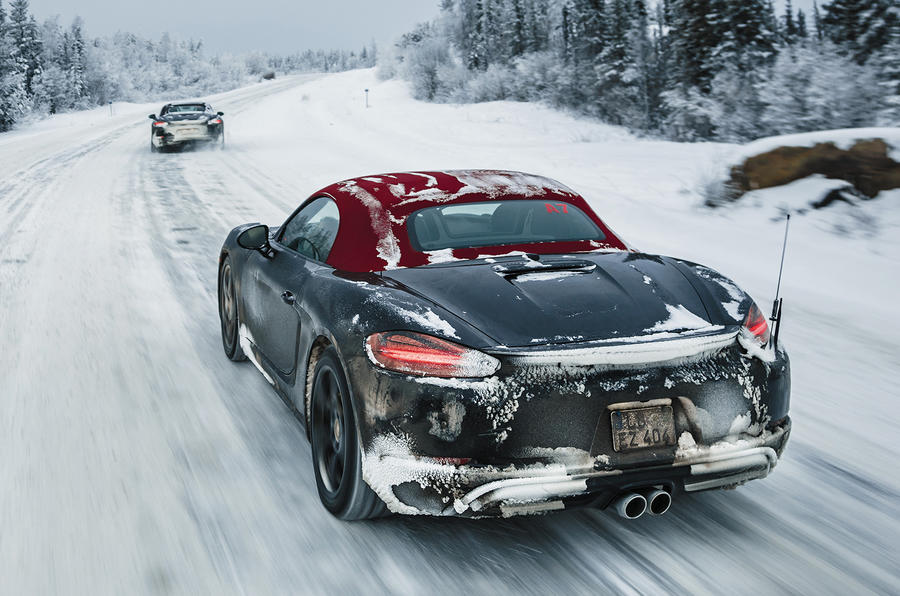 “You may think these are extraordinary conditions for a test drive,” says Joachim Meyer, Boxster chassis specialist and my driver for the morning. “However, we are simulating the daily commute for general drivers and evaluating the efficiency of the heater and defroster, or checking the warmth of the seat heater. The steering wheel heater is also tested. Porsches are sports cars, but that doesn’t mean we can ignore comfort.”

The 986-generation Boxster was born in  1996. Three generations later, Porsche’s roadster  is facing a significant turning point in its evolution. Its bigger brother, the 911, has already gone through the transition to downsized engines with turbochargers.

What we know today is that there will be two types of turbocharged flat four available for the new Boxster, both developed from the new turbocharged flat six engine (codenamed 9A2B6T) created for the recently facelifted 991-generation 911.

In essence, Porsche has got rid of two cylinders in order to create the new turbocharged flat four (codenamed 9A2B4T). The base 2.0-litre boxer unit has a single turbo and is expected to make around 295bhp and 258lb ft. This engine’s bore and stroke dimensions are 91mm and 76.4mm respectively and these, as well as the cylinder pitch, are the same as the 911’s.

The Boxster S will have a larger bore and stroke than the base model, increasing engine capacity to 2.4 or 2.5 litres and making around 355bhp and 295lb ft. The rumour is that a turbocharger with Porsche’s Variable Turbine Geometry (VTG), as used by the 911 Turbo, will be fitted to this engine.

Matthias Hofstetter, the man in charge of powertrain development for the Boxster and Cayman, proudly explains how they could successfully fit a turbocharger into a space as the tight as the Boxster’s engine bay. “Engine packaging was one of the most difficult parts of development,” he says. “The two front cylinders were replaced with a turbo unit.

The intercooler layout was also a pretty tough task. Facing forward, air coming from the left side air intake flows into a water-cooled intercooler. It reduces the turbocharged air from 160deg C to 50deg C. We call this a Lower Temperature Intercooler System.” 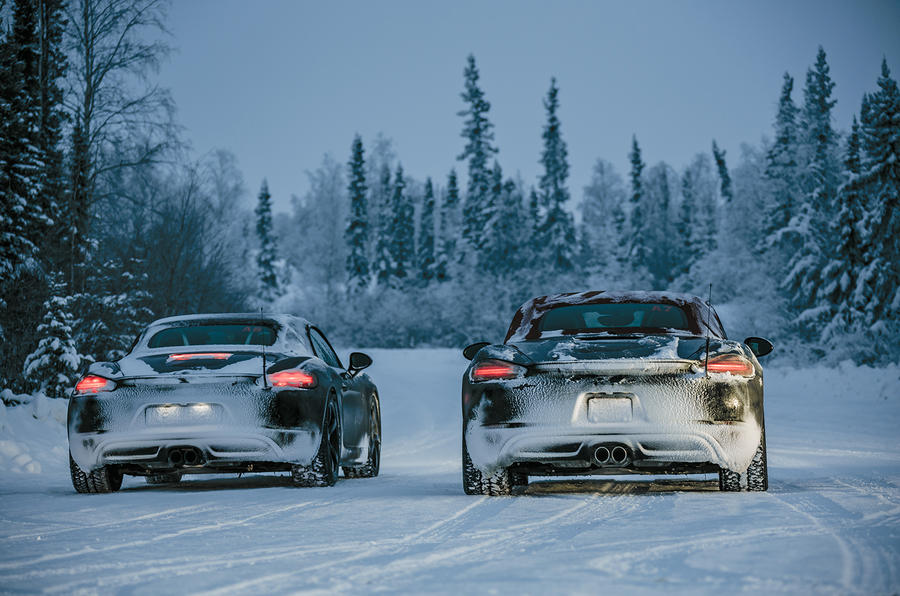 Another challenge was vibration control. “A  flat four is an inherently well-balanced engine,” says Hofstetter. “To achieve the smoothness  like a six-cylinder engine, four active engine mounts were installed. We believe this is a very effective solution. Fuel efficiency, which is the  most important factor of the downsizing, is improved by one litre per 100km [around 5mpg] compared to the current model.”

His confidence as an engineer, and relief after such an accomplishment, is palpable, and the figures are borne out during our test. From the passenger seat, a look at the rev counter reveals that the 2.0-litre flat four is running stress-free  to 7400rpm, right below the redline.

As a result of the additional parts needed for the turbo system, the overall weight of the base Boxster has increased from 1315kg to 1400kg. Top speed is nonetheless more than 174mph and the 0-62mph sprint takes a claimed 5.5sec. The Boxster S hits 62mph in just 5.0sec.

Our first look at the car doesn’t reveal much in the way of exterior changes, but examine it more closely and you can see upgrades such as newly shaped wings, side panel air intakes and rear spoiler. Inside, the materials, feel and finish are improved to an astonishing degree. You’ll be able to order an optional 918 Spyder-style steering wheel, too. On cars equipped with a PDK dual-clutch automatic gearbox, there will also be a Sport Response button that primes the drivetrain for maximum response for about 20 seconds at a time. 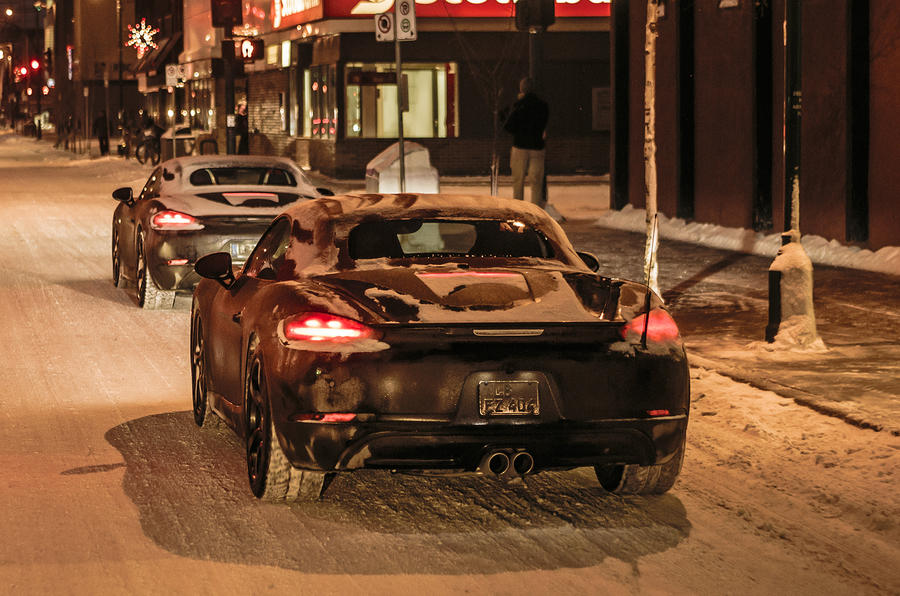 You don’t need to be in the driver’s seat to feel the power from the 2.0-litre turbocharged flat four. Performance – channelled by either the seven-speed PDK or a six-speed manual gearbox – is more than satisfying, and any loss of smoothness needn’t be a concern, with turbo lag kept to a minimum thanks to the small size of the turbocharger. In the more powerful Boxster S,  lag should be mitigated by the VTG system.

Neither should you be worried that the Boxster has lost its aural appeal, because a distinct, powerful baritone sound from the rear is quite audible. The four-cylinder engine’s vibrations are well tempered by the four active engine mounts, too.

Significant changes to the Boxster extend well beyond its technical make-up and deep into Porsche’s marketing strategy, with the model names officially changing to 718 Boxster and 718 Boxster S, an honorary title that references the legendary mid-engined racers based on the 550 roadster manufactured from 1953 to 1957.

Furthermore, it is expected that the Boxster will have a higher price than the next-generation Cayman coupé. Previously, the Boxster was priced below the Cayman. Porsche will need to give the Boxster distinct advantages over the Cayman, including superior performance, to justify the repositioning, and it will be interesting to see  how the market reacts.

The 718 Boxster’s price and other details will be officially announced at the end of  January, with the first cars expected in the UK towards the end of April, soon after its debut at the Geneva show.

Can't help but feel it should have a 6 cylinder engine in its price range, a sub £30k car would be ok with a 4 cylinder .you will be saying that a three or two cylinder will be available in a few years time.
spiceballs 17 December 2015

I'm sorry, but absolutely no mention of how many wash programmes there are or whether the clothes came out whiter. Yes, I know it seems to have a fairly fast spin speed, but again, no mention of how quiet/noisy the spin dry cycle was? Is it hot fill, is it cold fill? This test simply doesn't go into any relevant detail at all. Is there a child safety lock fitted on the door? Was it easy to get the washing powder into the draw without contaminating the softener compartment. No mention whatsoever.
madmac 16 December 2015

I'm sorry, but absolutely no mention of how many wash programmes there are or whether the clothes came out whiter. Yes, I know it seems to have a fairly fast spin speed, but again, no mention of how quiet/noisy the spin dry cycle was? Is it hot fill, is it cold fill? This test simply doesn't go into any relevant detail at all. Is there a child safety lock fitted on the door? Was it easy to get the washing powder into the draw without contaminating the softener compartment. No mention whatsoever.

WTF are you on?