BACK TO ALL NEWS
Currently reading: Renault to rebrand F1 team as Alpine for 2021
UP NEXT
New 2023 Audi A4 Avant undergoes tests in the Alps

Renault to rebrand F1 team as Alpine for 2021

The Renault F1 team will be rebranded as Alpine F1 for next season, as part of a major push for the performance brand.

The French manufacturer's F1 outfit, which is run from Enstone, Oxfordshire, will carry the name and colours of the revived sports car maker. The 1.6-litre hybrid powertrains will remain branded as Renault E-Tech units, ensuring the car firm retains an identity in F1.

A promotional image released by Groupe Renault previews a car finished predominantly in Alpine's signature blue, with the rear in red and white, likely to reflect the French flag.

Double world champion Fernando Alonso has already signed to race for the team next year alongside French youngster Esteban Ocon. 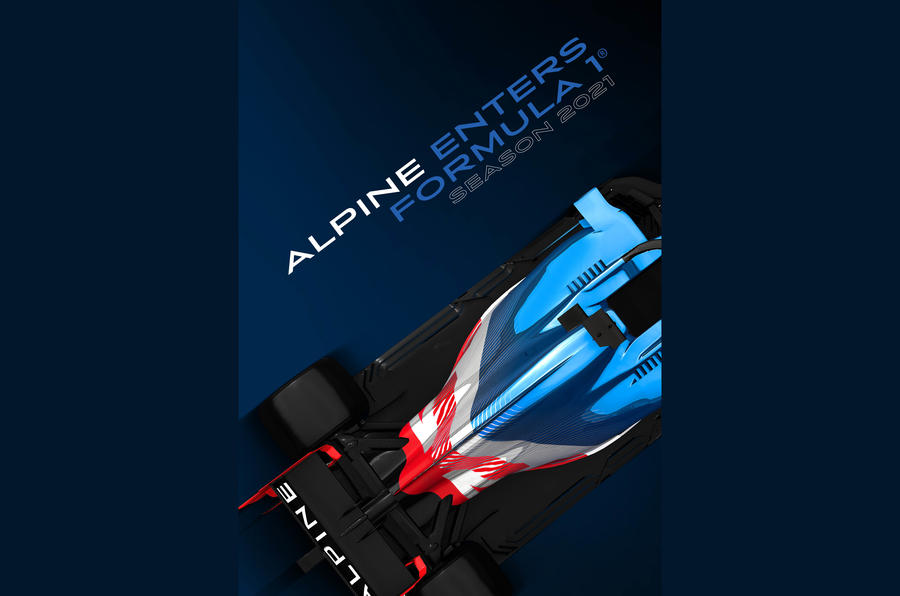 New Groupe Renault boss Luca de Meo said: "By introducing Alpine, a symbol of French excellence, to the most prestigious of the world's automotive disciplines, we are continuing the adventure of manufacturers in a renewed sport. We are bringing a dream brand alongside the biggest names, for spectacular car races made and followed by enthusiasts."

The F1 team will continue to be headed by Cyril Abiteboul, who recently took responsibility for the full Alpine brand as part of a major Groupe Renault reorganisation. He said that Alpine "brings a new meaning, new values and colours to the paddock", adding that the team would benefit from planned new technical rules and a cost cap being introduced for 2022.

He added: "Alpine has its place in Formula 1 and can challenge for victory."

Team bosses recently signed up to Formula 1's new Concorde Agreement, the document governing the sport that kicks in from 2022, tying Groupe Renault to remaining in the category. There had been some speculation Renault was considering the future of the team it owned, given its continuing struggles to match the likes of Mercedes-AMG and Red Bull-Honda.

The decision to switch the team to Alpine will put the squad up against sports car brands such as Ferrari and Aston Martin in 2021. It's also a significant move for the Alpine brand, which has only produced one car – the highly rated A110 – since it was revived by Groupe Renault in 2013.

The future of Alpine has been up for debate for some time, with reports suggesting that the most likely approach is for it to become a performance figurehead for the group, with the introduction of hybrid and electric models.

Given the investment required to compete in F1, using the Alpine name suggests that de Meo has big plans for the brand. Keeping the power units branded as Renault also helps firm up the links between the sub-brand and its parent firm.

Renault originally entered F1 in 1977 and pioneered the use of turbocharged engines. The original works team left F1 after 1985, with the firm remaining as an engine supplier the following year. It returned as an engine supplier in 1989, running naturally aspirated V10 engines and achieved championship success with both Williams and Benetton. It eventually bought Benetton to run as a full works team for 2002.

The squad achieved back-to-back championships with Alonso in 2004 and 2005 but slipped down the order before he left, and Renault eventually sold the team in 2010 in the wake of the Crashgate scandal. It continued to supply engines, powering Sebastian Vettel and Red Bull to four consecutive titles from 2010 until 2013, but grew frustrated, believing it wasn't getting the credit it deserved for its success.

That prompted it to buy back the Enstone-based squad to run as a works team in 2016, although it has since struggled to match the top teams.

In 1967, Alpine built an A350 F1 car in response to a grant from the French government. The machine was tested, but plans to enter it in the 1968 French Grand Prix were eventually scrapped.

Alpine finished first, second and fourth in the 1971 Monte Carlo Rally with the original A110 and used the car to win the inaugural World Rally Championship for Manufacturers in 1973.

In the 1970s, Alpine and Gordini were merged to form Renault Sport for an attack on the 24 Hours of Le Mans, and it also built Formula 2 and Formula 3 chassis (although they weren't branded as Alpines, because they didn't run Renault engines).

When Renault revived the brand in 2013, it partnered with sports car squad Signatech to enter a Nissan-powered prototype in the LMP2 class of the European Le Mans Series. The squad has also regularly run in the division at Le Mans.

Renault's F1 boss on the 2020 season and title ambitions

Not certain what they think they will achieve by doing this as the name "Renault" has a giant rep in F1.

Hopefully this means an expansion of making cars as lightweight as possible, especially if they start making electric cars.

p.s. The website redesign is too bright! I don't want a dark mode, but I understand why others might when there are websites like this. It was a bad trend a few years ago, which most websites have now fixed.

Could this mean we'll be seeing special Alpine cars on the road like in the 80's?