BACK TO ALL NEWS
Currently reading: Life in the (very) fast lane of Top Fuel Dragsters
UP NEXT
True blue: Ford Sierra RS Cosworth vs Mustang Mach-E

Life in the (very) fast lane of Top Fuel Dragsters

A Top Fuel drag race is over in the time it takes to read the first half of this sentence, but plenty happens in that short space of time. Britain’s Liam Jones, who recently competed in the FIA European Finals at Santa Pod Raceway in his RF Motorsport-prepared car, takes us through the process.

Once the car has been warmed up – itself a process that needs to be carried out carefully due to the stresses soon to be exacted on the supercharged 8.1-litre V8 engine – the driver starts the burnout procedure. This involves accelerating part of the way up the strip to generate heat in the slick tyres, scrub off impurities and lay two sticky lines of rubber down on the track for maximum traction.

“My crew will push on the struts of the rear wing as I let off the brake and ease the clutch out ever so slightly. It gives the car a bit of momentum to prevent clutch wear and overheating,” says Jones.

The first part of the burnout area is sprayed with water in order to reduce friction between the tyre and the track surface, after which the driver will light up the tyres. The rear tyres on a Top Fuel dragster are 18.5in wide, giving a generous contact patch with the track. “We run them at about 7.5psi,” says Jones, although that pressure increases as the tyre generates heat.

Burnout completed, Jones reverses back to the start area. Top Fuel dragsters have only two gears: forward and reverse. “My crew chief directs me where to go,” says the Yorkshireman. “Strapped in the cockpit, I can’t see anything behind me, so he is my reversing camera.

Positioning for the run is crucial. “It is more important to get into the middle of the groove, which is where the majority of the cars have driven and most of the track preparation has taken place.”

Prior to competitive runs, the team walks the strip with a grip meter to find out where the best traction is. 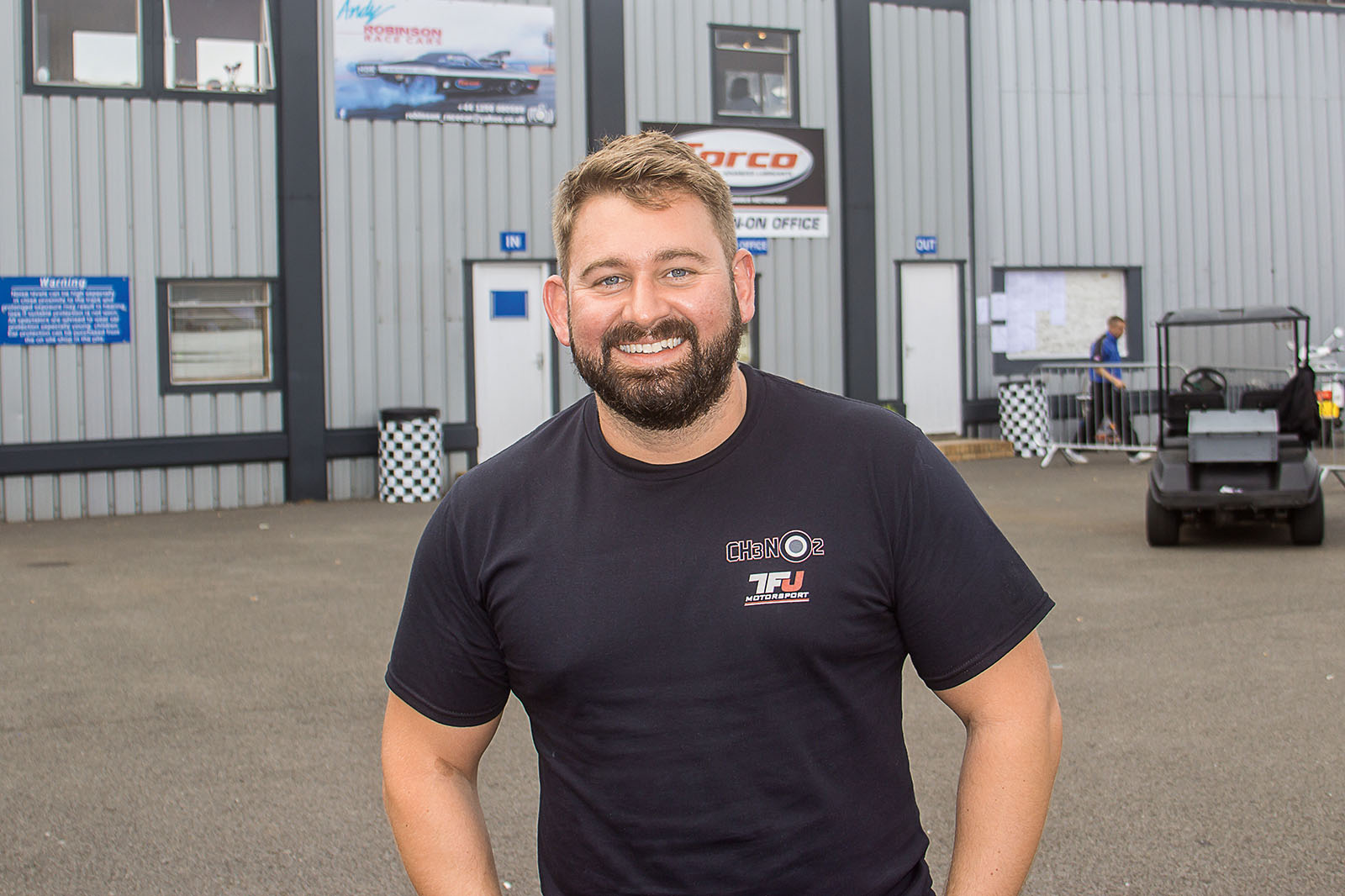 Jones reverses back behind the start line. “The crew will adjust the engine’s idling, make sure the fuel flow and revs are correct, give everything a final safety check, then I’ll get the go-ahead to edge forwards into the pre-stage area,” he says.

Drag strips use a series of timing beams connected to rows of start lights known as a ‘Christmas Tree’. When Jones enters the pre-stage area, it triggers the first light and indicates to his opponent and organisers that he is ready for his run.

“The car has a variable-flow fuel pump, so when I’m in pre-stage and the top yellow light on the Christmas Tree has come on, I put the pump on full, so it’s pouring fuel into the cylinders. The common phrase for this is to ‘go on the high side’.

“I let the clutch out,” he continues. “It’s a centrifugal clutch, much like a moped’s but on a grander scale, so you can’t stall. There’s no foot brake – it’s just a big hand-operated lever that brakes the rear axle.”

If Jones is racing a rival, he’ll wait in the pre-stage area until the other driver is also there. Then both competitors will inch forward into the stage area, ready for the start.

“You anchor on the brakes, get your foot ready on top of the throttle and when the lights go amber you plant your foot, let go of the brake, hold onto the steering wheel, and all hell breaks loose,” he says.

“By far the most important phase is the start,” says Jones. “It’s where you need the most traction.” Plenty can go wrong, such as a poor reaction, a clutch or engine issue, or the dreaded ‘tyre shake’ that destabilises the car, but if a driver makes a clean getaway, he’ll be north of 100mph in 0.8sec.

With almost 10,000bhp on tap, pre-programmed clutch and fuel flow systems adjust themselves during the run to optimise drive and engine power as the dragster heads towards 300mph.

As all this is going on, Jones is kept busy: “Steering inputs are very slight, but there are a lot of them. It’s surprising how quickly your brain can react. You’ve got complete clarity when you’re going down the track, but it is almost like your brain doesn’t fully process it until afterwards.”

The noise and force generated by a Top Fuel dragster can be physically painful for those outside of the car, but Jones says it isn’t so bad inside the cockpit.

“You’ve got a titanium heat shield behind you, the exhaust headers are facing backwards and you’re moving at a rate of knots, so it’s nowhere near as loud as when you are watching,” Jones says. “Even to drive, unless you’re getting tyre shake or spinning up, they are actually quite smooth and easy to handle.”

After the finish line, comes the task of decelerating from around 300mph, for which Top Fuel dragsters rely mainly on two parachutes. “When you deploy the parachutes after a good run, it’s probably the most aggressive part of the drive,” says Jones. “You go from pulling around 4-5g to minus 4-5g. It’s a massive transition. When the chutes deploy, you can drop about 150mph in two seconds. It can actually wind you.” Nevertheless, Jones will already be raring for his next run. “The only word to describe it is ‘intense’,” he says. “There is no feeling like it.”

0 to 100 in less than a second, that's a figure I've never been able to comprehend with these things. My bike will probably do it in about 6.5 - 7 seconds and that feels insanely quick.
Bob Cholmondeley 18 September 2016

0 to 100 in less than a second, that's a figure I've never been able to comprehend with these things. My bike will probably do it in about 6.5 - 7 seconds and that feels insanely quick.

Me too, it just seems extraordinary that two tyres can deliver that much shove, no matter how powerful the engine.