BACK TO ALL NEWS
Currently reading: How to go drag racing
UP NEXT
Gordon Murray T50 is V12-powered McLaren F1 successor

"Don’t yank the wheel. Tell me how that works out for you if you do…” The message from Doug Foley, former drag racer turned drag racing tutor, is plain: if I make too much of an impression on the steering wheel of the dragster I’ll shortly be driving down the Las Vegas Motor Speedway strip, the ambulance crew at the end of it should cancel any dinner plans.

I’m in Vegas to be taught by Foley and his team how to be a drag racer, keeping that wheel straight and all. It’s an experience he’s offered through his company, Pure Speed, at the speedway since 1999 after an eight-year professional career as a top-fuel drag racer ended.

Foley’s dragsters are entry-level cars in the drag racing fraternity but look more than grown-up enough when I clap eyes on one under the speedway lights for the first time. Well, after my eyes have stopped watering from the fuel being burned off from the big boys in the top-fuel and funny car dragsters doing practice runs, some breaking the 4.0sec barrier for the quarter mile at speeds of more than 320mph. My eyes might recover, but my ears are still ringing. Thank heavens for the ear defenders. Anyway, Foley’s more ‘sedate’ cars are purpose-built to a 4.5-metre-long wheelbase specification, power coming from a water-cooled 500bhp 6.6-litre V8 that revs to 7500rpm. The car weighs just 680kg and should be capable of the quarter-mile run in around 10.0sec at a speed of 130mph across the line. That’s more than fast enough for me.

There’s remarkably little science involved in driving one. There are two pedals: an accelerator for your right foot and for your left a brake, which I’m advised against using because it will unsettle the car. Hmmm.

The transmission is a self-shifting electronic two-speed unit. So when you’re on the start line, you floor it and go. And don’t touch the steering wheel. “Just assume it will go straight,” says Foley. “Don’t anticipate something that’s not happening.” 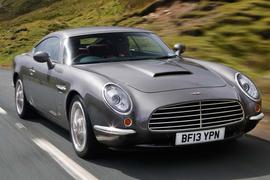 Sounds simple enough. Before it’s my turn, I hop in for a passenger ride with a chap mysteriously called ‘Dale Superstar’ to be a fly on the wall in a slightly larger and more powerful two-seat version of one of Foley’s dragsters. First up is the so-called ‘burnout’ as you approach the line. Water is sprayed on the track and you slowly drive through to get the massive 32in slick rear tyres coated. Then you floor the throttle for two seconds, the tyres first spinning as if driving on ice before they start smoking. Just as they bite and get traction, you back off and approach the line.

What I feel next, as Mr Superstar reacts to the lights, is something best described using keys on the keyboard that aren’t between A and Z. Things like ‘&%£*!*’ and ‘!*&^^@’. What that roughly translates to is that it’s rather quick off the line.

The reason the tyres, now hot, can instantly grip is because the whole drag strip is coated in glue. The hot tyres melt the glue and make it sticky, so they grip. The car bites into the track and you can actually feel the torque pushing you forwards faster than your body and mind can comprehend.

My body catches up with me again back in the pits, then it’s my turn. Being strapped into a dragster is a more intimidating experience than in a regular racing car. There are high sides and no mirrors, so you’ve got no idea what’s going on around you with reduced peripheral vision.

I’m called forward to perform a large U-turn and approach the puddle to coat my tyres ahead of the burnout, edging it forward on the creep mode in the transmission. So by the time the tyres are wet and the burnout is about to start, I still haven’t touched the throttle. The first time will be full throttle in the burnout.

This goes surprisingly well. The wheels spin, of course, but the instant you feel them bite, instinct kicks in and you back off anyway. That brief bite is still enough to throw me back against the seat, though.

And so to the start line. I creep forward to trigger the start sequence, and when the third yellow light comes on, it’s time to floor it. Phwoar. Normally when you floor it in a road car, no matter how fast it is, you still feel like you are driving it. This is the first thing I’ve driven, on first impressions at least, that feels like it is driving me… I back off after 330ft before returning for run two, which goes to 660ft. I feel in control this time, knowing what to expect, driving the car again. The apprehension is replaced by a huge smile.

To the third and final run, the full quarter of a mile. Foley gave a polite warning earlier about this run: “After you’re past the grandstand on the full run, the wind comes in. If you’ve not done it before, it can scare the hell out of you.” Only he didn’t quite say ‘hell’.

He’s not wrong. It’s another good start, and then I go past that grandstand. At this point the car feels light. It’s moving around a lot and I have to touch the wheel slightly. Touch, luckily, not yank. It’s unnerving, and I think to myself that I might have backed off the throttle ever so slightly.

The dragster was one of the most exhilarating things I’ve driven, but it was also at times the scariest. For once, I’m glad to go back to the day job.

4 January 2016
if an outsider is able to run competitive times on the third race after some tutoring, what exactly is the added value brought by the driver? Why is there a driver in the first place? Surely a robot could slam the throttle and not touch the steering wheel just as well.

4 January 2016
....really envy you that Mark! Hell of an experience.
I try to get to the Pod once a year...usually the European Finals, to get my 'fix' of Nitro methanol!
I don't think Amanitin is a Drag racing fan...otherwise he would know that the level of ability/expertise goes up exponentially for every half second quicker than a 10 second pass. The guys running 4's to 6's have almost superhuman abilities (not to mention big cojones), as the car writhes all over the place when you have 8,000 HP under your foot.
Best not to underestimate the skill needed for this.