BACK TO ALL NEWS
Currently reading: Toyota unveils new Mazda 2-based Yaris hatchback for US
UP NEXT
Fisker goes radical with Pear EV SUV

Toyota unveils new Mazda 2-based Yaris hatchback for US

2020 Yaris hatchback will be built in Mexico for the US only; features more equipment as standard
Open gallery
Close

Toyota has launched a new Toyota Yaris hatchback, based on the Mazda 2, for the US market at the New York motor show.

The 2020 US Yaris will be built for Toyota by Mazda’s Mexican arm and is mechanically unrelated to the Yaris models sold elsewhere.

The relationship with Mazda’s supermini can be seen in the model's basic shape, although it has a heavily reworked front fascia featuring the "hunkered-down, bulldog-like stance" that has become integral to Toyota’s global design language. 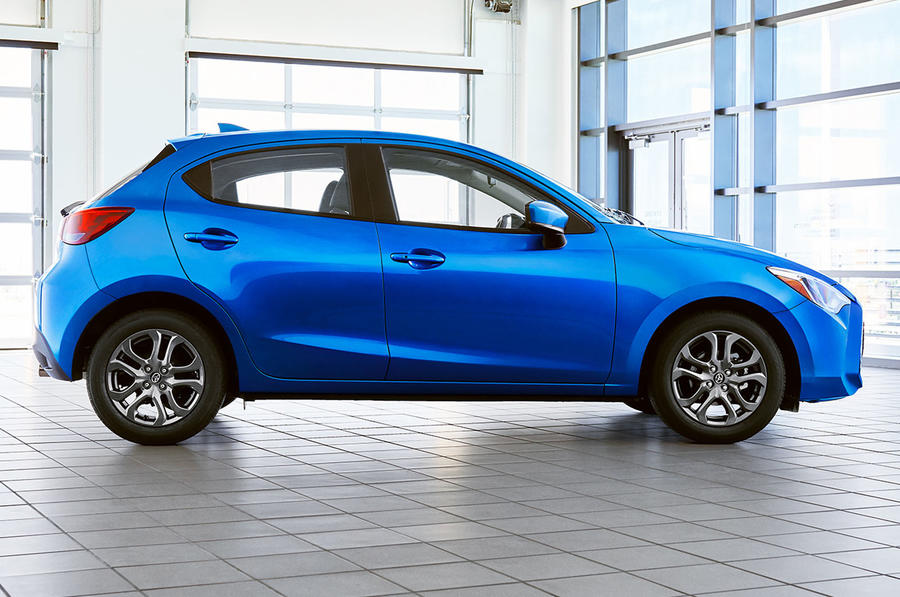 Toyota claims that the new Yaris hatchback is designed with urban dwellers in mind and says it has 450 litres of boot space.

As with the 2-based Yaris saloon that was introduced to the US and Canada in 2015, it offers only a 106bhp 1.5-litre four-cylinder petrol engine and a six-speed automatic gearbox. A new Sport driving mode enhances acceleration response.

The platform sharing agreement between the two Japanese manufacturers stretches back to 2015, when Mazda began production of restyled variants of the 2: the Toyota Yaris for Mexico and the Scion iA for the US.

In Canada, the 2-based Yaris saloon will remain on sale alongside the Yaris hatchback that's sold in Europe, rather than the new Mazda-built model.

Toyota and Mazda have worked together on a number of ventures in recent years, including the creation in 2017 of a joint venture company to develop electric cars.

Really cannot understand why Mazda “has jumped” in to bed with Toyota.Mazda has ALWAYS had far better vehicles than Toyota.Toyota is the biggest selling marque in Australia,but hell,they are as boring as hell!Yaris?Complete rubbish in its current form.

Just helped a friend of mine buy a mazda 2 after looking through all of the similarly priced cars in the segment.

The mazda 2 has a vastly better interior quality and a hearty little 1.5L naturally aspirated 115hp engine that's also found on the MX-5, where it also takes its decent manual gearbox from. 0-60 is 8.9s which really isn't too bad.

The exterior styling is subjective but inside there's leather, soft touch areas all over and a really good perceived quality compared to the bleak interiors of cars like the suzuki swift, and pretty much every car you could compare it to.

Buying the top of the range model you get nearly every optional extra you could ever ask for, but for less than a mid range polo or even micra. Pricing was very competitive too.

You all must be confused from seeing horsepower and 0-60 figures from sports cars on here. The mazda 2 blows pretty much any 'non-hot hatch' car out of the park.

I agree, the 2 is a great car, I like the yaris as well but see little merit in this US market yaris as it even looks more or less identical to the 2, unless the 2 isn't available in the same market then maybe this yaris makes a bit of sense, but if they're competing it seems daft as they're too similar. In my opinion. My wife has a mii and I don't feel that there is enough to differentiate it from an up, though it does, in my opinion look less like white goods, but having three cars the same almost seems pointless.

dear xxxx, also to me from

dear xxxx, also to me from the photo the car does not give the impression of the car pleasant to judge, I agree with what seems to be unhappy