Toyota has released new details of its new RAV4 Plug-in Hybrid, which will arrive in the UK with a 302bhp powertrain capable of more than 38 miles of electric-only running.

The fifth-generation SUV was launched in 2018, but it was initially offered in the UK with just one powertrain option: a 2.5-litre petrol-electric hybrid producing 215bhp in front-wheel-drive form and 219bhp in four-wheel-drive models. Toyota says the new machine is the most powerful RAV4 – and the quickest alternatively fuelled Toyota – ever.

The new plug-in variant features four-wheel drive as standard and uses the same 173bhp 2.5-litre petrol engine as the regular hybrid. That engine is mated to a larger underfloor battery and more powerful electric motor – although Toyota has yet to specify details of these. The new battery is a high-capacity lithium ion unit, with the powertrain featuring a boost converter on the hybrid’s power control unit. 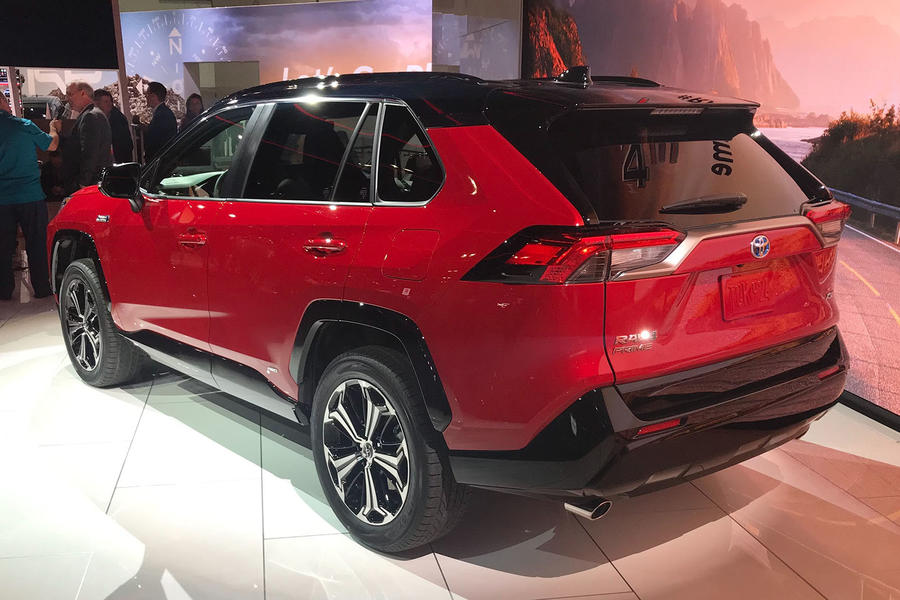 Toyota says the system produces 302bhp in total, emits just 29g/km of CO2 (according to 'WLTP-standard data') and can propel the RAV4 from 0-62mph in 6.2sec. The electric motor is capable of running at speeds of up to 84mph with no intervention from the engine.

The new model will be offered in the UK with a range of driver assistance features, including a colour head-up display for the first time. Additional features and options include 19in alloy wheels, heated front and rear seats, two-tone paint schemes and smartphone integration.

The RAV4 Plug-in Hybrid is due to go on sale in the second half of 2020. A UK release date and pricing details have not been confirmed yet, although it is likely that it will cost more than the current model, which starts from £29,635 in front-drive form.

Long-standing SUV enters a new generation - can all-round improvements turn it into a Nissan Qashqai rival?

Packaging is clever on the

Packaging is clever on the non PHEV one as it is, with a big boot and spare wheel onboard, plenty of foot room front and back even with the AWD rear motor axle. Where a bigger battery will go who knows!

Price is going to be the issue, its pretty pricey as it is (but does come with a hell of a lot of stuff fitted that would be an expensive day out on some other brands option lists)

Every Toyota with keyless entry & keyless go that has been tested seems to get a poor security review whereby a thief, with a relay device, can open and drive the vehicle away without the key. Has this been fixed by Toyota yet?

Keyless entry was never a

20 November 2019
Keyless entry was never a major issue and could easily be switched on and off by the driver, but this will be advanced for 2020 with a new measure de-activating the key when it is sensed as being stationary (after circa 5 minutes). So when it is in your house, the usual signal being emitted will stop thereby no longer possible to relay to a dummy key.

The 0-62mph figure of 6.2 secs is presumably only attainable when the batteries are fully charged. Given the small battery size and limited range, will maximum performance only be available at certain times?