BACK TO ALL NEWS
Currently reading: Volkswagen declines to pay £1m DfT post-dieselgate bill
UP NEXT
Analysis: winners and losers in the automotive CO2 race

Volkswagen has refused to pay £1 million to the Department for Transport (DfT) in order to upgrade emissions testing procedures following the dieselgate emissions scandal.

According to Autocar's sister title The ENDS Report, the money is needed to fund a market surveillance system that will be used to monitor the emissions of production vehicles to prevent a similar case happening again.

Is the end of the petrol and diesel car in sight? The government plans to ban sales by 2040

Volkswagen has argued that the monitoring process will not be directly related to dieselgate, because it will involve products from all manufacturers, so it can't be expected to foot the bill. The brand has already paid £1.1m towards funding the cost of retesting of existing cars.

“The only formal request for payment made by the UK government in respect of the NOx emissions issue came from the Department for Transport,” said a VW spokesman in an official response. “Initially, the Department requested that £2.1m be paid, composed of £1.1m in fees for historic testing and a further £1m for funding the work of a Market Surveillance Unit.

“Volkswagen paid the £1.1m during late 2016 and explained in November 2016 to the Department that there was no legal basis for the payment of the £1m to fund the Market Surveillance Unit’s future activities, which are unrelated to the NOx emissions issue affecting Volkswagen vehicles.”

The DfT hasn’t responded to VW following its refusal to pay, and the car maker has taken that as a form of acceptance. However, transport minister John Hayes has written to the brand twice in the past two months to urge the company to reimburse the department for the programme. It still refuses to do so.

VW has since reiterated its stance. “Volkswagen’s reasonable view is that the Department for Transport accepted that we had repaid the full amount incurred as a result of additional testing of Volkswagen vehicles,” it said in a statement.

The UK government has so far not taken action against VW, although the Mayor of London has called for compensation. VW maintains that it did not breach EU law, but in the US it is has been criminally prosecuted with a £12 billion settlement.

An average of 20,000 affected VW models are being issued a 'fix' in Britain per week. The brand expects to have recitified all cars by autumn. 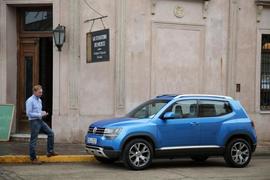 The Taigun is Volkswagen's answer to the Ford EcoSport, but does it have what it takes to compete in the emerging compact SUV sector?

There's no reason on Earth why VW should pay for a new testing programme. If the government really has asked for the payment it was a stupid request to make. What are they going to do next? Demand Fiat cough up for new motorways? Send BMW the bill for traffic lights and roundabouts? It'd make as much sense.
Tony Short 11 April 2017

VW has already paid £1.1m towards funding the cost of retesting of existing cars. What on earth did the DfT do that could possibly cost that much? All the equipment required plus the personnel to operate it already exist. How could the testing cost more than a few thousand pounds? My guess - it didn't; the government is throwing it's weight around in an attempt to bully VW into giving them money.
pauld101 11 April 2017