BACK TO ALL NEWS
Currently reading: Pioneering in-wheel electric motor tech set to transform EVs this year
UP NEXT
New 2022 Polestar 3 officially previewed as launch nears

A new in-wheel electric motor designed to make it easier and quicker for manufacturers to develop EVs is due to enter production later this year.

The weight-saving technology, called the Protean Drive, has been under development by Farnham-based Protean Electric for the past eight years.

“There are a number of different applications for it,” explained Protean’s Gabriel Donaldson. “It can be used for two-wheel-drive EVs, to hybridise an existing vehicle or to convert a two-wheel-drive vehicle to four-wheel drive.”

The Protean Drive is a completely self-contained ‘smart actuator’ that includes a permanent magnet and synchronous electric motor, as well as the electronics needed to make it work. Each motor produces 81kW (109bhp) and 922lb ft, so a two-wheel-drive electric vehicle could conceivably produce peak power and torque of 160kW (214bhp) and 1844lb ft.

Using self-contained wheel motors such as the Protean Drive eliminate transmissions and driveshafts and free up space in the centre of the car between the driven wheels. Cabling is minimised – two cables supplying power and another smaller one used by the main vehicle computer to control the motor. 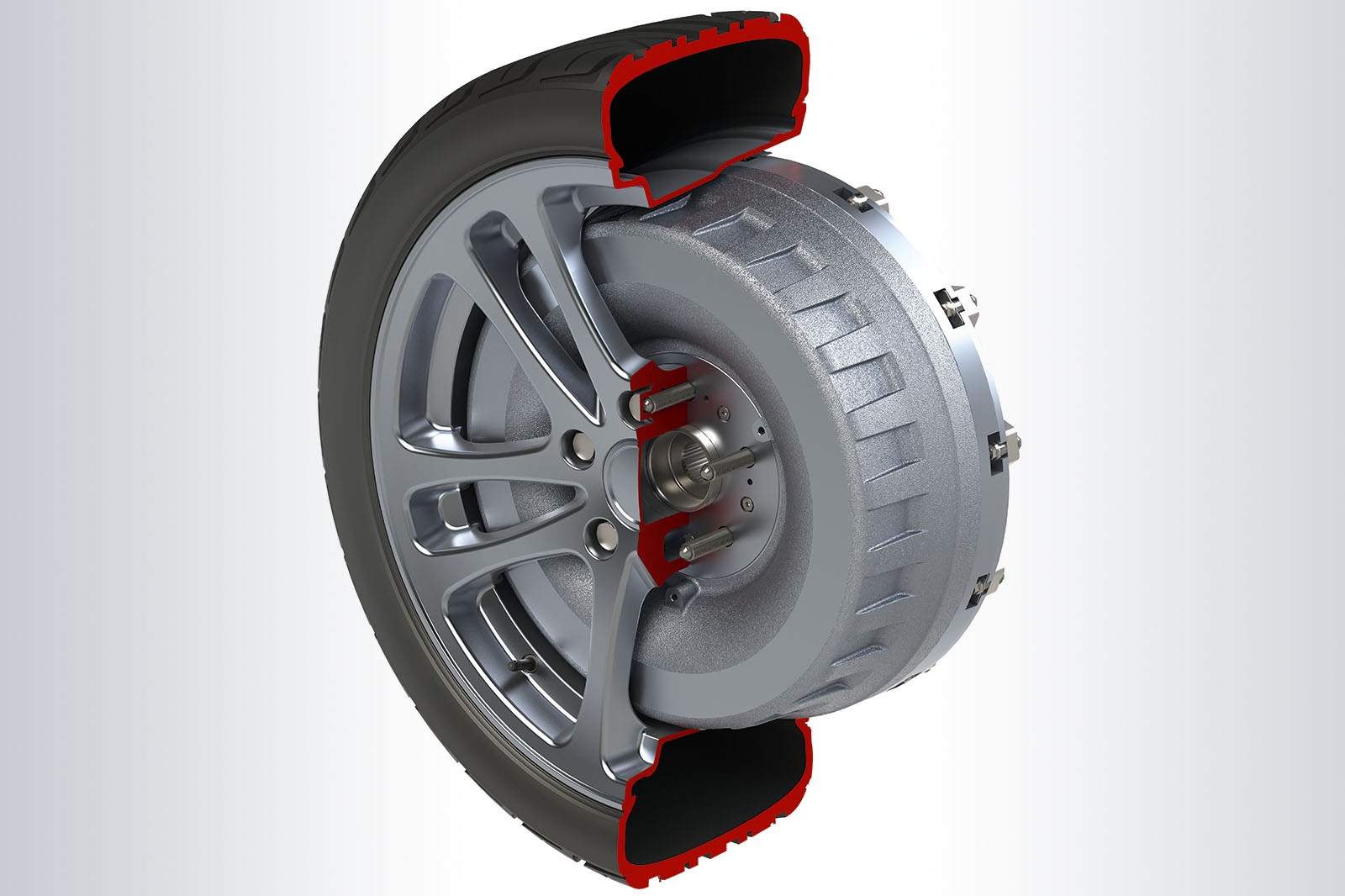 Donaldson says that, at 72kg, a pair of the motors weighs 30kg less than the electric drivetrain of a BMW i3 (102kg). However, the wheel motors still weigh more than a conventional wheel.

With that in mind, the Protean Drives were fitted to a Volkswagen Golf, the suspension of which was tuned by an independent vehicle dynamics expert. According to Donaldson, the additional unsprung weight was managed successfully and the test car was made to handle as well as a standard VW Golf GTE.

Eliminating transmission reduces friction losses by 6-8% compared with a conventional two-wheel electric drive system. The extra efficiency is a benefit during both acceleration and deceleration, so more energy is recovered during regenerative braking.

The Protean Drive can be produced to fit wheel sizes from 14in to more than 20in. It is currently in pre-production and will be built in China, initially at the rate of five to ten units a week.

Although there are significant packaging and efficiency benefits, the technology is more expensive than a conventional electric drivetrain and work is continuing to make it more price-competitive. “Although there are commercial benefits in using it,” says Donaldson, “nobody will pay more for it.” A Chinese vehicle manufacturer will be the first to adopt the technology this year.

What is an in-wheel motor and how does it work?

Like many EV motors, the Protean Drive is a permanent magnet-synchronous unit running on alternating current (AC), like a household appliance.

Sitting between an AC motor and the direct current (DC) battery is an inverter that converts DC to AC to power the motor. During regenerative braking, the inverter converts the AC generated by the motor to charge the battery.

Motors are usually separate and the vehicle manufacturer has to source a suitable inverter. The Protean Drive incorporates an inverter so can be used by an EV manufacturer on a ‘plug- and-play’ basis.

Protean Electric describes the new in-wheel design as an “inside out” motor.

Traditionally, permanent magnets are mounted on a rotating central spindle called a rotor. This is surrounded by stationary electrical windings called the stator.

In the Protean Drive, the rotor is on the outside and the stator on the inside. The motor drives the wheel directly and doesn’t require major modifications to the vehicle. Protean describes it as the “closest the auto industry may ever get to a bolt-on electric drive system”.

A little late to the party?

in-wheel.com
For all of you claiming that additional 35 kg is no go, that is not true, because those 35 kg are not rotating around the axis, so it doesn't matter that much where they are.It is the same as if you would split ICE's mass and put two halves on the farmost left and right sides of the car.
zgubar 5 January 2018

For all of you claiming that additional 35 kg is no go, that is not true, because those 35 kg are not rotating around the axis, so it doesn't matter that much where they are.It is the same as if you would split ICE's mass and put two halves on the farmost left and right sides of the car.

tnx for the info!

tnx for the info!