BACK TO ALL NEWS
Currently reading: Murray close to finalising T25 deal
UP NEXT
BMW reveals quad-motor M EV prototype

Potential manufacturers are bidding for Murray city car contract, with a decision due by June
Close

Gordon Murray Design is close to finalising a deal that will allow his revolutionary T25 and T27 city cars to enter production.

The legendary designer told Autocar that advanced talks had taken place with three potential suitors over a licence to build the cars, and he hoped a deal could be sealed by June.

The three interested parties are competing for a licence to produce the T25 and T27 using Murray’s iStream manufacturing process. Its efficiency, investment and space savings will allow cars to be made for much less than existing or proposed city cars. Both would be built on the same production line.

One of the groups is a start-up UK-based consortium, another is an existing European manufacturer and the third is an overseas-based start-up consortium. Once an iStream licence is granted to one of the companies to build the petrol-powered T25 and its all-electric T27 sibling, no other licences would be granted.

Murray confirmed he is working on six other projects that could be built using the iStream process, ranging from two seats to 13. “These are all different types of vehicles with different bodystyles and powertrains,” he said.

“The T25 was built by us to showcase the iStream technology, whereas the other six projects have all been people approaching us for an iStream licence to build a certain type of vehicle.

“The T25 and T27 have been byproducts of demonstrating the manufacturing process, so it’s great that there is so much interest in them. We know we really need to get these manufactured now, though.”

Download the Car Pics app for your iPad now

I doubt if Murray's pocket car will pass vehicle safety regulations in the U.S. There are other ways for 'squeezing in' three passengers into a car.  By making a car sleek rather than short, you end up with a far safer platform, as demonstrated underneath. Bonusses are: an offset passenger layout with ample space for all three and enough impact margin on all sides, great comfort because of the long wheelbase and a superior low drag outer shape. Don't forget that a hatched back creates a low pressure area trailing the rear that will literally cause drag. More info: newisetta.com 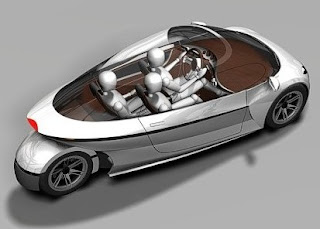 Los Angeles wrote:
Unless you buy a classic BMW Bubble car or Messerschmitt - closer to the T25 than anything else - post war frugal classics that cost fortunes these days

The stratospheric values of cars such as this is surely testament to the existence of a latent group of followers for cars that are as compact and minimalist as possible. I certainly count myself amongst them - I'd love a Messerschmitt, Isetta or a Trojan (or even a Peel!) but they are silly money and out of my reach for now!

Great news about the T25 (that I missed when it was current) - hope to hear of more progress soon.

metanoid android wrote:
I believe MIT are working on one called the "city car".

That I know about, not Riversimple. I shall scour Google for information! And thank you for your engrossing thoughts on new-age city transportation.

metanoid android wrote:
It is disappointing that BMW have, to date, not made a true mini.

As one of BMW's pumped up, jacked up, racked up, "Minis" overtook me, my wife ruefully uttered, "Mini? That's as big as a Range Rover!"
View all comments (105)