BACK TO ALL NEWS
Currently reading: Mercedes-Benz R-class axed in the UK
UP NEXT
Volkswagen Group facing EU fine for missing 2020 CO2 target

Mercedes-Benz R-class axed in the UK

The Mercedes-Benz R-class has been axed in the UK.

Poor sales of the MPV are believed to be responsible for its demise. As more motorists look to the booming SUV and crossover markets to fill their people-moving needs, sales of the R-class have continued to suffer.

Originally intended to blend the space of an MPV, the all-wheel drive reassurance of a 4x4 and the practicality of an estate, the R-class found itself competing in a number of sectors.

Mercedes has tried to revamp the range in 2007, offering the option of rear-wheel drive and seven seats in an attempt to boost sales.  A facelift followed in 2010, with an entirely new front end and a re-worked interior, plus changes to the car's 265bhp R350 CDI 4Matic engine to offer lower emissions.

A Mercedes spokesman said that while the R-class will no longer be available in this country, it will continue to be sold into Chinese markets. 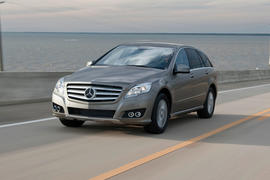 My brother had one and said

My brother had one and said it was one of the best cars he ever had except for the trade in value when he got his E class estate.

Probably the ONLY Mercedes I

Probably the ONLY Mercedes I would have considered buying for myself . . . with the “crossover” height-visibility-ease of access . . . built for long distance, transcontinental, journeys . . . 4x4 AWD to tow a horsebox off a field . . . and, enough “Captains chairs” for the whole family.

I would have bought one.

If it had been about 75% of its current size and had 7 proper seats (not 6.5). It has 4x4 but doesn't shout about it. The idea was good, the execution was poor.