BACK TO ALL NEWS
Currently reading: Chrysler to exit UK in 2017
UP NEXT
New 2021 BMW M5 CS sets records for pace and power

Chrysler will stop selling cars in the UK in 2017.

Speaking to Autocar, Fiat Chrysler Automobiles' deputy UK managing director Karl Howkins revealed that dealers were informed of the decision yesterday and the company would now be focusing on other brands in its range, including a revitalised Jeep.

The decision had been taken, according to Howkins, because the Chrysler product portfolio no longer appealed to UK car buyers and the CO2 emissions of the products that were offered were too high.

"The Jeep Renegade is more important to focus on as the volume is much higher," he said. "Plus there are more new Alfa and Fiat products coming that we need to focus on."

Chrysler has had a troubled few years in the UK, and sales have been dwindling, dropping below 2000 units last year. Back in 2012, sales stood at almost 3500 units.

Chrysler has traditionally been packaged alongside Jeep in UK dealerships, but some of its recent product offerings have been badge-engineered models sourced from Lancia, including the Ypsilon city car and Delta hatchback.

These models never resonated with UK buyers, and the Delta was withdrawn from sale in the UK last January, as revealed at the time by Autocar. At that time, however, Chrysler said it would continue its presence in the UK, but that decision has now been reversed.

It has had more limited success in the past with models such as the 300C saloon and Grand Voyager seven-seat MPV, but these models' fall in popularity has coincided with the a market shift away from large saloons and MPVs and towards towards SUVs. 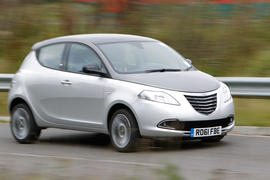 The Chrysler Ypsilon is a compact, economical five-door hatchback with cute looks and lots of equipment

Bit of a mixed bag really - Maybe they should have streamlined the product range for the UK market.
centenary 17 March 2015

Plain ugly cars that were

Plain ugly cars that were uneconomical to run. Dont let the door bang you on the arse on the way out.
jonboy4969 17 March 2015

Fatboyfat above quite clearly has not seen the Jeep sales in the UK, last year they achieved record numbers and so far this year they are up on last year, with the Renegade and other new/refreshed models due, sales can and will only go one way, and thats up.

before you comment you should at least know what sales numbers are for a brand is thats you only argument.

Fatboyfat above quite clearly has not seen the Jeep sales in the UK, last year they achieved record numbers and so far this year they are up on last year, with the Renegade and other new/refreshed models due, sales can and will only go one way, and thats up.

before you comment you should at least know what sales numbers are for a brand is thats you only argument.

I am one of those that made that figure! I bought a new Grand Cherokee and it was my third Jeep. As you know so much about numbers whats the comparison between say 2005 and 2014? Jeep were in decline for so many years previous to the new models a plain YoY does not work.

I have experienced Jeeps customer service (if you can call it that) first hand and along with many others we have come away unimpressed!