BACK TO ALL NEWS
Currently reading: China topples Europe as world's largest car maker
UP NEXT
Volkswagen committed to 'entry-level' ID electric models

A booming Chinese market means the region is now the most prolific manufacturer in the world, with the EU pushed to second place
Share
Open gallery
Close
Share story

China’s rocketing passenger car making industry is now the world’s largest by a significant margin. Nearly 18 million cars were made in China last year, well ahead of the EU’s production total of 14.6m.

According to figures just released by the European Automobile Manufacturer’s Association (ACEA), while EU production remained almost flat between 2012 and 2013, China overtook the EU in 2012 and continued climbing throughout last year.

Collectively, the so-called BRIC group of countries (Brazil, Russia, India and China) now produces 39.6 per cent of the world’s cars, but China is responsible for making 27.6 per cent of them. India (4.8 per cent), Brazil (4.2 per cent) and Russia (2.9 per cent) are minnows by comparison.

In 2002, China’s fledgling car industry built around one million cars, but by 2006 China had matched the United States’ automotive output of just over four million cars.

While nearly every other car making nation saw a drop in production in the wake of the 2008 global credit crunch, China’s car industry enjoyed its most dramatic period of growth, rising up from just under seven million units in 2008 to just over 14m units by the end of 2010.

ACEA figures from 2012 revealed that 2.2m people across the EU are directly involved in the production of all types of motor vehicles, with a total of 12.7m employed across the entire supply chain. This accounts for 5.8 per cent of all people employed in the EU. 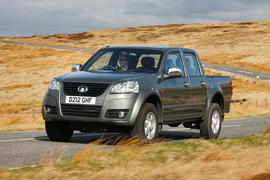 China is going from strength to strength, my worry is though that,when the period of growth there crashes,so will it effect the rest of the World economy?
rare 1 November 2014

Fills me with dread to be

Fills me with dread to be honest.
fadyady 1 November 2014

... many of the cars made in China are made by the European car makers. No denying though that the rate of growth of the Chinese car market is astronomical and shows no signs of letting up. I wonder how does it feel? Can be similar to mass migration. Somewhat like a town turning into a mega city within a short space of time. I bet half the people can't drive properly or aren't aware what that means.
Leslie Brook 2 November 2014

fadyady wrote:. I bet half

. I bet half the people can't drive properly or aren't aware what that means.

I suspect half the people in the UK can't drive properly either.