BACK TO ALL NEWS
Currently reading: Hillclimbing in a Seat Ibiza Cupra
UP NEXT
New 2026 Polestar 6 confirmed as 874bhp evolution of O2 concept

Hillclimbing in a Seat Ibiza Cupra

Thinking of trying out motorsport? There’s no better place to start than at a hillclimb, and Prescott is one of the UK's friendliest
Open gallery
Close

In Britain, one of the easiest – and certainly one of the most traditional – ways to start competing in motorsport is by doing hillclimbs.

With no need for a race licence and a huge variety of categories in which to compete, everyone from beginners to professionals can regularly take part, driving anything from completely standard road cars to F1-engined single-seaters.

The UK has more than 25 established hillclimb clubs scattered across the country, with some of the most popular including Shelsley Walsh, Harewood and Prescott. To get a flavour of this incredibly old but still very popular form of motorsport, we entered our Seat Ibiza Cupra long-termer into an autumn hillclimb at Prescott in Gloucestershire. 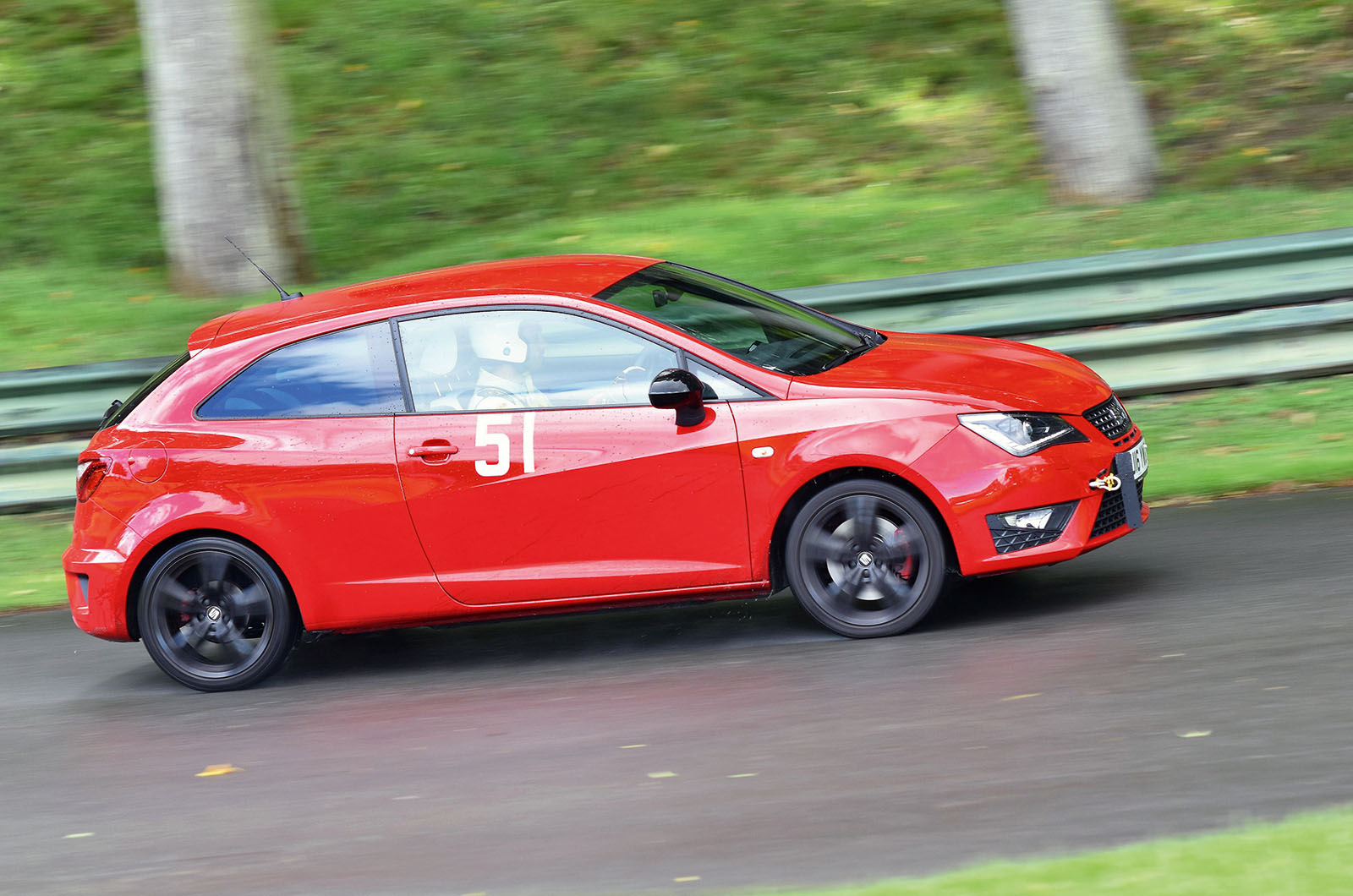 Because hillclimbs send cars up a hill one at a time, you don’t need to take a Motor Sports Association (MSA) race licence test in order to get started. Instead, you can purchase a non-race National B licence for £43, and in most cases you won’t even need to take a medical.

Hillclimb entries are by invite only, which means you have to be a member of a club that gets invited to events in order to enter. We joined the Bugatti Owners Club – don’t be fooled by its name, anyone can join – which is based at Prescott. Full membership is £76 for the year, and entry to a Prescott event costs £110.

If you really want to compete on a budget, there’s nothing stopping you from turning up in a few grands’ worth of used hatchback and heading up the hill. If a car is completely unmodified, scrutineers are only interested in ensuring the car is safe and roadworthy. 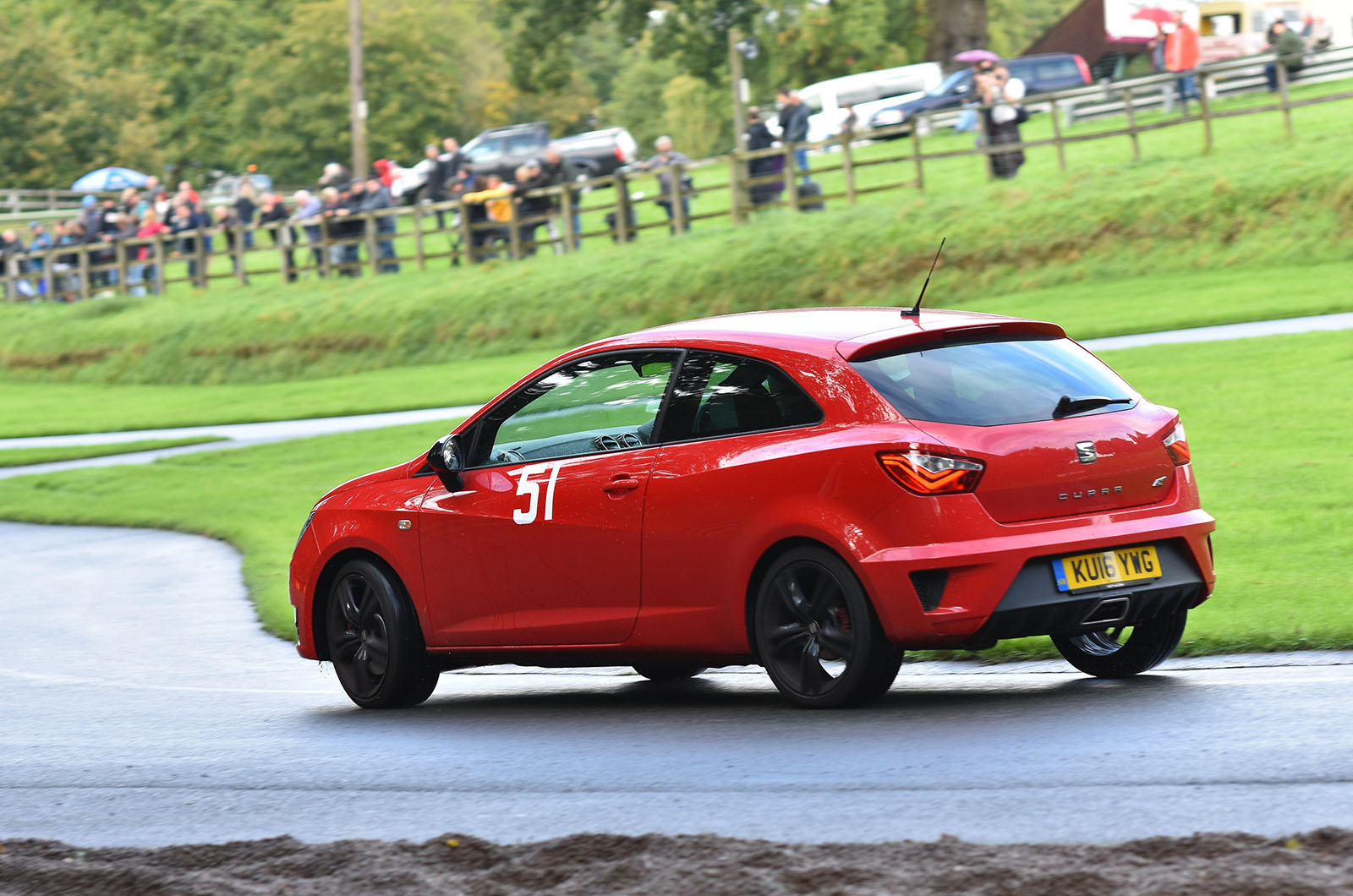 Generally, if a car has an MOT, it’s safe to compete, but hillclimb scrutineers are unsurprisingly more scrupulous than MOT station workers with their checks. Even our nearly new Seat is subjected to a thorough going-over that takes five minutes, illustrating just how important safety is. If your budget is bigger, you can modify your car, of course, but once you do, it may move across into a more serious category where the requirements for scrutineering become stricter.

Removing the rear seats, for example, means the car is classed as modified and therefore required to conform to specialist car rules. This can make roll cages, fire extinguishers and other additional safety features mandatory.

It’s not a legal requirement, but if you wanting to avoid potential bills following a shunt, you should insure your car for hillclimbing before taking part. It cost us £180 to insure our car for the day with a well-known motorsport insurer.

As demonstrated by Autocar’s Cupra, which arrives at Prescott completely unmodified apart from a set of race numbers, there’s a class for almost every car to compete in.

Top categories feature singleseat models with 700bhp-plus F1 powertrains, but below this there is a large number of classes that include GT racers, highly modified road machines and historic cars.

The Ibiza is the newest car to take to the hill on our day at Prescott. The oldest is a 1929 MG M-Type.

The difference in driver experience levels is similarly massive. Our Prescott run marks a hillclimb debut for yours truly, but at the business end of the paddock is reigning British hillclimb champion Alex Summers.

With just four runs up the hill, the first two of which are practice runs, a walk up the course in the morning is highly recommended, because there’s no time to build up slowly once in the car; every run has to be maximised. As the pros tell us later in the day, the key is finding that balance between ultimate pace and ensuring you don’t end up having an accident. 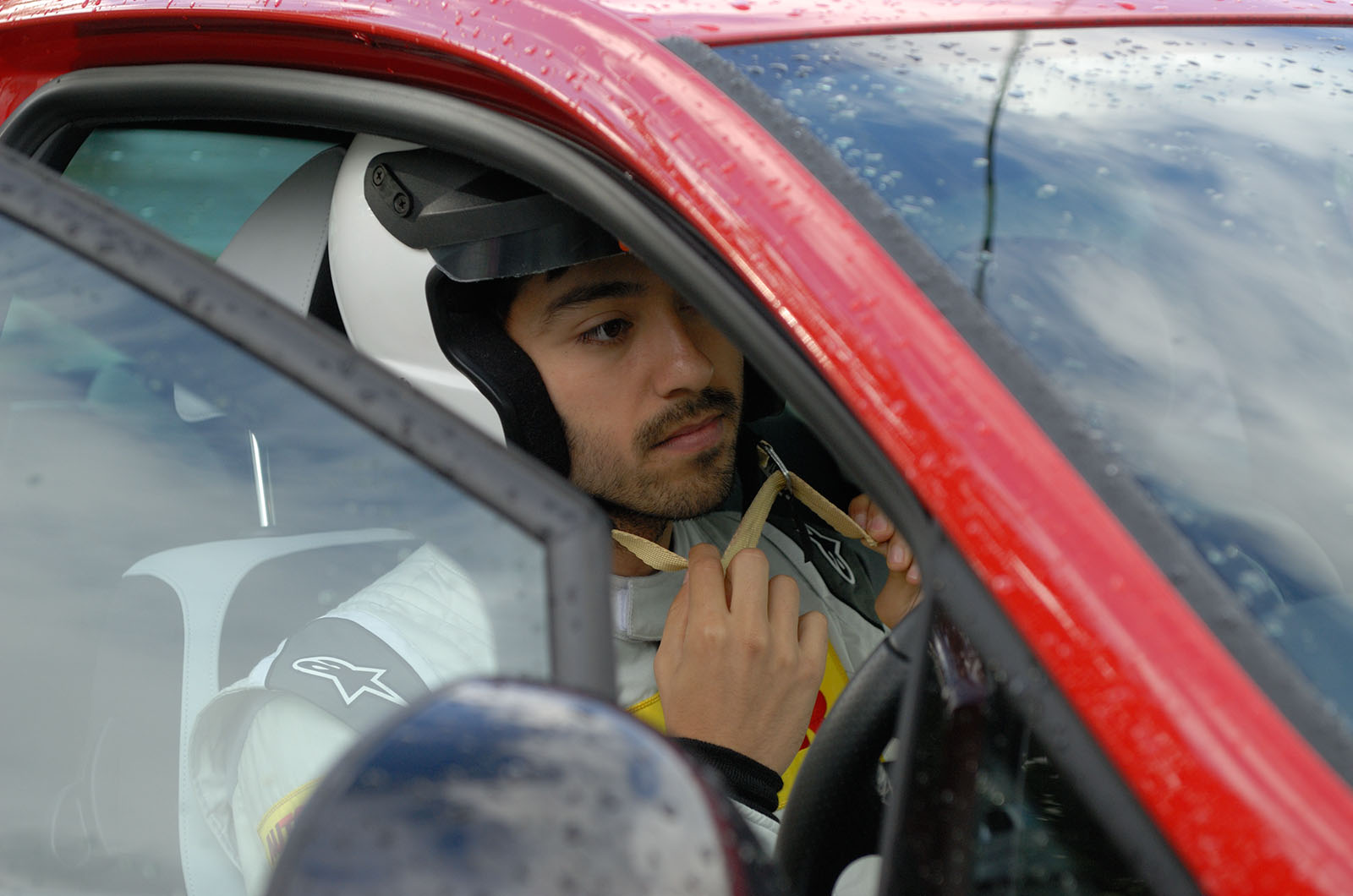 I don’t fancy experiencing the latter, so I approach the corners gingerly on my first run up Prescott’s technical course. Ahead of my second run I convince myself to push significantly harder, but such is the pressure of hillclimbing that fear kicks in once we’re moving and my time improves by less than a second.

Unlike conventional circuits, a hillclimb course has many hard obstacles to hit. This makes it significantly more daunting but also quite a bit more rewarding when you get it right. While I stay well away from the car’s limit, I push hard enough to get adrenalin pumping and feel quite giddy with excitement after my third and fourth runs.

I’ll be the first to admit that I come nowhere close to setting the course alight, but I do leave Prescott hooked and itching for another go. The fact that hillclimbing is so easy on the wallet makes the day even more enjoyable, and it makes booking the next hillclimb so easy to justify.

Those wanting to enter motorsport or to compete on a budget should place hillclimbing high on their list of options; there really are few better ways to so conveniently experience the thrill of competition first-hand. And as our chat with Summers reveals (see below), those wanting to take things more seriously can also get behind the wheel of some of the fastest cars in the world – and all using the same non-race MSA licence.

The reigning champ reveals what it’s like to compete at the sport’s top level with 1500bhp per tonne at his disposal: 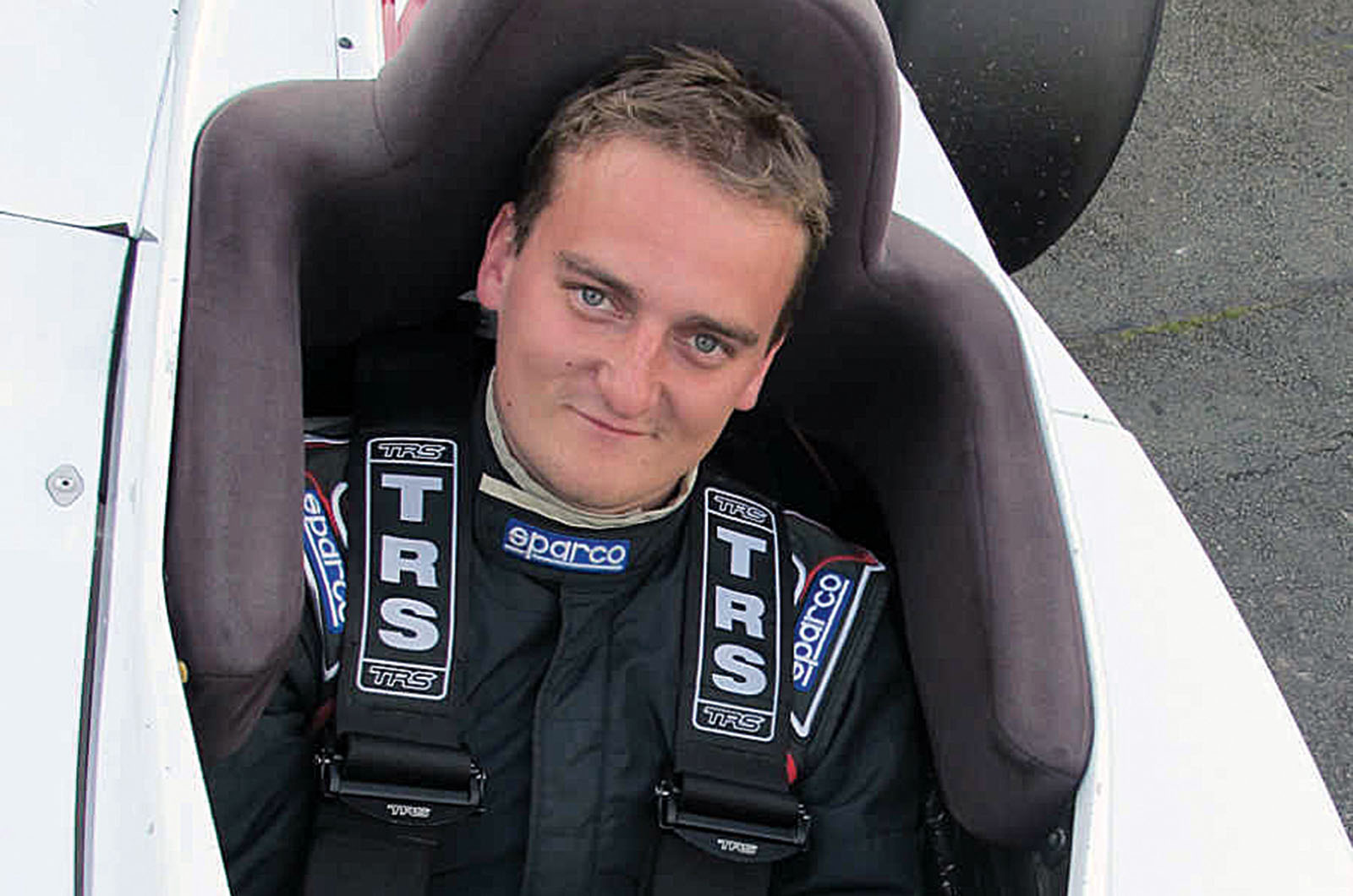 Some of the top-class hillclimb cars use Formula 1-spec hardware. What do you drive?

“The car I drove at Prescott had a Cosworth HB V8 engine — a Benetton Formula 1 unit that’s the same as the one [Michael] Schumacher won his first championship with. It has about 715bhp and is run with an Arrows F1 gearbox with paddle shifters.”

How does it compare to other top hillclimb cars?

“That car is probably the most powerful car in British hillclimbing and it weighs just 470kg, so we’re around the 1500bhp per tonne mark. But on a championship day most of the cars in that class would be hitting 120mph before the first turn here at Prescott — so they’re doing 0-120mph in about four seconds.”

Is that straight-line performance matched by Formula 1 levels of downforce?

“We’d be pulling about 3g lateral g-force in the corners in top cars, but even in the smaller superbike-engined single-seaters you’re pulling 2g. In fact, those cars are lighter than the top ones, so you can take Prescott’s first corner flat out at about 105mph in them.”

How do you approach a run in a car as fast as that but with so little practice?

“A good hillclimb driver will not come of age until five or six years in. When I was new I was quick but I wasn’t consistent and I certainly wasn’t safe. But now I can read the weather, so I can get closer to the limit more quickly.

“That is the thing you have to master: you have to go into turn one flat out or you lose. You go in and you have to believe that it’ll stick, even on cold tyres.”

I'd say a new set of tyres

I'd say a new set of tyres and brakes would need to be budgeted for! Plus an extra service. Good fun though if you had a few hundred to blow on a memorable weekend!
ianbak 21 November 2016

Easy on the wallet?

At £110 for event entry plus £180 for insurance I make it almost £75 for each of the four runs up the hill! Plus there are all the incidental expenses (getting there, membership, fuel, wear and tear on the vehicle and so on). So not exactly what I'd call cheap...
xxxx 21 November 2016

At £110 for event entry plus £180 for insurance I make it almost £75 for each of the four runs up the hill! Plus there are all the incidental expenses (getting there, membership, fuel, wear and tear on the vehicle and so on). So not exactly what I'd call cheap...

What does the insurance actually cover you for? And if you don't have it are you liable for hitting say a telegraph pole etc?