Road markings are just paint that you slap on the road, right? Wrong. Very, very wrong, as we find out
Share
Open gallery
Close
Share story

White lines, yellow lines, rumble strips… We take them for granted but the material they’re made from is designed to operate in some of the most challenging conditions imaginable. They’re replicated in laboratories like the one tucked at the back of Hitex International, a leading manufacturer and applier of road markings based in Ellesmere Port, Cheshire.

Here, Steve, one of the company’s most experienced chemists, mixes, heats, weighs and generally tests road marking formulations to destruction like some bearded wizard of the white lines.

In one corner of the lab is a portable skid resistance machine. It has an arm fitted with a calibrated rubber slider designed to pass over a sample of road marking. As it does so, it brushes it, generating a skid resistance value or SRV. A white centre line should have an SRV of 45+. 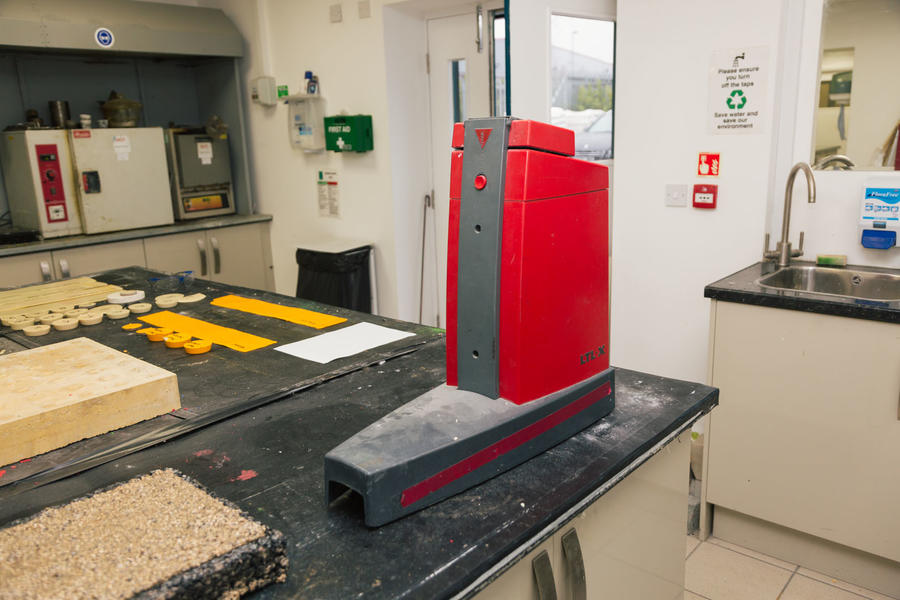 Close by it is a retroreflectometer for testing the night and daytime reflectivity of road marking samples. Beads derived from recycled glass provide the reflectivity.

Elsewhere in the lab, Steve (he won’t reveal his surname – “Confidential,” he says, only half jokingly) tests the colour fastness of road markings. He tells how Hitex saved the day on the M3 when Highways England noticed the orange-painted emergency refuge areas on the smart motorway were bleaching.

“We developed a more UV-stable pigment in the lab for them,” he says, proudly. I don’t bother asking for the recipe. Confidential, probably…

Easily the simplest but most ingenious piece of equipment in his lab, though, is the softening point tester. A glass beaker is filled with a calibrated heat-transfer liquid in which a circular disc of solid road marking material is suspended. A steel ball is then placed on the surface of the disc. The temperature at which the ball sinks through the material is the material’s softening point. It’s an important number to know, especially for road marking applications in extreme heat; for example, in Bahrain, where the road surface can easily reach 90deg C. 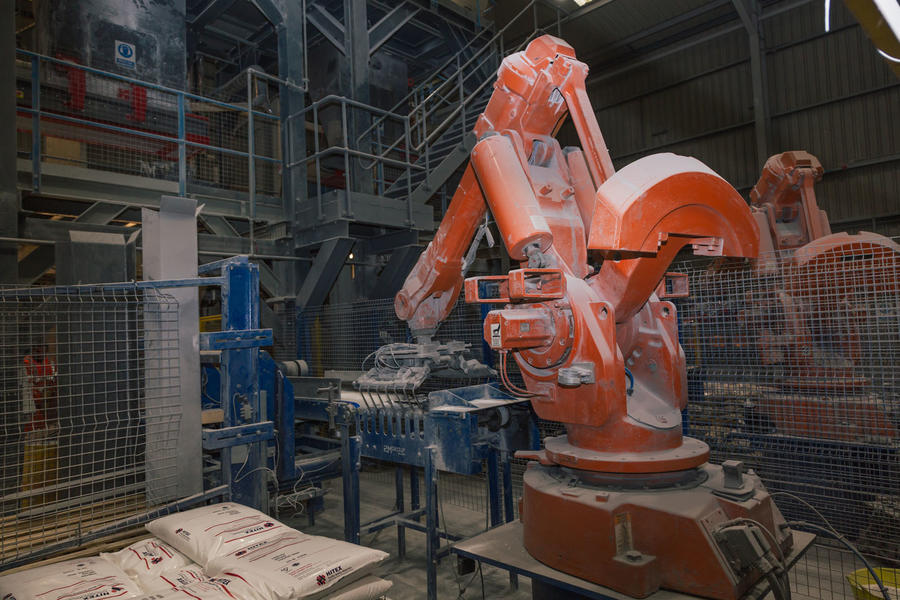 This man with no surname is a vital cog in an industry worth £270 million a year in the UK alone. However, his efforts and those of others like him in the labs of the other eight or so major producers of marking material will, in 2020, be augmented by tests of road markings and studs on real roads, following an agreement between Highways England and the Road Safety Markings Association (RSMA) that represents the road marking industry. They’ll be the first such tests in 10 years.

Engineers will be testing skid resistance, wet and dry reflectivity, and erosion caused by so-called ‘wheelovers’, or the action of millions of car tyres on the road markings.

Stu McInroy, head of the RSMA, claims the tests will help reduce accidents and their associated costs. “A study by the Road Safety Foundation in 2018 showed that every £1 of road safety engineering, including applying accurate road markings, returns £4.40 in societal benefit.” 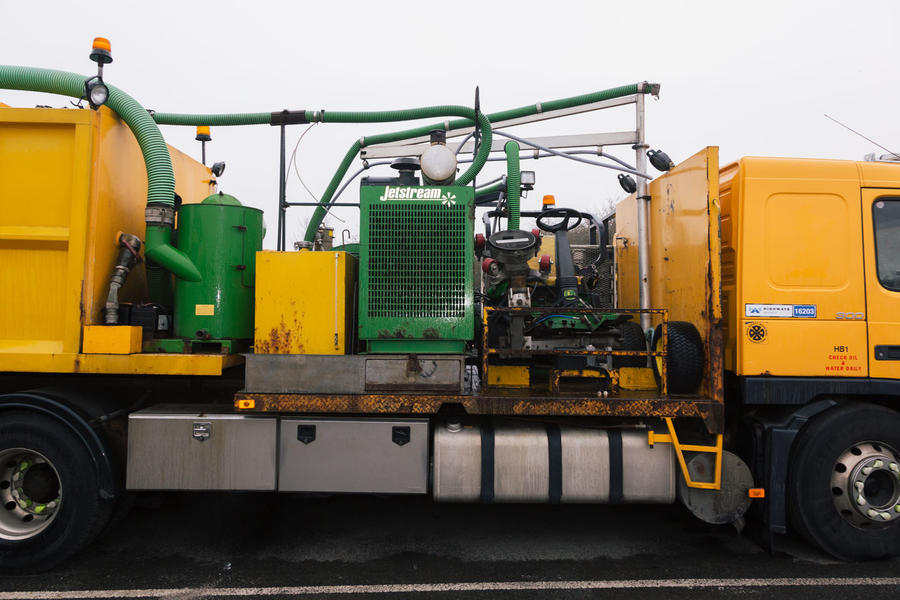 Bosses of trade associations are fond of quoting such figures, of course. McInroy’s are challenged by another study by Transport for London which suggested white lines give drivers a misplaced sense of confidence and that removing them could create “an element of uncertainty, reflected in lower speeds”. Its theory has since found a home in Exhibition Road, London; a so-called ‘shared space’ free of white lines, where pedestrians enjoy priority over cars.

“A shared space is fine for controlled, inner-city environments but not a busy A-road,” says McInroy. “Take away the white lines at a slip road and you’d soon know about it!”

I’ve come to Hitex International primarily to push a pram. That’s what road markers call the little trolley that ‘draws’ the white line on the road. There’s a big problem, though: it’s raining. 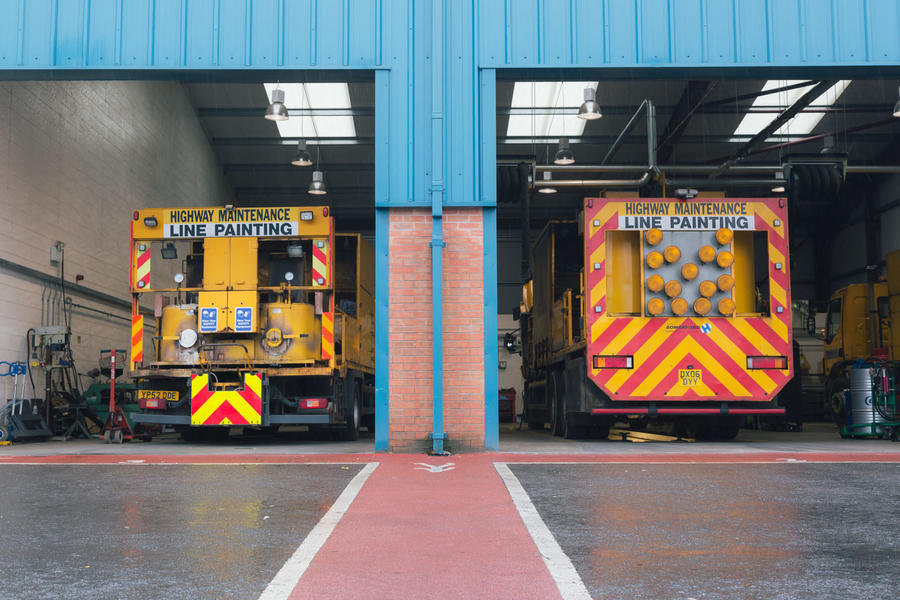 “Anyone who can come up with a road marking you can lay in the wet will clean up,” says Dominic Haynes, group marketing manager of Hitex International. He gazes out of his rain-lashed office window at the company’s fleet of road marking trucks parked up, going nowhere. They’re made by Somerford Equipment, owned by Hitex. The biggest is the Multimark, in the firm’s words “the ultimate truck-mounted solution for the application of spray, extrusion and profiled thermoplastic road markings”.

In addition, there are anti-skid/ high-friction surfacing vehicles, demountable road marking units, extrusion/profiled trucks for applying a wide range of markings of different densities and solo marking vehicles combining all operations in one vehicle. Easily the most interesting, though, is the road stud installation truck, which does exactly what it says. On board is a hydraulically operated stud-drilling head and a powerful suction system for removing road debris. 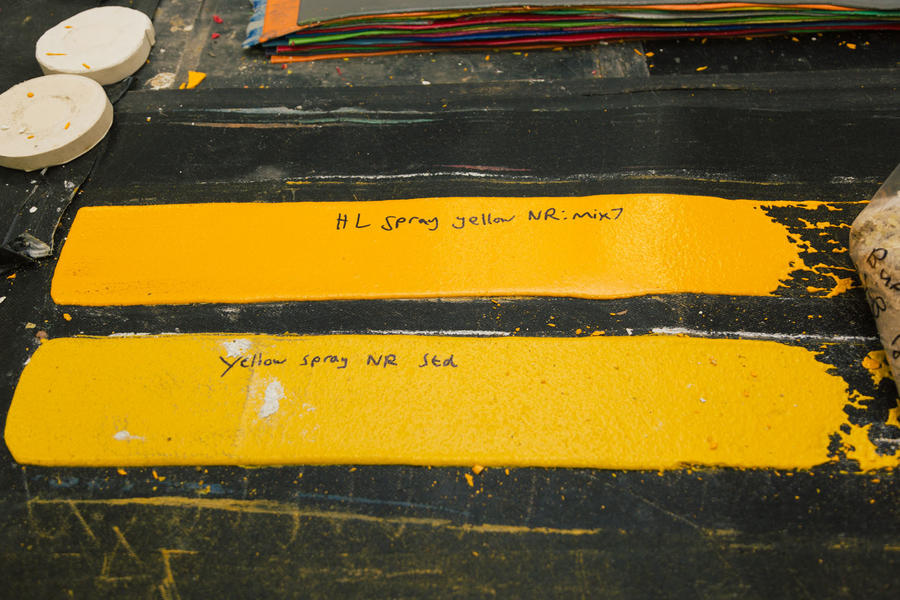 Hitex manufactures the road marking material it lays: a choice of the more traditional thermoplastic markings and cold-cure, durable thermoset markings made of methyl methacrylate, a compound that’s also used as a cement for replacement hips… Not only that, but Hitex also produces so-called preforms; pre-prepared road markings, such as cycle lane symbols, that can be applied like a sticker. Along with the line markings, they’re laid down by L&R Roadlines, another Hitex division and one of the UK’s biggest road marking companies.

Recent jobs have included marking out 7000 car parking spaces for Jaguar Land Rover’s new export centre in Staffordshire (it took three weeks) and marking the just-opened Newtown bypass in Wales, a road that was 70 years in the making and took Hitex two weeks to white line.

My time’s nearly up but I’m itching to have a go with the pram.

“Lay out this roll of preformed thermoplastic that we use for patching white lines under it,” says Haynes, joking. “It’ll look like you’ve just marked the world’s most perfect white line!”

In the wet, Dominic? Don’t be daft! See, I’ve not poured so much as a drop of white thermoplastic on the road, but after two hours at Hitex, I’m already talking like a seasoned pro. 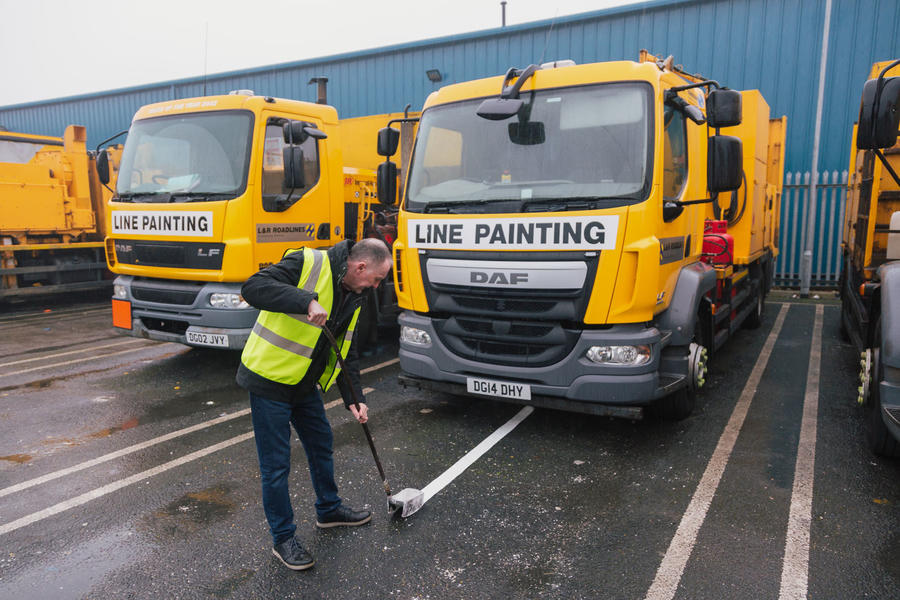 Line of duty: the government needs to rise up to it

They may look like they’re just painting Tarmac but road marking companies are thinking high-tech.

“Already, there are small, GPS-guided pre-marking robots that can mark the lines before they’re painted,” says Dominic Haynes, group marketing manager at Hitex International. “They save money and are safer than having an operator in the middle of the road.

Stu McInroy, CEO of the Road Safety Markings Association, says autonomous cars will force an improvement in the condition of road markings.

“Cars will rely on cameras that read road markings to get around. To read them accurately, the markings will need to be in good condition,” he says. “To help, cars could send wheelover data to councils, telling them which roads are busiest and so require closer monitoring of road markings.”

However, McInroy fears the government hasn’t grasped the value of clear markings.

“This is a particularly imbalanced prospect as Britain’s most dangerous roads are rural, single-carriageway A-roads. Improving the road markings on these roads would reap significant reward in terms of lives and money saved.”

How Autocar writers would fix Britain's roads and transport​

I know there's a lot more

I know there's a lot more traffic on the roads nowadays, but what ever they use for white lining only seems to last about 5 minutes before its worn away. Still, I suppose they want to keep their business turning over.

Good line marking is important but on dual carriageways and motorways having decent Catseyes is invaluable. With them you don't really need street lighting.