BACK TO ALL NEWS
Currently reading: Driving the legends of the secret Mercedes archive
UP NEXT
Analysis: Why the decline in diesel sales has slowed in 2022

Driving the legends of the secret Mercedes archive

Mercedes-Benz preserves an example of every model it produces. We sample everything from 300 SL to AMG Hammer
Open gallery
Close

Car makers love to play on their history and former glories, but none has made an investment to preserve its past quite like Mercedes-Benz.

The company’s vast Classic collection now has more than 1300 vehicles and grows every year. Mercedes has saved at least one example of everything it has produced throughout most of its long history, plus numerous racers, one-offs and prototypes. Only a small percentage of these are displayed in the museum at Stuttgart at any time, and although others are lent to other institutions and dispatched to historic events, most live in the careful stasis of long-term storage.

Occasionally, though, Mercedes lets some of them out to play. At the recent opening of the company’s vast new proving ground at Immendingen, 80 miles from Stuttgart, journalists were given the chance to experience a selection of Classic’s brightest stars in a controlled environment. And I was lucky enough to be invited to this hands-on history lesson.

It was definitely a shallow dip rather than a deep dive, the combination of social distancing and Germanic organisation – with cars in loosely themed groups – limiting time in each to no more than 10 minutes. For some of the larger groups, we had to make choices about what to miss out on.

My day starts with some very gentle off-roading in a G-Class 4x4² (Classic didn’t want to risk any body damage), but the next rotation turns things more interesting. This takes place on Immendingen’s dynamic handling circuit and features four compelling performance cars – a 190E 2.5-16 Evolution II, a CLK DTM, an SLS Black Series and a new GT R – as well as DTM and Formula 1 veterans Bernd Schneider and Karl Wendlinger to act as chaperones. 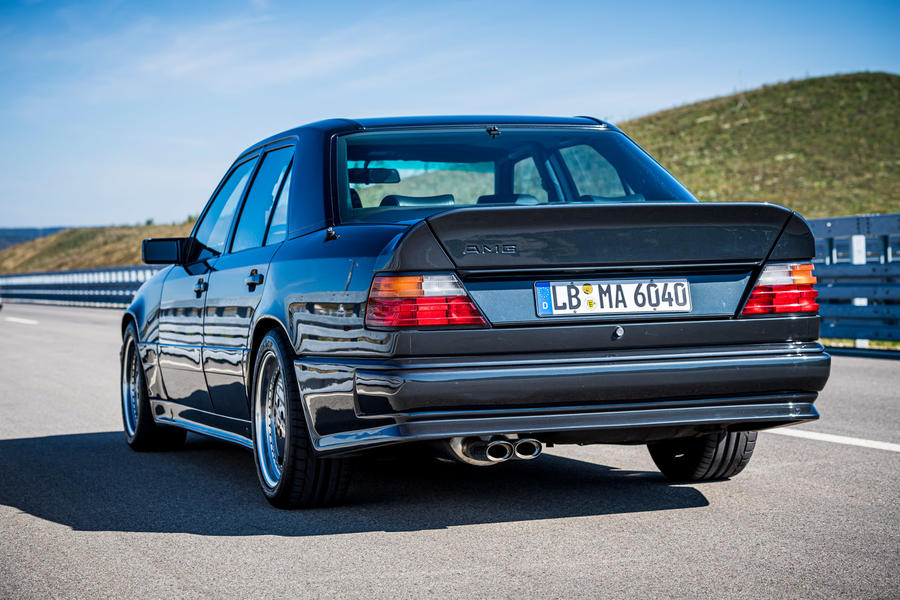 Being given free choice of what to drive first is a proper ‘where do I throw my beach towel?’ moment, but I opt to start with the 190E, both as a personal favourite – I own a non-Evo version of the same car – and because I suspect that it will feel tame compared with the others.

The latest Mercedes to wear the Black Series badge has a lot to live up to - thankfully, in the right conditions, there is no other car like it

Originally built to homologate aerodynamic changes for the late-era 190E DTM racer, values of the limited-to-500 Evo II, with its butch bodykit and huge rear wing, have exploded in recent years. Classic’s low-miler is almost certainly one of the most valuable cars here. But the interior is effectively identical to the standard car’s, and a mechanic confirms to me that the changes over the regular 2.5 were only the bodykit, a sportier camshaft, four-pot brake calipers and a hydraulic front lift.

It performs keenly on track and revs more enthusiastically and sounds rortier than its standard sister, but there’s noticeable lean during hard cornering, with the effect exacerbated by poor seat bolstering. I’m also privately pleased to discover that the notoriously grumpy dog-leg shift of the Getrag gearbox in Classic’s minter feels notchier and less accurate than it does in my 160,000-mile car.

The CLK DTM is even rarer-groove, as one of just 100 cars made in 2004 and combining a 580bhp version of AMG’s supercharged V8 with a full DTM makeover. It sounds great and pulls more g-force than the 235bhp 190E, although the combination of a torque-converter automatic ’box and vast motorsport shift paddles is a strange one. 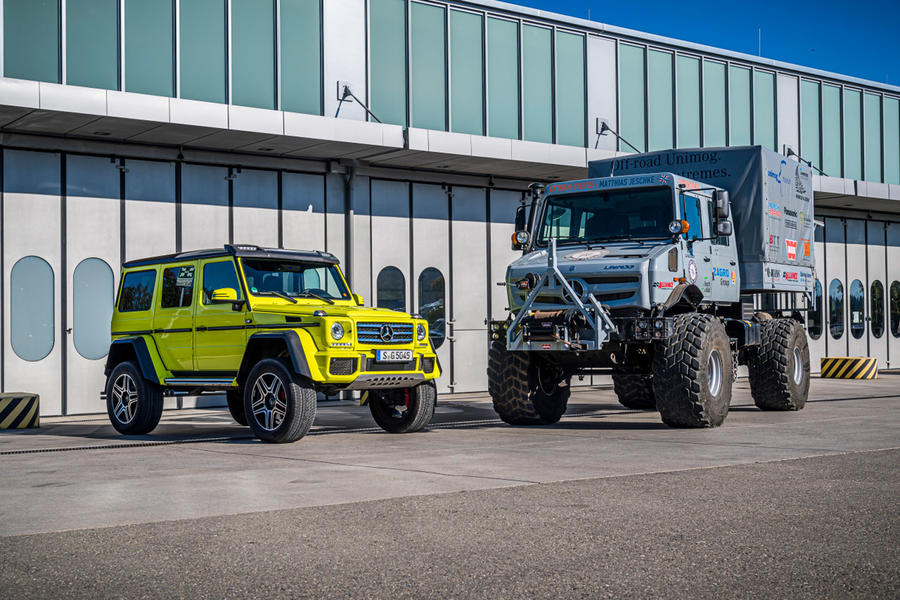 Wendlinger is setting a cautious pace ahead in a fully liveried GT Formula 1 safety car – which is surprising until I experience some lurid power oversteer as the CLK’s old-fashioned stability control proves the slowness of its reactions.

On back-to-back drives in the SLS Black Series and GT R, I’m following another GT driven by Schneider. He’s a man who definitely doesn’t do slow. It’s a fascinating experience of evolution; the GT R is grippier and both achieves and holds onto speed much more easily, but the SLS sounds better, turns more keenly and delivers a much more organic-feeling driving experience.

Next up is the earliest stuff, including the chance to experience a near-exact replica of the original 1886 Benz Patent-Motorwagen and a gentle drive in a 1937 320 Combination Coupé whose limited braking powers make 78bhp feel more than adequate. There’s also a terrifying ride in a 40bhp Simplex from 1903, driven by a man who seems determined to set a record around a course of some of Immendingen’s tighter access roads. Meeting a heavily disguised AMG One prototype as we speed along serves as a reminder of for how long Mercedes has been making fast cars.

The next group is the least demanding, a ‘country road’ group drive along some of the proving ground’s 42 miles of replicated real-world routes. The pace is gentle and even an old Mercedes geek like me can raise only modest excitement for a standard W123 230E with a slushy three-speed automatic gearbox and manual windows. A 560 SEC feels more special, if no more thrilling, its V8 combining effortless progress with a big-cube burble.

I notice Japanese warning labels on the coupé, leading me to discover that Classic often buys representative used cars for use in driving events, rather than risk the mint-condition examples it saves from production. The last-built example of each model is automatically sent to the collection, and it will always be fitted with the most popular engine option and painted in the most-ordered colour.

The highlight of this laid-back group is definitely a 1957 300 SL Roadster, a car that feels truly special even when driven at a gentle pace. Its fuel-injected engine was cutting-edge at the time (chosen for reliability rather than just performance), and it responds keenly to the gentlest accelerator pressure. Ergonomics and control weightings feel better than those of many alternatives launched 10 or even 20 years later. Good Roadsters now cost well inside seven figures, so I have some saving up to do if I want to drive one again.

The timetabling fairies have saved the best until last for me: an all-star group to be driven exclusively on Immendingen’s 2.5-mile oval. This track has been built for autonomous vehicle development, rather than high-speed work, but it’s still the quickest part of the facility. Of the four cars, the 300 SL Gullwing was the highlight of the day, run close by the C111. Mercedes made 16 of these mid-engined ‘research vehicle’ test beds, most of which ran Wankel engines, but this one has a 200bhp 3.5-litre V8. It also has a sideways-mounted radio in its centre console, like the De Tomaso Pantera. The combination of 1970s Mercedes instrumentation and a huge steering wheel with a mid-engined driving experience is a strange one, and although it didn’t seem to be going that fast on the wide track, I get back to the staging area to learn the kmh speedometer actually reads in mph. By comparison, the AMG 300E Hammer, a 385bhp V8 version of the W124 E-Class, delivers impressive-for-today velocities without breaking a sweat.

My final car of the day is the dictator’s favourite: the 600 Pullman limousine. This example formerly belonged to the German government and still has bits of what was once high-tech communication equipment on board. The driving position is remarkably cramped for something so big; there’s a sizeable bulkhead between it and the rear passenger compartment. Performance from the understressed 250bhp 6.3-litre V8 is leisurely and lean angles on the ultra-soft air suspension are acute, but the Pullman feels pretty much unstoppable when running at speed.

Mercedes is rightly proud of its Classic division, which is bigger and much more comprehensive than any other manufacturer’s equivalent. History matters to the company, which diligently adds cars to its collection like a connoisseur laying down fine wines. It’s a long-term investment but one that, on the basis of a day with its highlights, I’m very glad Mercedes has been prepared to make.

The beginning of Benz - and of cars 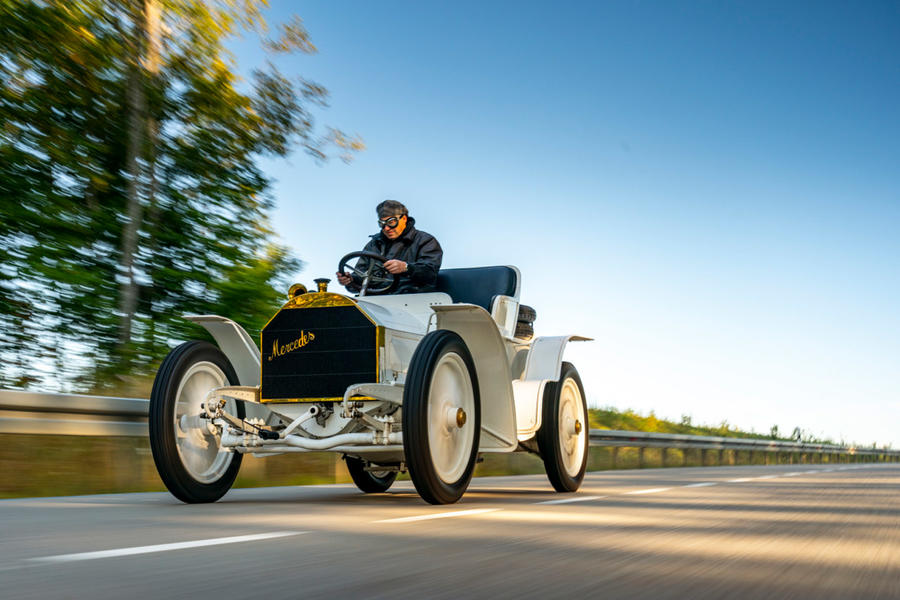 Mercedes’ commitment to its history doesn’t quite reach the start; the sole surviving Patent-Motorwagen is in Munich’s Deutsches Museum. But to celebrate the centenary of the world’s first car in 1986, it built a small run of near-exact replicas (in effect inventing the continuation car), and I got to drive one of these.

Getting it started is the hard part, swinging the single-cylinder engine into life and risking a crushed finger when it eventually fires up.

The Patent-Motorwagen obviously predates most automotive innovations, including the cooling circuit and the steering wheel. Cooling is done by a water-filled sleeve that needs emptying frequently, lubrication by gravity-fed drippers that leave a trail wherever it goes. Engine speed is set using a rotary restrictor valve over the air intake; it runs at around 400rpm to drive.

Moving off is no harder than pushing forth the lever to the right of the seat, which moves a leather drive belt into contact with the crank. The engine bogs down to a chugga-chugga as it takes the load but is almost impossible to stall.

Once off, the Patent-Motorwagen gathers speed quickly, the sensation of velocity enhanced by the exposed driving position and the suddenness of its responses to steering inputs. Top speed is 10mph, but it’s one of the most thrilling cars in the collection.

The biggest highlight of the day was definitely the Gullwing. The 300 SL Coupé was one of the fastest and most glamorous cars in the world when it was introduced in 1955, and it still feels special 65 years later. Getting in is a scramble over fat sills into minimal, check-trimmed bucket seats. I instinctively reach for a seatbelt only to find that there isn’t one, because the Gullwing predates their introduction.

Once on the move, it’s louder and sounds angrier than the SL Roadster. It’s faster, too – certainly when facing a wide, empty track. Beyond the stipulation for caution on the banked turns, my in-car chaperone takes a commendably liberal attitude to speed, only making slow-down gestures as the speedometer needle passes the 200kmh (124mph) mark, at which point the car was still accelerating hard. That was probably sensible given the all-round drum brakes.