BACK TO ALL NEWS
Currently reading: From the archive: The benefits of the new V8 engine
UP NEXT
2025 Mercedes-AMG EV sports saloon to rival Porsche Taycan

From the archive: The benefits of the new V8 engine

In 1913, we detailed why the V-configured eight-cylinder engine was the optimum in every respect
Open gallery
Close

It was certainly not the first to use a V8. In fact, the first was the Rolls-Royce V-8 of 1905, which was intended to steal sales in towns from electric cars (ironic, no?) but was canned after just three examples were produced. And the first V8 for any application was introduced the year before, by the French Antoinette company, for use in aeroplanes. There was even a straight eight back in 1902.

As the De Dion Bouton models gained popularity, Autocar in 1913 explained the benefits of the V8 and why it seemed like the optimum engine configuration for the future.

"Everyone will remember what a tremendous volume of ink was spread over the subject when the six-cylinder engine first came amongst us," began our man W.G. Aston, "and definitely marked a new epoch.

"Now there are good grounds for supposing that another such epoch will be marked in the comparatively near future by the eight-cylinder engine, which is even more superior to the six-cylinder than the six-cylinder is to the four-cylinder.

"When the four-cylinder was standard and the six-cylinder came along, the latter represented a very simple proposition. There were two more cylinders, and consequently it was easy to see that somewhere or other in the cycle of operations the crankshaft received two more impulses. With the eight-cylinder engine the case is rather different, because here the cylinders are set at an angle with one another, and not all in a row along the crank chamber."

Because the V8 engine thus looked like a pair of separate four-cylinder engines bolted together, many people assumed that it would merely operate in the same manner but with twice the power. Not so. "In some respects," continued Aston, "the V type and the all-in-line type are similar, in others they are totally different. As a case in point, the latter has not a ghost of a chance of coming into favour.

"Why this should be so is clear enough. The all-in-line type is of enormous length, so the body space of the vehicle would have to be very restricted for the chassis to accommodate it. Then, again, it is very much heavier than the V type, because it has twice as large a crank chamber and twice as long a crankshaft. Its latter must therefore be made exceedingly strong, so that weight in this part goes up disproportionately.

"As far as balance and torque are concerned, in each case the balance is perfect, for there are no unbalanced forces whatever; whilst in each case the crankshaft receives four impulses per revolution.

"The all-in-line eight-cylinder's crankshaft consists simply of two four-cylinder crankshafts placed in tandem, the one having its webs at an angle of 90deg to the other. In the V engine, the second four cylinders are applied to the first crankshaft, but are themselves arranged at 90deg to the first set of cylinders."

This meant much more torque could be produced, as we explained.

"Let us imagine that the V8 engine is tipped over on to its side. The crankshaft having its throws at 180deg, the impulses are received at equal intervals, which may be easily remembered by considering the crankshaft as the hour hand of a clock, and the first revolution of the flywheel as AM and the second as PM. 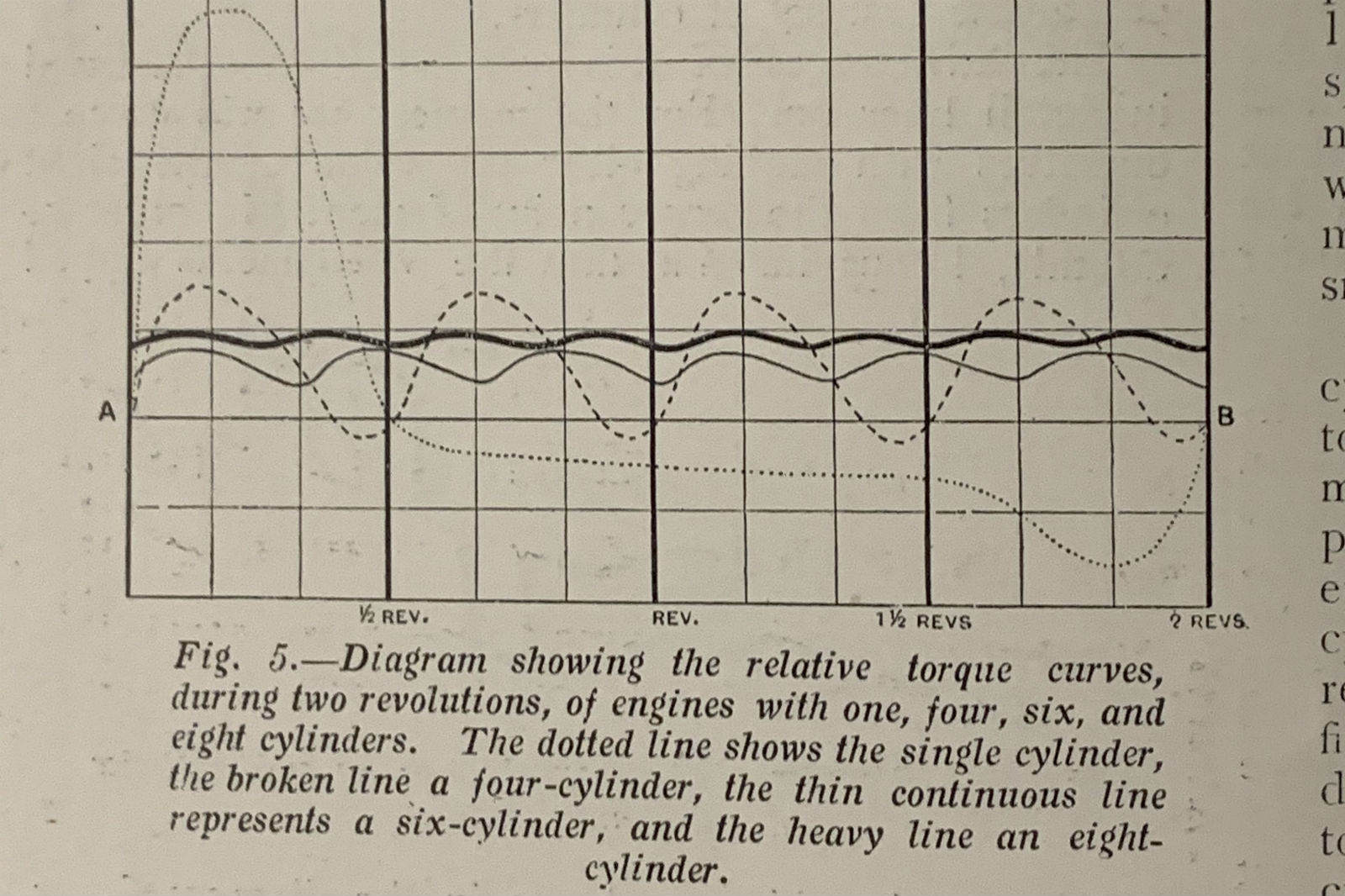 "The crankshaft receives its impluses from the four vertical cylinders at 12AM, 6PM, 12PM and 6AM. Now let us consider the horizontal group of cylinders. These give their explosive impulses at 3PM, 9PM, 3AM and 9AM. It will thus be seen that no two explosions actually occur at the same time, but that they all follow one another at equal intervals of a quarter of a revolution. The turning effect, or torque, is therefore twice as good as that of the four-cylinder engine."

Using the same method of visualisation, Aston showed that the straight six would give its impulses at 12AM, 4PM and 8PM, meaning the V8 was superior by 33%. The V8 would have the flattest, and therefore closest to ideal, torque curve.

So why not use a V12 or V16? The answer was diminishing returns, with those designs being larger and heavier yet not significantly better-performing.

There were five more major benefits to be outlined as well, yet no obvious drawbacks.

These included the ones we have covered already. Then there was cooling, for the "water circulation has no tendency to form pockets round the valves," unlike with a straight six, and lubrication, because "shorter oil passages and a smaller length of crankshaft are advantages in this respect".

"In brief," the 1913 article concluded, "the great advantages of the eight-cylinder engine are its small size, light weight, excellent torque, perfect balance and good carburation, in all of which points it is equalled by no other type of engine at present applied to motor car production."