BACK TO ALL NEWS
Currently reading: Volkswagen Golf R shown in Detroit
UP NEXT
Analysis: winners and losers in the automotive CO2 race

Hot four-wheel-drive Mk7 Golf R promises to be the quickest yet with a 0-62mph time of 4.9sec
Share
Open gallery
Close
Share story

The new Volkswagen Golf R has been seen at the Detroit motor show.

The car comes equipped with 296bhp and sports car-baiting levels of performance, including a 0-62mph time of less than five seconds.

This, the fourth-generation R version of the Golf, is the most potent yet, with four-wheel drive, a turbocharged 2.0-litre petrol engine and front and rear electronic differentials among the spec highlights.

The Golf R’s 296bhp, 280lb ft 2.0 TSI engine is a significantly updated version of the EA888 found in the new Golf GTI. Changes over its application in the GTI include a new cylinder head, pistons, high-pressure injection valves and a new turbocharger.

Equipped with a six-speed manual gearbox as standard, it can crack 0-62mph in 5.3sec. But when mated to the six-speed dual-clutch automatic transmission, the 0-62mph time drops to a Porsche 911-rivalling 4.9sec. Top speed is limited to 155mph.

The Golf R is equipped with VW’s latest-generation 4Motion permanent all-wheel drive Haldex system. VW says the system eradicates wheelspin and slip, and up to 100 per cent of the torque can be sent to each of the axles depending on the driving situation. XDS+ electronic differentials are fitted to the front and rear axles to brake individual wheels if high loads are detected, helping to reduce understeer. Uprated brakes are also fitted.

The new Golf R’s suspension is lowered by 5mm compared with the Golf GTI and has been stiffened and tuned for a more involving drive. VW claims to have improved both the ride comfort and agility of the Golf R compared with the previous model. A progressive steering system is also offered, as is an optional Dynamic Chassis Control (DCC) system that adapts the dampers to one of three standard modes: Comfort, Normal and Sport.

Opting for the DCC also adds the Drive Profile Selector, which tunes the Golf R to one of five driving modes: Eco, Normal, Comfort, Sport and Race. The driver will also be able to mix and match the traits that alter in these modes — such as gearshift patterns and throttle response — through an Individual mode.

Styling changes include new front and rear bumpers, wider sills, a rear diffuser and twin exhausts. The Golf R is fitted with 18in alloys as standard and 19in wheels will be available on the options list. Inside, sports seats are offered along with a bespoke trim.

Volkswagen says the Golf R will go on sale in spring 2014, and prices are tipped to come in below £30,000 for a manual-equipped three-door Golf R, with the DSG-equipped cars carrying a premium of around £1200. 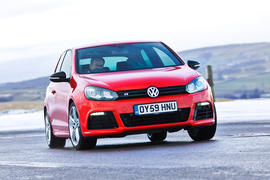 ...Overalll, but woah they are getting expensive. I'd take the 5 door R with the bigger wheels and some other options so yeah, you'd be looking at 36-ish K like another poster said previously. 36 grand on a 5 door Golf new....?? My personal problem with that price point (if I were lucky enough to be in this market) would be that there is so many low mile 2nd hand cars out there that are just a little bit more special than a Golf for that money... Maybe I'll understand one day when I've got 36-ish to blow on a car : )
spqr 23 August 2013

The true BMW 1 Series rival for the Golf R is not the M135i but the M135Xi but BMW UK do not import it. Given that the price difference between "sDrive" 3 Series cars and "xDrive" 3 Series cars is £1535 that would mean a "base" 3 door manual M135Xi should be around £32105 which is not too far off VW's estimate for the equivalent Golf R. But the BMW 1 Series (even in M135i guise) is an ugly car. The Golf R like its siblings may well be artless and anodyne but at least it is not ugly. Looks are subjective but if I spent £30000+ on anything including a car I would want to look at it and think "hmmm that is nice", not "what was I thinking?" On another note a local BMW dealer tried to persuade me to change my E92 3 Series Coupe for an M135i citing as a major selling point the superiority of the straight six engine over a 4 cylinder turbo in a Golf GTi. Strange then, I said, why have BMW just got rid of the straight six in the 3 Series (and 4 series) and replaced it with an apparently "superior" 4 cylinder? Oddly he could not answer that one.

I'm assuming the next gen of

I'm assuming the next gen of fwd VW will have the latest differentials and power delivery systems missing in the last models.

The  megane was a fast car around the Ring using fwd, and the signs are honda are going for more with the Type R. If a touring car can drive well with 300bhp, a road car can using bigger wheels to make up for less tread and lots of clever tech race cars are not allowed.