BACK TO ALL NEWS
Currently reading: Volvo launches autonomous driving programme
UP NEXT
2025 Volkswagen ID 1 is Spanish-built, £17,000 entry EV

Members of the public will eventually get to use self-driving XC90s; the trial will come to the UK in late 2017 or early 2018
Open gallery
Close

Volvo has officially launched its autonomous driving trial in Gothenburg, Sweden, ahead of the trial coming to the UK.

For now, the Volvo XC90s that are part of the trial will be piloted (as reduced control of the vehicle somewhat diminishes the term 'driving') by engineers, until the trial moves on to the phase where it's ready for the cars to be passed on to families. Volvo will then collect real-world driving data to further develop its software for future production models. A Volvo spokesman said that the handover of the cars to families was unlikely to be before late 2017 or early 2018.

The brand will also be launching the UK’s biggest autonomous driving trial in London next year, called Drive Me London. According to the Volvo spokesman, this will begin in mid to late 2017, with engineers behind the wheel of the cars. A similar timeframe will be in place for the UK trial to pass the cars on to non-engineer drivers.

Before the trial starts in the UK, Volvo is still identifying the roads upon which the trial may take place, before further steps are taken ahead of the trial's launch in this country. Understanding the traffic conditions of the selected route is part of this development.

At first, the cars will be semi-autonomous, with partial human control of the throttle, brakes and steering, but later on in the trial Volvo says the cars will be fully autonomous on motorways and some A-roads.

People will be able to use each XC90 as their own daily vehicle, with Volvo saying the approach allows it to collect the most realistic data possible. The alternative would be to use controlled test environments, but Volvo says this would provide it with unrealistic data.

The Swedish manufacturer is yet to decide how it will choose appropriate candidates for the public test, but likely options include contacting current Volvo owners or allowing people to apply.

Volvo says the programme will commence in 2017 before growing to include up to 100 cars in 2018. It claims this will make it the largest and most extensive autonomous driving programme of its type in Britain. 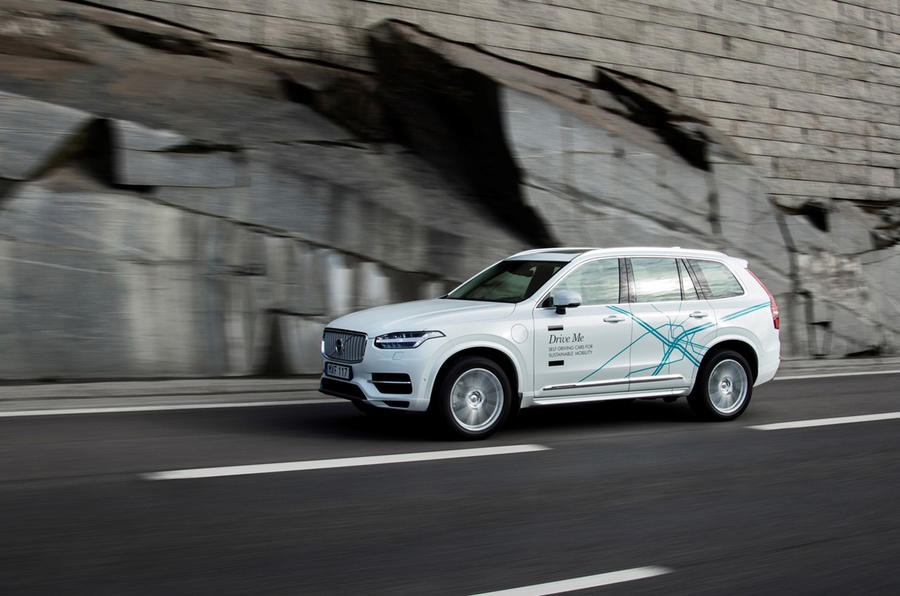 The trial will run simultaneously with another that will take place in Volvo’s Swedish home city of Gothenburg, and a similar programme that’s set to commence in China.

“Autonomous driving (AD) represents a leap forward in car safety,” said Håkan Samuelsson, president and chief executive of Volvo. “The sooner AD cars are on the roads, the sooner lives will start being saved.”

Samuelsson believes vehicles with autonomous capability on certain sections of road will be in production in just five years. “Without doubt, crash frequency will dramatically reduce.”

The Volvo boss has asked legislators to mirror the work his company is doing by working on new infrastructure to facilitate autonomous cars. “The car industry cannot do it all by itself,” he said. “We need governmental help.”

Volvo has been demonstrating its autonomous technology since last year and more recently announced that it wants to sell a total of one million electrified cars (including fully electric and plug-in hybrid models) by 2025. The car maker says these ambitious plans reaffirm its status as a world leader in future car technology.

this is going to happen, and good on Volvo for getting a heads up- Volvo aren't burying their heads in the sand.
Mini2 27 April 2016

When will they realise that there's more to driving than around the London area? Also seems quite narrow to go for Volvo-only drivers and 100 cars still seems a relatively small sample. Should be an interesting study and I hope Volvo share things with the public early-on...
Walking 27 April 2016

This seems to rely as much on smart roads as smart cars. It will be interesting to see how far governments are prepared to invest.
View all comments (5)