BACK TO ALL NEWS
Currently reading: BMW M4 GTS's water injection system to feature on other cars from 2019
UP NEXT
Testing the UK's newest circuit in a Porsche Cayenne Turbo GT

Bosch water injection system was first introduced on the BMW M4 GTS; it can boost fuel efficiency by 13% and reduce CO2 emissions by 4%
Open gallery
Close

The water injection system from the BMW M4 GTS will feature in more car models from 2019, as its maker Bosch is now offering the technology to the wider automotive market.

The system works by spraying a fine vapour of distilled water into an engine’s intake before fuel combustion, reducing engine temperatures and therefore decreasing knocking, which wastes fuel. The results improve efficiency and increase engine power output as a result of faster ignition times.

Although the system was first introduced in BMW’s track-focused coupé and can offer a 5% boost in power, Bosch says its primary focus is to improve fuel economy and reduce emissions. It backs this claim up with promise of a boost in fuel efficiency by as much as 13% and reduction in CO2 emissions by 4%, according to the internationally recognised WLTP (Worldwide harmonised Light vehicles Test Procedures).

Speaking exclusively to Autocar, Bosch global project manager Fabiana Piazza said that these gains can be felt on anything from a supermini to a supercar.

“The system works best on cars with an output of more than 80kw (107bhp) per litre,” she said. “We’re launching it into the market now as tighter legislation and new real driving emissions tests are increasing the importance of this technology in all cars.” 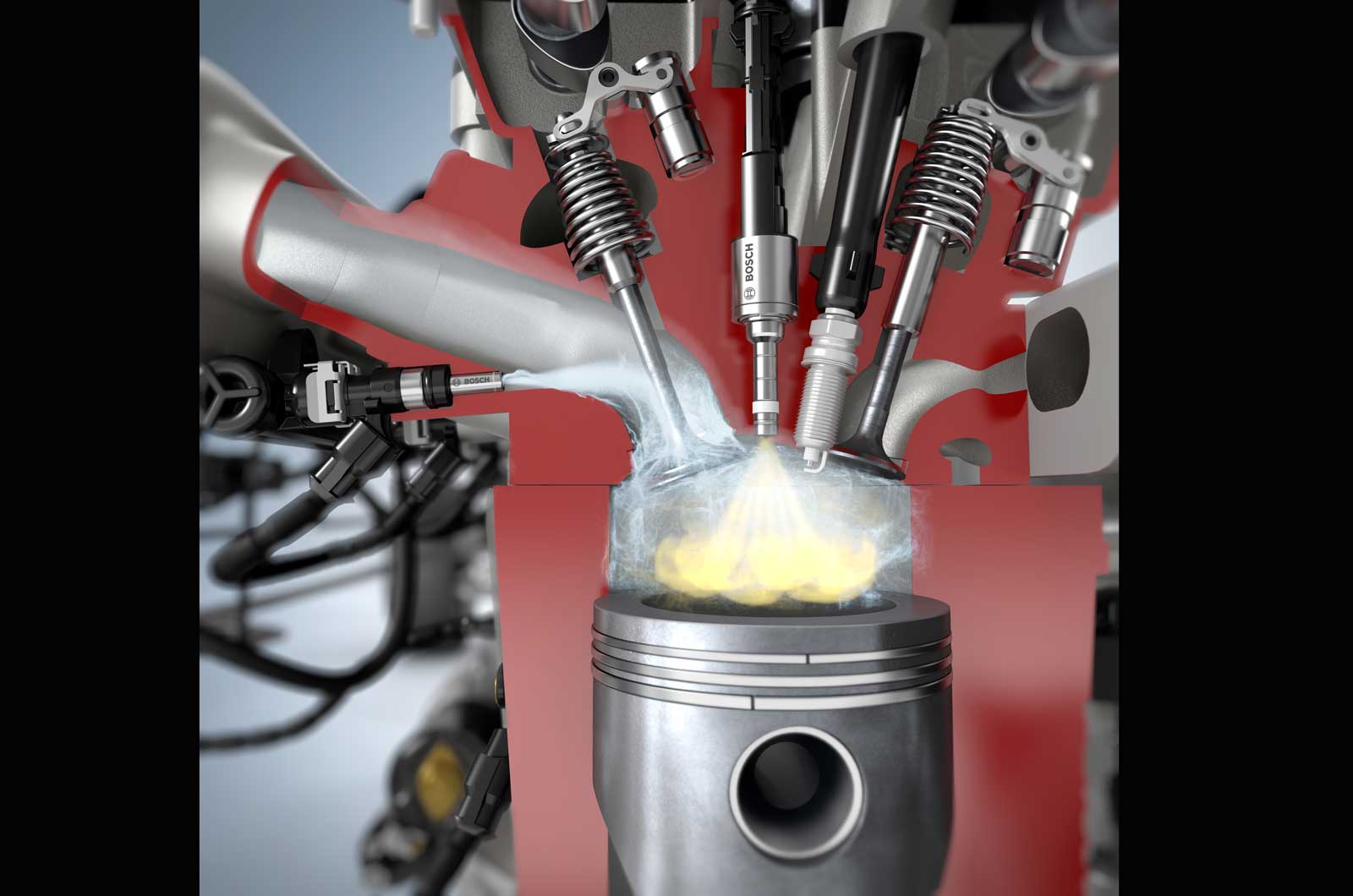 Piazza explained that the system Bosch is offering to the market is basically identical to the one on the M4 GTS. Her colleague, Martin Frohnmaier, who is the project’s lead, added that BMW’s co-operation was highly beneficial to overall development.

He said: “It’s pretty normal thing to have a pilot customer to develop the system together before offering it to the market, and now as we launch to the wider market the system’s costs will come down as volume goes up.”

Due to the small quantity of water used during running, the amount needed to be stored is very low. The M4 GTS, for example, uses a five-litre tank stored in the boot. While volumes can vary depending on each model and space available, Bosch says in most cases the tank will only need to be refilled every 1800 miles on average.

In the case that a tank runs empty, the engine can still run smoothly but with reduced power and efficiency. Bosch also says that due to the water’s vapourised state, there is no risk of it causing rust inside the engine. 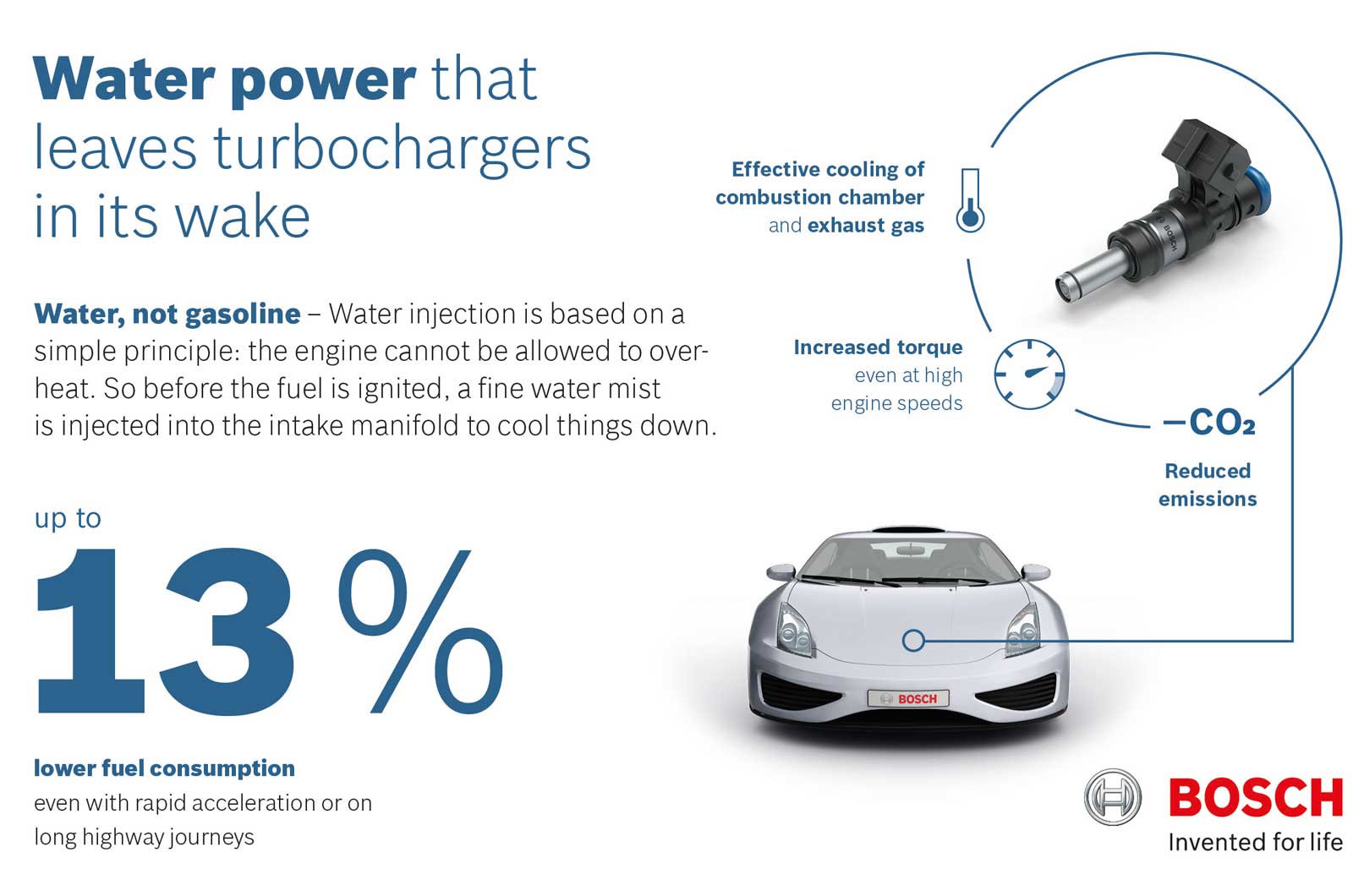 For the coldest markets, Bosch is investigating the use of a water heating system to prevent freezing. The company is yet to decide whether such a system would utilise heat from the engine or require its own electrical heating components.

“We are in contact with major automotive makers already, but we can’t talk about them in more detail at this stage,” said Frohnmaier. “We can say that we expect the system to make mass production from 2019.”

BMW’s position as co-developer of the system makes it a likely first candidate to introduce water injection into more of its models. That being said, Bosch also supplies other parts to almost all of the major manufacturers, so the German company faces very few barriers to expanding business.

While different rival systems are currently offered on the aftermarket, Piazza said the Bosch system is “an innovation that only Bosch makes,” meaning it looks set to become the first water injection system to be used on such a large scale.

November 2019 is here, watter injection is in no one car!

Or effect is ONLY during accelerating and speed over 200km/h and NOBODY need it? Until now for last 30-40 years production of this high efficiency technology in engines with -13% fuel consumption was only 700 cars in 2016-2017, when world production is 110 mil. cars yearly?

Yet again BMW releases something invented long ago and at the same time claims that they are innovators. This time they are copying General Motors who introduced the worlds first turbocharged production engine in 1962, a 3.5 litre aluminium V8 (later sold sans turbo to Rover), and at the same time introduced the worlds first water injection system on the same car and engine, the 1962 Oldsmobile F85 Jetfire. A month later GM's Chevrolet division also introduced a tubocharged water injected engine, this time the flat six of the Corvair. It took BMW another eight years to develop a turbo and fifty five years for water injection. So not exactly cutting edge is it?
bezor Ta 3 September 2016

Every automaker that uses this tech should pay dividend to BMW. It's their quest for better tech and sporty cars that often leads the way, to make the best sporty engines, instead of bigger engines or adding bigger turbos. But as always BMW will be generous and let others follow, at no extra charge :)
View all comments (7)