BACK TO ALL NEWS
Currently reading: How Audi e-tron is making EV charging even easier
UP NEXT
First drive: 2022 BMW XM prototype

How Audi e-tron is making EV charging even easier

When you’re topping up an electric car on-the-go, speed and convenience are everything. That’s why Audi e-tron is changing the game for charging
Open gallery
Close

The biggest shift in the switch to electric driving is how we power our journeys. That’s why, when developing its fast-growing line-up of e-tron models – from the Audi e-tron SUV and the Audi GT e-tron sportscar to the new Audi Q4 e-tron Sportback – Audi put charging at the heart of the design process.

Building on its 40-year ethos of ‘Vorsprung durch Technik’ (or ‘progress through technology’), Audi has developed advanced under-the-skin e-tron technology that delivers more range and faster charging times – as well as in-car navigation and smartphone apps that make finding and paying for charging easier. Looking further ahead, Audi is even re-imagining the 'petrol station of the future’. Here’s how. 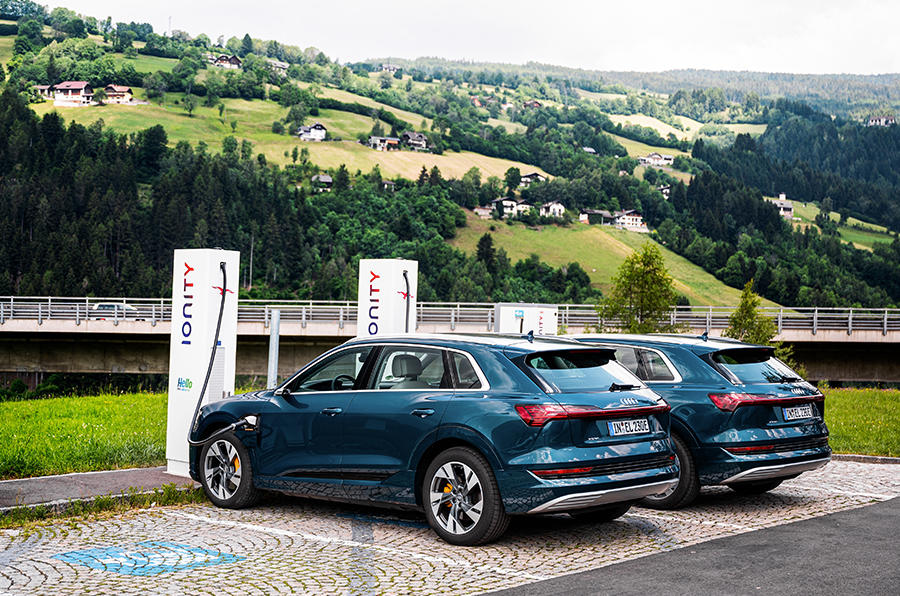 Easier charging starts with having more range from the off. Lithium-ion batteries are the most advanced and reliable type currently available for electric cars, and Audi is continually honing this technology to make batteries that deliver more range more efficiently, while also being smaller and lighter for enhanced car dynamics.

Alongside this, Audi has developed technology that makes electric driving more efficient, without changing how you drive. Take regenerative braking, which uses friction in the electric motor to work alongside the brakes to slow the car – while simultaneously redirecting unused energy back to the battery. In Audi e-tron models you can pick the level of regeneration to suit your driving mood or journey type, ultimately recapturing up to 30% of your range from coasting and braking.

As a result of all this, the 82kWh battery available for the all-new Audi Q4 e-tron Sportback offers up to 323 miles of range (WLTP).

Once you’ve got the range, it’s also down to how you use it. And, in most cases we don’t actually need as much range as we think. For example, 95% of UK journeys are under 25 miles. That means, with the Audi Q4 Sportback Sport 40 e-tron’s 323-mile range, you could do 12 of these trips on one charge.

As most EV charging tends to be done while your car is parked at home or work (with the average UK car actually spending 80% of its time at home), it’s the perfect fit for slower-paced recharging as your car sits idle – also helping you reduce your driving bills if you use low-cost overnight electric rates.

For longer journeys, 300 miles is the distance from London to Carlisle: the type of trip that would take 5-7 hours and wouldn’t be done without a lunch or coffee break – giving you the perfect mid-journey halt to stretch your legs and top-up your battery. So, it’s easy to see how an Audi e-tron that boasts a more advanced battery and more range lets you fit charging around your life, rather than the other way round. 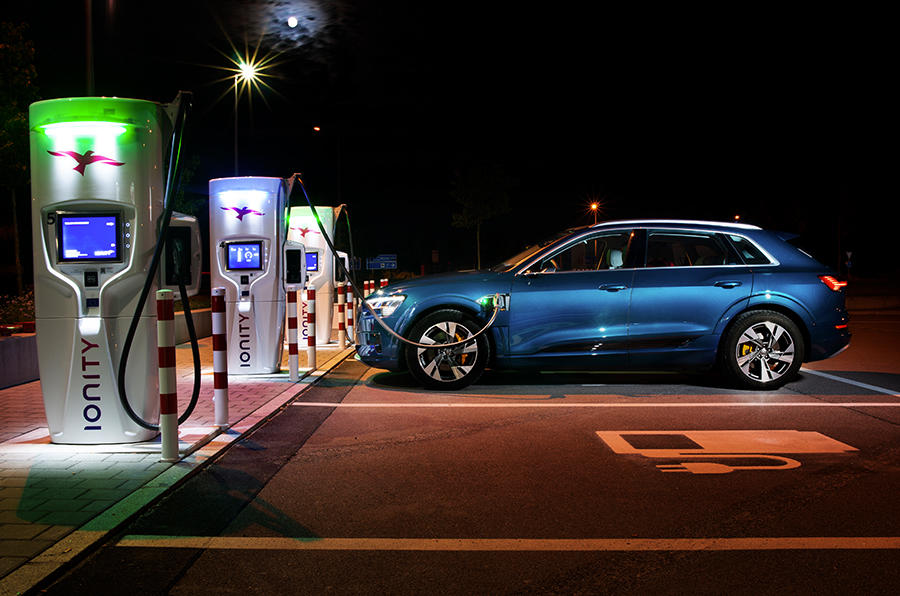 For petrol and diesel drivers used to a quick brim of the tank, the prospect of finding charging stations and incorporating charging times into a journey are natural concerns. That’s why charging speed matters.

It all comes down to the engineering under an electric car’s skin. The higher the voltage, the more ‘oomph’, and the faster power can move around. For context, traditional petrol and diesel cars use 12V batteries to power basic electrics, while more advanced plug-in hybrids use 100V-200V systems designed for slower-paced home charging or 7kW to 22kW fast public chargers.

The all-electric Audi e-tron and Audi Q4 e-tron have 400V electrical systems, letting them use rapid public chargers that can recharge up to 125kW on selected models. On the new Audi Q4 Sportback Sport 40 e-tron that lets you recharge from 5% to 80% in as little as 38 minutes, or gain 80 miles of range in as little as 10 minutes.

The Audi e-tron GT takes charging to another level. Using next-gen 800V technology and ultra-rapid charging at speeds up to 270kW, it can add up to 62 miles of range in around five minutes, or can do a 10% to 80% charge in as little as 20 minutes. That’s barely enough time to find, buy and drink a cup of coffee. 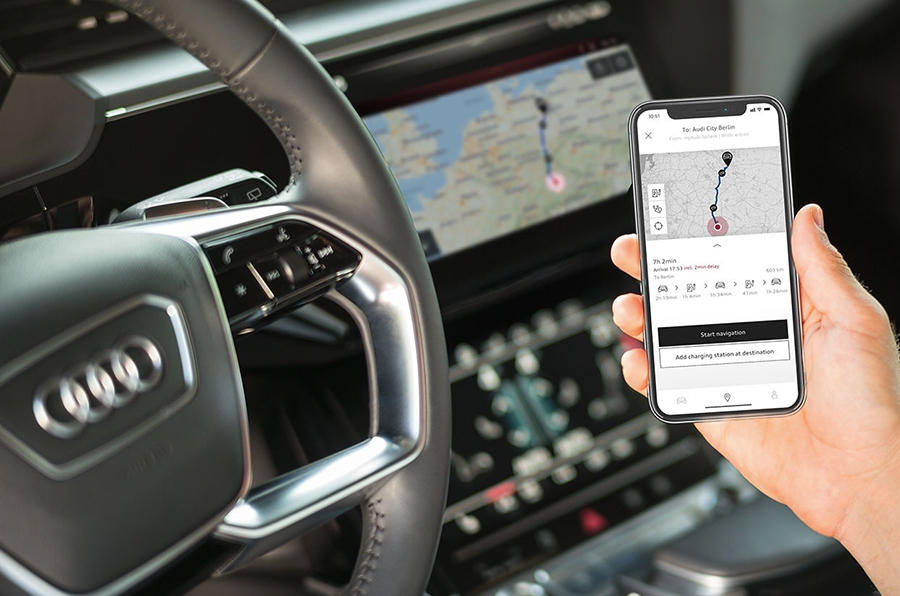 The UK’s charging network is growing fast. According to ZapMap, there are currently 26,000 charging devices at over 16,000 locations across the UK, and this is only continuing to grow. (For comparison, there are just 8,380 petrol stations). The speed of charging is also increasing, with nearly 20% of devices being rapid or ultra-rapid chargers that can deliver big boosts of range in just a few minutes.

But how do you find the right charger to match your need: whether it’s slower charging while you grab lunch, go to the gym or have a meeting, or a rapid five-minute top-up to get you on your way again?

This is where Audi’s intuitive, forward-thinking in-car navigation really comes to the fore. In Audi e-tron models, electric charging is integrated directly into the software – proactively pinpointing charging stops on your route and highlighting ones that are covered by the Audi e-tron Charging Service (see below).

Using the myAudi smartphone app, you can even plan your route and your charging stops remotely, before you get in your car. On Audi e-tron models, the myAudi app lets you remotely check your battery level and will tell you how far you can go on that charge. If you do need an on-the-go top-up, the myAudi app can help you plan your route in advance – incorporating charging stops into your route and blending it with traffic data and anticipated charge times to calculate an accurate arrival time.

If you leave your car while it’s charging, the myAudi app will notify you once you reach your charging target. Plus, as using the air-conditioning in an electric car can affect its range, you can use the myAudi app to preset the climate control to pre-warm or pre-cool the interior to the correct temperature while plugged in – ensuring that you set off with the best possible range, and a cool or cosy cabin.

Even better, if you’ve forgotten where you parked your car for charging (we’ve all done it!), the myAudi app can guide you back there on-foot. 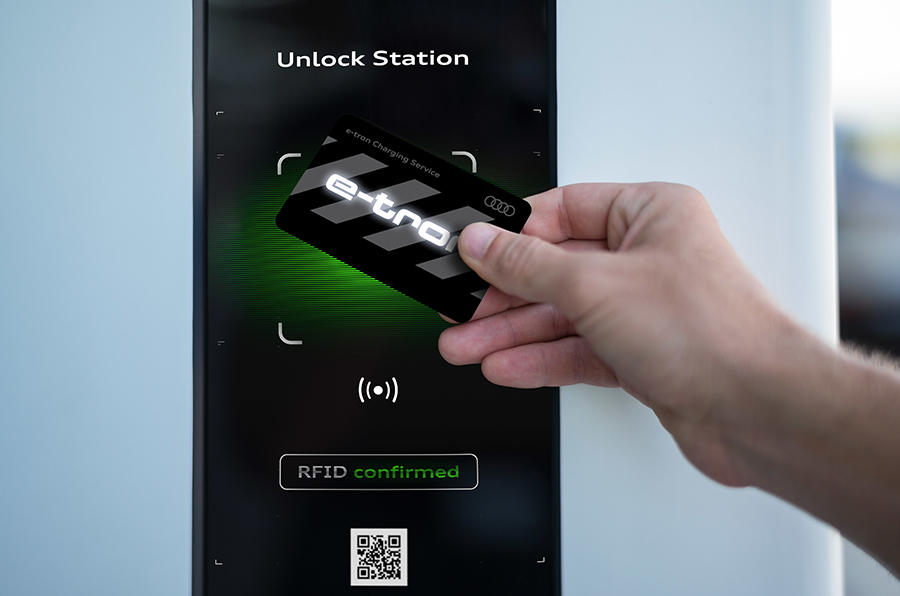 Although public chargers are getting faster, more widespread and easier to find, there are still a wealth of different charging providers to navigate, each with their own ways to pay. Some offer exclusive subscriptions; others use expensive pay-as-you-go. It’s the equivalent of having a different credit card for each supermarket chain.

That’s why Audi has made navigating the charging’s network even simpler with its e-tron Charging Service (eCS). Using one contactless RFID payment card or the myAudi app, it offers easy access to thousands of charging points from 18 providers in the UK – including major players such as Instavolt, PodPoint and Ionity.

You can choose between two simple fixed-price tariffs (flexible pay-monthly ‘City’ and 12-month annual contract ‘Transit’), that give you free-roaming access to Audi e-tron Charging Service partners. Even better, it also works in Europe. And, as all partner charging stations covered by the Audi e-tron Charging Service are integrated into the navigation systems of Audi e-tron models, you’ll be able to quickly find the right charger to fit your needs. 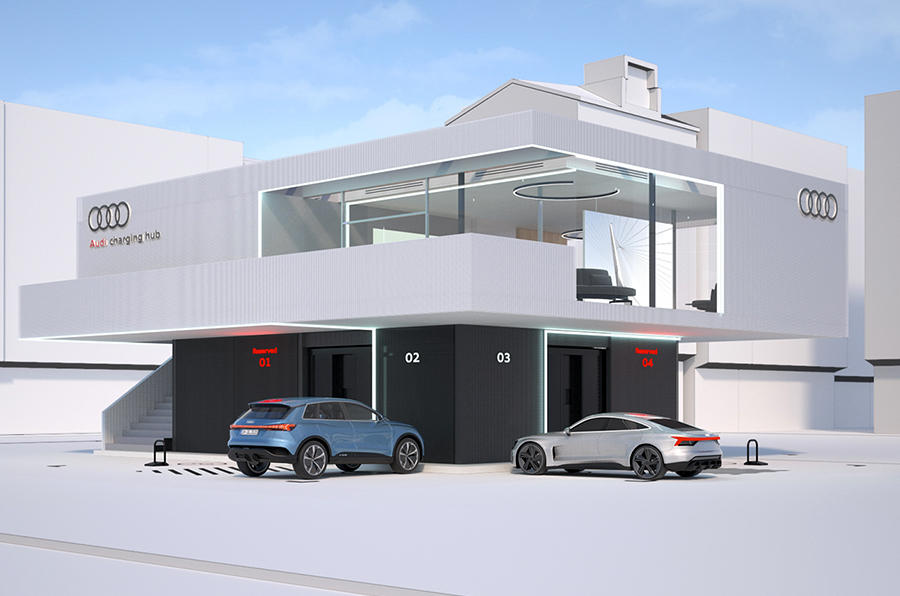 Looking to the future: Ionity chargers and lounge-style hubs

Finally, Audi is looking to the future of charging. As more all-electric models start to use more advanced 800V electrical systems, the ability to use ultra-rapid charging speeds in excess of 150kW for even faster on-the-go top-ups will only increase. That’s why Audi is a key stakeholder in Ionity: a charging provider focused on developing a larger, more widespread network of ultra-rapid charging points.

There are currently 370+ Ionity stations across Europe – with 16 key locations in the UK – and the network is continuing to grow fast. Each Ionity station boasts, on average, six charging points. Combined with charging speeds up to 350kW, it helps to get more cars plugged in, charged and moving again in quicker succession.

Audi is also rethinking the ‘petrol station of the future’, with the vision of an innovative modular lounge-style Audi charging hub. It uses second-life batteries from older electric cars for efficient local power storage – giving these batteries new recycled purpose – while also delivering ultra-rapid charging speeds. At the same time, drivers can pop to the upstairs lounge to take a break from the drive and enjoy a quick snack or coffee. Who said charging was difficult? 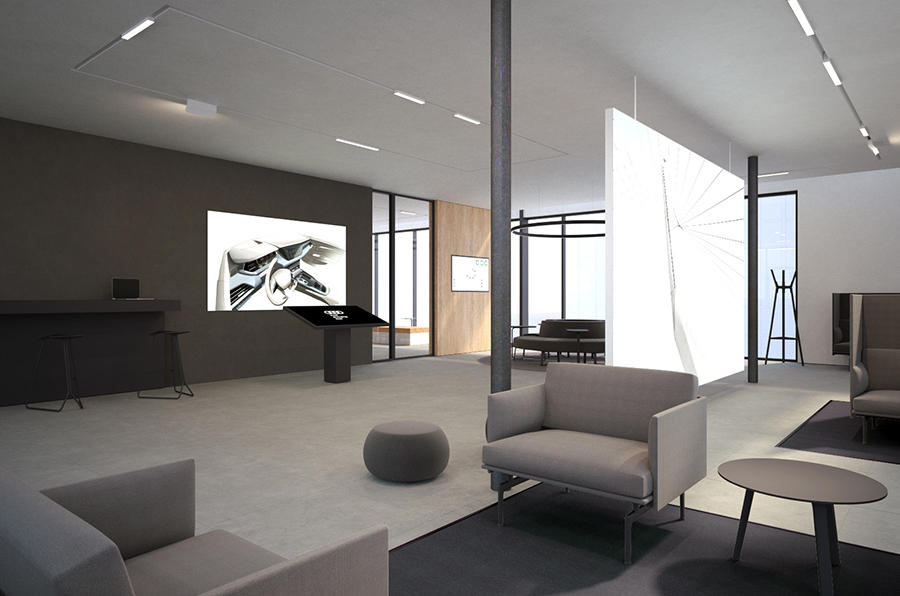 If Audi really want to make charging their cars easier they and their alter ego Porsche, should remove the charging point from the wing to the front grille. That way you wont be stretching the filthy scratchy cable (from the public charging point) around your front wing - ruining the paintwork, or having to drive forward until the bumper is virtually touching the the charger so that said cable can actually reach.

'Vorsprung durch technik' - as they say in Deutschland, although it takes a 'Englischer Architekt' to point the design fault out!