BACK TO ALL OPINION BLOGS
Currently reading: Racing Lines: Why GOAT discussions lead to plenty of bleating
UP NEXT
Opinion: Mercedes EVs will get you home on the range

Racing Lines: Why GOAT discussions lead to plenty of bleating

Fate isn’t really something that I believe in. Then again, if I didn’t know better, sometimes it almost seems that things do happen for a reason.

Had Lewis Hamilton equalled Michael Schumacher’s all-time Formula 1 win record in Russia, there’s a chance that it might have been a little underwhelming, much like the Sochi track itself. Instead, he did so at the Nürburgring, in Schumacher’s homeland and at a track where the great man scored five of his 91 victories. That was much more fitting, especially when Mick Schumacher surprised Lewis by presenting one of his father’s helmets to him. What a lovely moment. It doesn’t happen often these days, but every now and then F1 reminds us that it’s still a sport with soul.

Hamilton’s achievement in matching Schumacher’s tally of 91 victories, which surely soon he will surpass, was reached on the same day that Rafael Nadal won his 13th French Open tennis title – his 20th major. Such numbers boggle the brain, not least for those who make them. When he lined up on an F1 grid for the first time at the start of 2007, Hamilton could never have dared to dream of matching a record set only a few months earlier, when Schumacher scored his final victory in Shanghai. Yet here we are 13 years later. It’s a remarkable story.

Who is the GOAT?

In recent weeks, Hamilton’s rising tally has inevitably sparked talk of that old chestnut: the greatest of all time, or GOAT. A recent interview with Sir Jackie Stewart added fuel, with the 81-year-old saying he would find it “difficult to justify” Hamilton in such terms, whatever the numbers say, especially as his Mercedes is “so superior” that it’s “almost unfair” to the rest. More significantly, the triple F1 champion also said that it’s impossible to compare era to era, given how much the world (and motor racing) has changed through the decades. Whereas top drivers once raced not only in F1 but also in sports cars, GTs, Can-Am, Indycars and even saloons, today’s biggest stars can only specialise. But he still couldn’t resist naming Juan Manuel Fangio and Jim Clark as his choices, above Ayrton Senna. It’s so easy to get drawn in.

Stewart’s comments were taken by some as a bit of dig at Hamilton, and perhaps they were. These great champions certainly haven’t always seen eye to eye. But his point that comparisons are impossible is really the key. GOAT talk is fatuous when it comes to motor racing, as far as I’m concerned – in fact, I would argue so for any sport. Context and technology – even with tennis rackets! – change so dramatically through the decades, all too obviously in the case of F1. All you can really do is pinpoint the greatest of each generation and leave it there.

For what it’s worth, in the World Championship era from 1950, my chronological F1 list would read: Fangio, Sir Stirling Moss, Clark, Stewart, Niki Lauda, Alain Prost, Senna, Schumacher… and now Hamilton. Lewis absolutely deserves his place among such company. 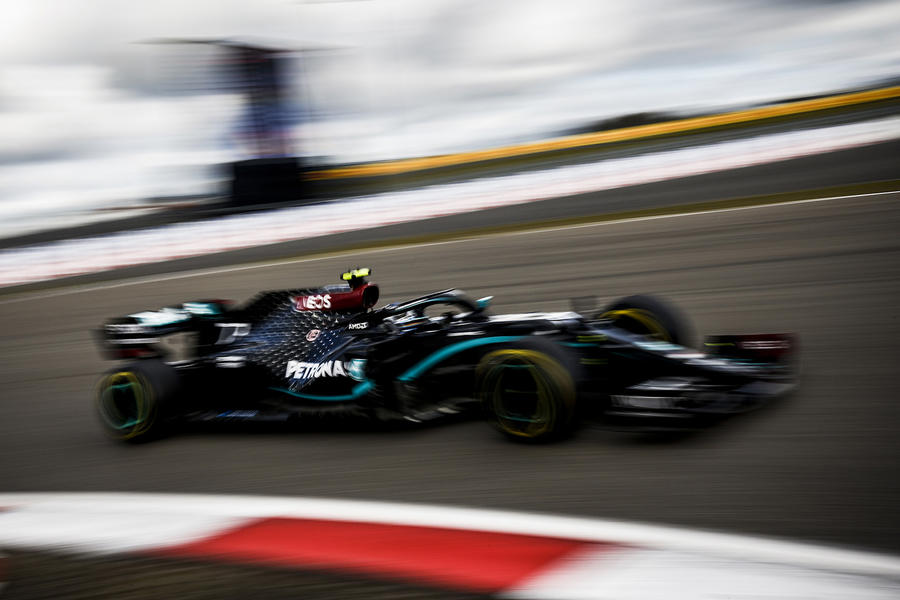 Then again, one statistic mentioned in Germany was Hamilton’s rise in the wins percentage table. Fangio always tops this one, with 24 wins from just 51 starts (46.2%), Alberto Ascari is next with 13 wins from 32 (39.4%) – and now Hamilton edges past Clark with 91 from 261 (34.9%). Sir Jackie would say that’s the car superiority, but then Fangio and Ascari always drove the best, too… I know, I’m getting drawn in. Let’s leave it there!

No matter how many race wins and titles he racks up, Hamilton will always remain divisive – especially, it seems, among older generations, many of whom resent everything from his dress sense and lifestyle to his defiant campaigning against racism. Don’t mix politics and sport, they say. Bigotry and prejudice isn’t politics, responds the other side, who admire Hamilton for taking a stand on basic human rights. You will have your own view.

What is irrefutable is Hamilton’s commitment to something that’s barely acknowledged by too many in motorsport. This summer, he set up the Hamilton Commission in collaboration with the Royal Academy of Engineering “to identify the key barriers to recruitment and progression of black people in UK motorsport and provide actionable recommendations to overcome them”. A non-issue? As Lewis’s brother Nicolas pointed out to us, how many minorities do we see in UK paddocks? And after Lewis retires, who will follow him?

Ex-McLaren F1 team boss Martin Whitmarsh (who offers us some insight into Hamilton’s progression from karting prodigy to world champion here) was invited by Lewis to join the commission, and he was pleased to accept.

“We’ve only just started, but I’m doing it because I want to learn,” he says. “I’m honoured to be white, middle-aged and male sitting on a commission looking at this issue! It’s important to me that Lewis gives his time and attention to it. He’s very sincere, and I think it’s a good thing to be happening in the sport. Not necessarily everyone agrees, but this is a serious project. 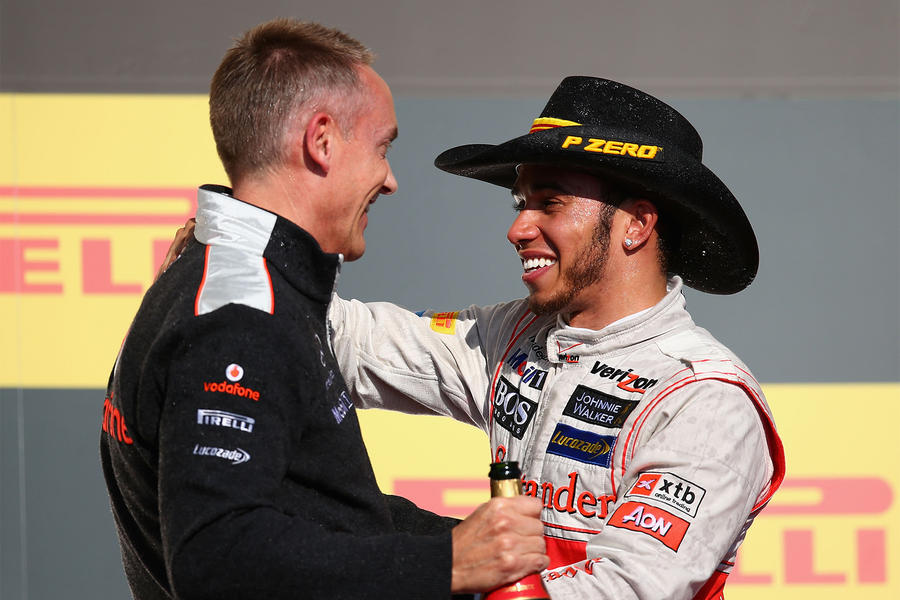 “I had the honour, 13 years ago, of standing on the podium when Lewis became the first black driver to win in F1. But it hasn’t been the transformation we expected. He’s at the pinnacle but hasn’t been the catalyst for the change we perhaps thought might follow, and that’s what we have to look at.”

As Whitmarsh readily acknowledges, Hamilton is far from perfect. “He does make mistakes, he is human,” he says. “But he’s also a very brave and sincere individual. Until now, I had never really thought about racism and obviously haven’t experienced it. Lewis has.”

I would add that he still does. He’s a true champion in every sense, and we’re lucky to have him.

You could debate this till whenever, we all have our ways of measuring up things, a person, incidentally, this is the first time in a while that F1 has been discussed, anyway, yes, he's the best just now, I'm also glad to see the next generation coming through who might one day be as good. F1 is money driven sport, you have to get backers, sponsors to help fund your dream of being the best, your ethnicity shouldn't be a discussed factor, what color got to do with talent?, we're all human, and, I think that's more important, and that's the last bit of racism I'll refer to. To get a, or should I say my idea of a great driver, today's F1 stars should be good in what ever motorsport they like, Kimi I think and Kubica, are of the top of my head, who have done another motorsport namely Rallying, neither did anything of note other than do serious damage to there Arm, so saying Hamilton is the best just isn't correct.

Basically, Lewis kicked everyone's arse in everything he raced, up to and including F1. His first F1 test had him going quicker than the then-current racing drivers, first time out. He is, and always has been amongst the best in the wet. He has often appeared to have had a lot of fun racing in cars which were genuinely hard to drive, either through being a bad car or actually being damaged/broken. Everyone said he'd never be able to look after the Pirelli tyres well enough, but he always has done, the only exception being during his first season at Mercedes when the car was simply terrible. Everything people have said he won't be able to do has turned into a reality of high achievement. The idea that he's only winning so much due to the car is obviously true, he wouldn't be winning so much in a Sauber/Alfa, but it must also be said that the car doesn't drive itself, the fastest car is only the fastest when it has a fast driver, and the fastest car hasn't always won the championship. He's now the second oldest driver on the grid, Kimi is oldest, and yet he hasn't begun to slow down, he speed is compared favourably to the best of the youngsters. He used to catch Nico while using less fuel, and making his tyres last longer. Who makes less mistakes? Who performs with so much consistency? These are things Lotus engineers say about Jim Clark - he used less rubber, less fuel, the brakes lasted longer, went faster, and made less mistakes - there is no way you can say Lewis isn't deserving of a top tier place in motorsport history. He certainly has a lot of anti-fans, a group which looks to mostly consist of fans of other drivers who suddenly didn't appear to be all that good, or people who watch with their eyes wide shut. Oh, and jealous drivers who won't admit to knowing they aren't - and never were - as good.

I think you can compare

I think you can compare drivers of different era's because you can compare their achievements. All successful drivers succeeded in the best cars, however that doesn't mean there aren't great drivers out there in lesser cars. I always like Button, but he often had no luck or unreliable machinery.

Hamilton is definitely a consideration for GOAT, he is an incredible driver, who, I agree with others here, has excellent race craft and hasn't forced others dangerously off the road.

As for the Racism angle, he is in a position to make himself heard, so why shouldn't he use his platform for a cause he believes in, maybe there aren't enough opportunities for people of colour in F1, I wouldn't know, but as he himself said, there are lots of people of colour in football. Does this just point to the fact that F1 isn't as popular as he may think?

As some have said F1 is a rich persons sport, but again Hamilton beats the odds as he didn't come from a wealthy family, his dad worked several jobs to afford his karting until I believe McLaren picked him up in their driver scheme.

So to summarise, I don't think it's right of Jackie Stewart to imply Hamilton has only achieved what he has because of the car, and whilst there have been other drivers of colour in F1 as jonboy rightly points out, that Hamilton believes there should be more opportunities and is in a position to make a difference, then why shouldn't he try. As for the end racism T shirts, it's a political statement that does need saying, even if I don't agree with Hamilton's wearing of the Black lives matter shirt, as that, I feel, is a political group, as opposed to a statement.