BACK TO ALL OPINION BLOGS
Currently reading: Silly car names No 8: the BMW X5 xDrive30d M Sport
UP NEXT
Opinion: Why Rally GB mustn’t be lost

BMW’s latest X5 xDrive may have one of the clumsier car names of the moment, but in the past there have been some absolute corkers
Share
Close
Share story

There are some fairly crazy car names at the moment; Mercedes A250 engineered by AMG, BMW X5 xDrive30d M Sport are just two that spring to mind. But don't think for a moment that new cars have a monopoly on odd names, even if they are often much, much longer. Here are some of my favourites from the annals of history.

The Isuzu GIGA 20 Light Dump – a small truck from Isuzu that really could have done with the word 'truck' being used at the end of its title. Not to be confused with the altogether more pungent Mazda Titan Dump.

The AMC Gremlin – how do you ever manage to sign off, so to speak, on a name like that?

Subaru Brat – a coupe from Subaru whose name is an acronym that stands for B-drive Recreational All-terrain Transporter.

Mitsubishi Pajero – which mean Mitsubishi w****r in Spanish, otherwise known as the Shogun.

Honda That’s – a Japanese mini-suv that might well have benefited from an ellipsis at the end of its name.

Toyota Deliboy – so near yet so far from being the ultimate van name for those who live in Peckham.

Suzuki Every Joypop Turbo – a small turbocharged van from Japan.

Daihatsu Scat – a compact and rather mucky off-roader.

And of course not forgetting the Mazda Carol Me Lady – a special-edition supermini from Mazda.

Most of which make the BMW X5 xDrive30d M Sport seem, well, almost boring by comparison.

You know what comes next: anyone got any more car names that make the latest X5’s seem sensible (it is the last day of summer and it’s been a long week, after all)? 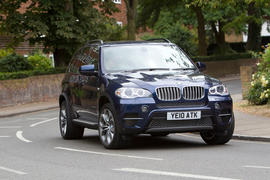 The Nissan "Cedric" and the Toyota MR2, which is Toyota "shitty" in french.

Surely the Mitsubishi Carisma is worth a mention as it had about as much charisma as one of my toenails. Let me tell you my toenails are a charisma-free zone.