BACK TO ALL OPINION BLOGS
Currently reading: Diesel power is on a downward slope
UP NEXT
Opinion: Why Rally GB mustn’t be lost

Diesel power is on a downward slope

After more than one and a half decades of increasing domination, diesel is now a fuel on the back foot
Share
Close
Share story

For diesel, 2014 wasn't the best of years. This fuel has had a bull run since the late 1990s, when the first generation of direct-injection turbocharged engines began appearing.

I have fond memories of spending the 1998 Christmas holidays in a 150bhp Mk4 Volkswagen Golf TDI. On Boxing Day that year, I drove from Hertfordshire to Norfolk in convoy with a first-generation Audi S4 Avant. On the slingshot roundabouts of the A11, the mighty turbocharged petrol Audi had some trouble keeping up with the exit speed of the diminutive Golf.

This VW seemed to be the future: light on its feet, well packaged and with the kind of mid-range acceleration that left most regular ‘performance’ cars struggling. Indeed, such was the Golf’s mountainous torque curve that it was not beyond losing traction in third gear.

After the turn of the century, it looked like diesel would become the dominant fuel as national and transnational governments decided to heavily tilt car taxation towards lower CO2 emissions. It looked like a win-win situation. Diesel drivers were getting both swift real-world performance and impressive fuel economy.

Today, however, diesel power looks like it is fast heading towards the automotive exit. In 2014 the media finally cottoned on to the problems of urban air pollution, the majority of which can be blamed on diesel engines.

After a decade of CO2 being described as ‘pollution’, 2014 saw the rapid switch to a general understanding among the media that it is tiny particulates and nitrogen oxides that are damaging to human health, not CO2.

The diesel ownership proposition is also starting to come apart. Modern diesel cars are packed with expensive technology, which can go expensively wrong. Dual-mass flywheels give up and particulate traps can get choked and die in the UK’s heavy traffic. High-pressure diesel fuel pumps are also very expensive to replace.

Heavy diesel users – such as minicab drivers – are finding that the latest anti-pollution diesel engineering is also proving troublesome. Exhaust recirculation systems are choking engines on their own emissions. And as EU emissions regulations become more stringent, the cost of building diesel engines is rising significantly.

Perhaps the most worrying issue is that diesel engines clearly start to pollute on a grand scale as they age. Some of this is down to worn fuel injectors (which is why Volvo’s computer-controlled Denso injectors are such a great leap forward) and some of it is due to mechanical deterioration that is not yet well enough understood.

In the real world of working vehicles, the shift from diesel is already under way. The streets of the capital are thick with hybrid minicabs being run by private drivers. The Toyota Prius dominates, of course, but I would also guess that virtually all of the Honda Insights sold in the UK have now been pressed into service on London’s roads.

And why not? I borrowed an Insight over the summer and found it ideal for urban driving. The transmission was smooth (especially the start-stop system) and it was nippy enough. It made for a relaxing car on the urban grind. It was, however, completely out of its depth on motorways, buffeted by the diesel road trains of company cars.

But that’s of no concern to minicabbers who want a long-term reliable petrol-powered car that emits an absolute minimum of pollutants out of its tailpipe. 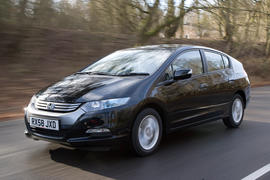 I sense that for smaller cars which spend a reasonable amount of time in urban conditions, we’ve had our fun. For long-distance running at motorway speeds, diesel will still be an effective fuel. For everything else, the new-generation petrol-powered cars are the future.

They may not be as economical, but they are far less polluting in the longer run, relatively less complex and probably more enjoyable. After 15 years, petrol power is back.

Petrol cars experienced the same dilemma in the 70s with the anti smog legislation in the US. Technological advances in fuel and exhaust treatment largely negated the problem.
New Legislation and technological advances are already occurring with the Euro 6 standard which reduces nitrous oxide emissions by 50 percent for example.
typos1 9 January 2015

The diesel wont die, we cant

The diesel wont die, we cant live without em. The probelm with diesel emissions is that the EU has not regulated dthem as striclty as petrols - this is easily rectified by enforcing Californian diesel emissions regs, making NOx traps and DPFs mandatory and a programme to retro fit them (scrapping perfectly good cars IS NOT good for the environment). Without diesels we cant meet our CO2 targets. Suggesting that "modern diesel cars are packed with expensive technology" is misleading because so are petrols. Petrols have complex 3 way cat systems (also very expensive to replace) that diesels lack (needing only 1 way cats and a DPF), making NOx traps and DPFs mandatory wouild simply put diesels on a par with petrols, giving them complex emissions systems. Diesel sales in the US are slowly and steadily increasing. This article has not been thought through propely.
freethinker 9 January 2015

Why is it that the proportion of diesel cars sold is expanding very fast in the US and that ALL german manufacturers support this technology (and they are not alone, by far) ?
View all comments (16)