From £31,3597
Hybrid-only fifth-generation RAV4 finds itself in a niche class. We put the striking new D-SUV to the test
Open gallery
Close

It’s undoubtedly poor form to judge a book by its cover. But after casting your eyes over this new fifth-generation Toyota RAV4, you’d be hard-pressed to deny that company boss Akio Toyoda’s goal of making Toyota great again is gathering a serious amount of momentum.

Admittedly, a D-segment, family-oriented SUV such as this is never going to capture the imagination of red-blooded driving enthusiasts in quite the same way the Toyota GT86, Toyota Yaris GRMN and recently revealed Toyota GR Supra might. But from a design perspective, the new RAV4 certainly does some serious damage to the increasingly fading stereotype that Toyota is a purveyor of boring, forgettable cars.

Just as with its smaller sibling, the CH-R, describing the new RAV4’s overall aesthetic as ‘divisive’ is far from an unfair call; there will undoubtedly be those who find the SUV’s bold new image distasteful. There will also be those who, like me, really rather like its staunch, angular new look. Those square wheel arches - à la anything with a Jeep badge on its nose - are a particular highlight.

Of course, this striking new image brings with it a handful of dimensional alterations too. The RAV4’s roofline is now 10mm closer to the ground, and its wheelbase has been stretched by 30mm, too, with a view to increasing rear leg room. Its body is stiffer than that of its predecessor, while its centre of gravity is also lower down - which should bode well for the way in which it handles the twisty stuff.

Central to all of this is Toyota’s shiny new TNGA GA-K platform. The RAV4 is the first Toyota to be launched on this architecture, although the Lexus ES also sits on this same foundation. Suspension is by way of MacPherson struts up front, while a double wishbone arrangement is used at the rear.

In a similar vein to Honda and its Honda CR-V, diesel power has vanished without a trace. Unlike the CR-V - which can be had with a regular petrol engine - the RAV4 is hybrid only in the UK.

Central to this powertrain is a 2.5-litre, naturally aspirated four-cylinder petrol engine. In our front-wheel-drive test car, this was paired with a CVT and an electric motor for a combined system output of 215bhp. All-wheel-drive models gain a second electric motor at the rear, which lifts total poke to 219bhp. 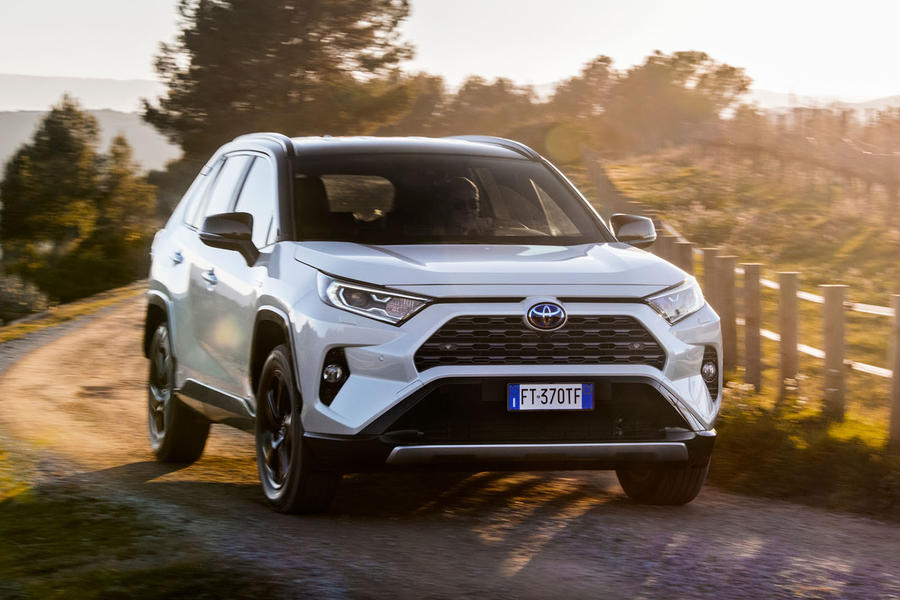 From the driver’s seat, largely spot on. The design language adopted in the cabin may not be quite anywhere near as daring as that of the exterior, but you won’t feel short-changed so far as build or material quality are concerned.

Ergonomics are sound, too. Masses of adjustability in the driver’s seat and steering column make getting comfy behind the wheel easy, and you’d have to be in particularly poor shape to find the act of reaching for the HVAC controls taxing. There’s also loads of room in the second row. The infotainment suite is pretty rubbish, though, and unless you’re a fan of puzzles and retro graphics, I’d hazard a guess you won’t exactly warm to it. That Apple CarPlay and Android Auto compatibility aren’t available even as options acts as further salt in the proverbial wound.

On the move, the RAV4 goes about the business of being a family-friendly wagon in a perfectly commendable fashion. There’s enough suppleness about the manner in which it deals with lumpier stretches of Tarmac to comfortably label it a comfortable steer, but I don’t think you could quite stretch that to outstanding - it never really feels as though it's truly in tune with the topography of the road underfoot. Secondary intrusions have a tendency to make their presence known, too.

Tip it into a bend and it stays impressively flat - evidence that the lower centre of gravity afforded by the new GA-K platform is paying dividends - while the firm but comfortable seats do a good job of holding you in place. The steering feels suitably weighted and usefully quick, and doesn’t give any cause for concern about an inherent unwillingness to change direction. There could be a dash more front-end grip, yes, and the stability systems could chime in with a fraction less severity when you begin to stray past the limit, but your average RAV4 buyer probably won’t venture anywhere near the edge.

That hybrid powertrain is usefully potent and is more than capable of dispatching overtakes with little bother, and the electric motor masks the naturally aspirated engine’s relative lack of low-down shove in tidy fashion, too. The CVT’s tendency to aggressively flare the engine’s revs every time you accelerate might grate with some - particularly as the engine is quite vocal at the top end - but adopting a more relaxed driving style goes a good way to mitigating this. Around town, it makes for smooth progress, particularly when running on electricity alone. 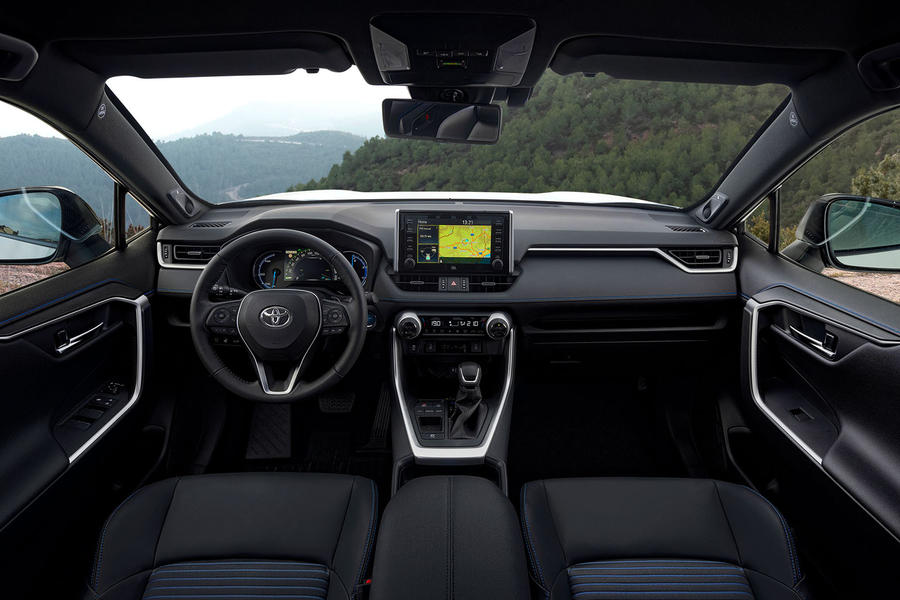 With prices starting at £29,635, the latest RAV4 doesn’t sound particularly cheap, especially when you could drive off in a new Skoda Kodiaq for considerably less. At the same time, though, it’s well equipped, and as a hybrid D-segment SUV, the RAV4 finds itself in an incredibly small class. Its only real rival is the hybrid version of the Honda CR-V, a car that doesn’t look as good, isn’t quite as quick as the Toyota and is only a few hundred pounds cheaper.

The RAV4 is a bit of a niche choice, then. Toyota reckons it’ll sell about 9300 or so in the UK this year, and I’ve no reason to believe that those people who fork out for one will sorely regret doing so. After all, they’ll be getting themselves a good-looking, comfortable and usefully sure-footed SUV with a big boot (580 litres) that’ll easily take any task a family throws at it in its stride. And that’s no bad thing. 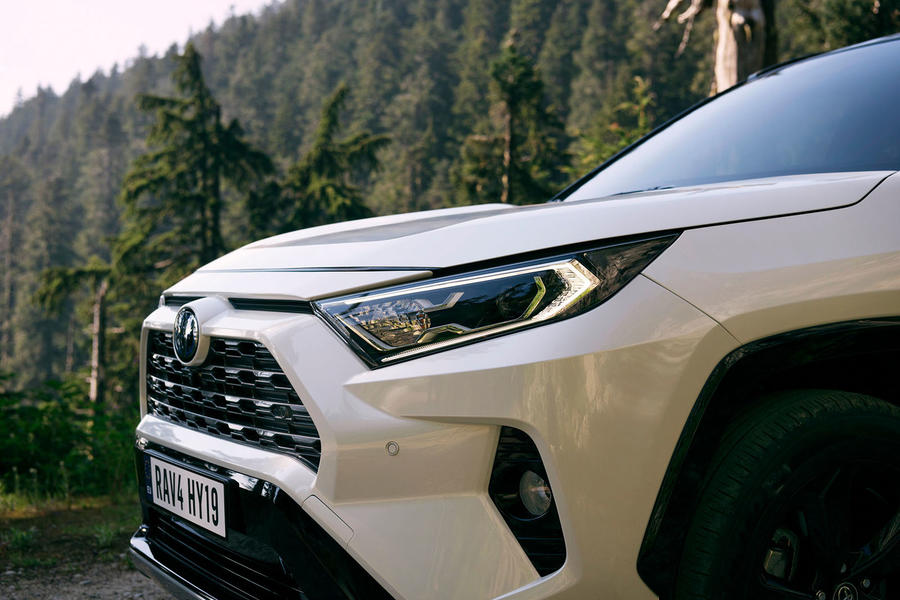 A month of enjoying this motor, my first new car for nearly 7 years. Three VW Touaregs preceded it, but the new Touareg is a boulavardier, swollen beyong the width of my driveway gates and still a polluting diesel. Your reviewers continue to compare the RAV 4 with 'diseasels' as Rev. Awdry called them many years ago, and RAV4 remains one of the few genuine four wheel drive hybrid off-road motors with very low emissions.

I have been pleasantly surprised by how much like my previous Touareg it is to drive. Much better fuel consumption of course. Over 600 miles it has consistently achieved over 51 to the gallon, reaching  55 mpg on one trip with 5 in the car, although mileage has been over the downs on country roads and around town. Of course it outperforms the Touareg on acceleration, roadholding is as good and it is quiet - uncannily so when running just on electric power. Gear changes are non existant, and it can be a ittle disconcerting to be doing 55 with no engine noise as the electric power pushes you on.

Interior space is good, visibility excellent. Seats are not as luxuruious as I'm used to but are still very comfortable, holding me well when I push it fast along the winding coast road. The engine 'roar' your critics write of comes only if very heavy footed, and because of the electric motors this is not where the best acceleration comes. Again engine noise is comparable to my old Touareg. only road noise not being quite as well damped.

The sound system is good, my limited testing of the sat nav shows it to be an improvement on my previous VW system with turns not just appearing on the large well positioned screen, but also between the speed dial in front of the steering wheel.I look forward to using it on the Continent. The sytem connected to my phone and my partners too, making me not just her chaffeur but her secretary too...

I haven't run a proper test of the 'trail' system yet, having tried it only on a short section of rough track which it coped with adequately. The 'eco'mode is interesting teaching a drivng style that whilst rapid maximises the use of the electric motors  and 'marks' your driving style according to how eco friendly it is. Sport mode is as irrelevant as the similar setting was on the Touareg

All in all I am delighted with the car. My last Touareg disappointed as VW took it away from its 4x4 origins chasing the luxuy saloon market. I had 3  and each became less masculine, more anodyne. The RAV 4 has gven me back something I missed, a challenge with the Eco systems, the sense of adventures with its more direct approach to being a 4x4. Luvvit

My 3 month old Honda CR-V 1.5L petrol had an ECU issues and is still off the road despite it being replaced by the dealer. Honda UK has advised me not to drive the car in case the ECU fails again. I test drove the new hybrid Toyota RAV4 Hybrid two days ago and really liked it: the power, large boot, larger infotainment screen than the CR-V and the functionality of the controls. However, Honda UK has offered to replace my 1.5L petrol CR-V with a brand new CR-B Hybrid of the same spec for no charge to me, so I've sadly decided to pass on the Toyota, which was going to set me back an extrs £3,000.

All the design and engineering.......

and then they make a mess of the connectivity with Mobile ..... No Carplay really.  Toyota- Always a better way ...... and it does not say Bluetooth on it.