From £10,4905
In an urban environment, the Smart Forfour Brabus has some appeal. However, on the open road, you soon learn that it's no hot hatchback
Open gallery
Close

Do you remember the first generation Smart Forfour Brabus? It was launched back in 2005 and was the fastest ever production Smart thanks to a 1.5-litre four pot that ran sufficient boost to generate 174bhp – enough for some rampant torque steer.

After a long hiatus, the Fourfour Brabus is back. Unlike its front-drive predecessor, this is rear engine and rear drive like every other Smart. Its 898cc three-pot kicks out 108bhp and drives exclusively through a six-speed dual clutch automatic ‘box.

If that sounds familiar, that’s because it’s the same mechanical makeup that underpins the Renault Twingo GT. No surprise as the cars were developed together and are built in the same factory in Slovenia. Can the Brabus impress more than the underwhelming Renault? 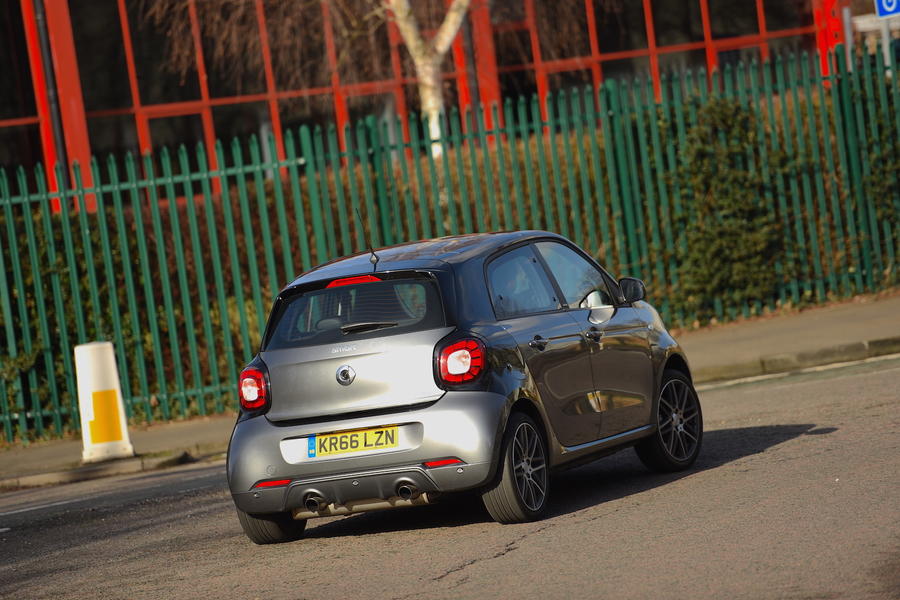 The Fourfor Brabus may be a tiny car - it’s shorter than a VW Up - but it tips the scales at nearly 1100kg, a good chunk more than the Fortwo. That means performance that’s fairly tepid. The 0-62mph dash takes 10.5sec which is more than half a second longer than the turbocharged Up. That said, it’s enough for it to feel nippy around town, and it does make a fruity rasp from its twin tailpipes. Indeed, it’s well suited to city life thanks to the narrow body and hilariously small turning circle that allows you to pull u-turns in all but the tightest of streets.

That may sound great, but the chunky alloy wheels don’t do the ride any favours at all. Go down a typical potholed UK road and you’ll find yourself jostled this way and that, a sensation that’s amplified by the lofty driving position. The ride does calm down at higher speeds, but you then face another issue – crosswinds. With a gust, you’ll find yourself having to make plenty of minor corrections even with the ESC nipping brakes to try and keep you on the straight and narrow on the motorway. This becomes tiresome very quickly.

So what about cornering? There’s certainly a lot of mechanical grip, enough to surprise plenty of lower-slung machinery. It also feels a lot more stable than the Forfour while still diving into turns thanks to quick steering. You don’t have to push too hard to find the ESC cutting in aggressively to stop it getting too out of shape, though. 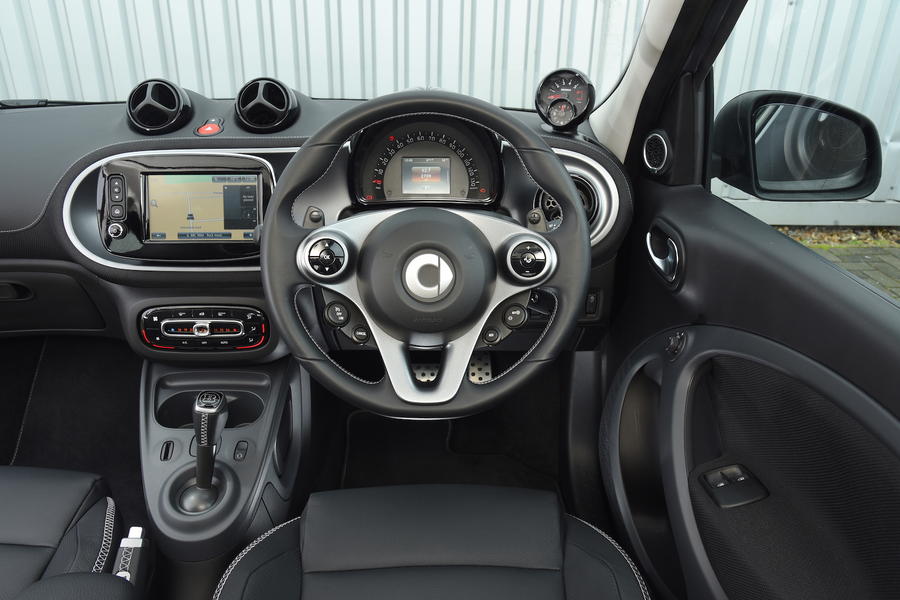 Throw in plenty of body lean and steering that isn’t particularly communicative, and you’ve got a car that isn’t really that enjoyable to drive quickly. The gearbox doesn’t help, either: it may be a huge step on from the old automated manual, but shifts still feel ponderous and it’s easy to confuse it.

As this is an Xclusive model, you get leather seats, a leather-look dashboard topper, a 7.0in infotainment system with sat nav and a DAB radio, a reversing camera plus auto lights and wipers. That sounds generous until you realise that this is £15 shy of £20,000. I’ll repeat that. Twenty thousand pounds.

That brings us to the Smart’s biggest issue. For that money you could get a proper hot hatch such as a Ford Fiesta ST. If you want something a bit more premium, a Mini Cooper 5-door is cheaper and still loads faster than the Smart. It’s not like it feels that plush inside, either. There may be the aforementioned leathery bits, but there’s also lots of hard plastic and an infotainment system that looks like it’s been lifted straight out of a Renault. Probably because it has.

As you may have guessed by now, we can think of much better ways to spend the asking price of the Smart Forfour Brabus. Even if you avoid the luxuries of Xclusive trim, you’re still spending around £17,000.

At the end of the day, if you’re after a hot hatch, there are much better alternatives out there. If you really do want the Smart, then save yourself several thousand pounds and buy the Renault Twingo GT instead. True, it's also a distinctly average driver's car, but at least you’re not wasting quite so much money.

What does Brabus think it can

What does Brabus think it can offer that Mercedes and Mercedes-AMG cannot?
Daniel Joseph 24 February 2017

Couldn't agree more. What a way to blow £20K! As the reviewer says, MINI Cooper or Fiesta ST would be an infinitely better bet at this budget. It's sometimes said that there aren't any truly bad cars made anymore, but this comes close, nor least for the sheer cynicism of its manufacturer in bringing such an inept car to market.
View all comments (4)