It might be tiny, but the Citigo-e is a pretty big deal for Skoda, being the firm’s first fully electric production model to hit showrooms.

It’s also the only version of the Citigo you can buy now – the city car lost its buzzy three-cylinder petrol options as part of an update last year – and is based on the electric Volkswagen e-Up, alongside the identical Seat Mii Electric.

But what matters most, and what is most likely to ensure success for Skoda’s smallest model, is that it is currently among the very cheapest electric cars available in the UK, undercutting not just its sibling cars but also the Renault Zoe, MG ZS EV and new Vauxhall Corsa-e by some margin.

It’s still not what you’d call cheap, as is the way with these early-adopter EVs. Prices for the Citigo-e iV SE start from £16,955 after the government’s £3500 plug-in car grant is applied, meaning it costs nearly twice as much as the cheapest version of the old car. And it’s not as if there’s an abundance of added extras, either. Although electric windows and DAB radio are standard fitments, heated seats and parking sensors add £400 to the list price and even a manual seat height adjuster is a £70 extra.

Range-topping SE L trim bumps the price up to £19,315 – bringing the Citigo into line with the £19,300 Mii Electric – and brings with it new colour options, sporty alloy wheels and a bespoke interior design. Also included at this level is a Type 2 on-board charger capable of charging at up to 60kW, which allows the battery to be refilled from zero to 80% in an hour. 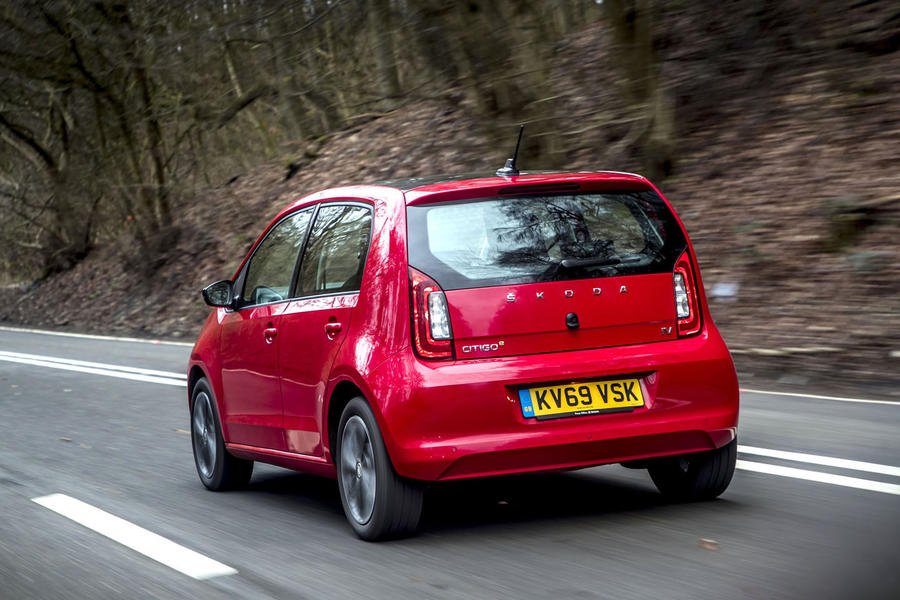 In many senses, the Citigo-e iV is much like its petrol-powered predecessor. You still open the fuel filler cap to top up (albeit with a charging cable rather than a pump), turn a key in an ignition barrel and release a manual handbrake to set off. Owners of the outgoing car will not have to dramatically adapt their perception of driving if making the switch.

In fact, you’d be forgiven for not immediately recognising this as a new car. Despite the Citigo’s not insignificant reinvention, it retains the same wheels-in-the-corners stance and short, squat profile as its predecessor. The only real difference is the blanked-off front grille – a feature of most electric cars based on existing combustion-fuelled models – and the rev counter making way for a power usage indicator.

As with the exterior, the interior has been left largely untouched, making use of the same minimalist, almost utilitarian layout that made the previous iteration so charming. There’s an adjustable smartphone mount in place of an integrated touchscreen and smartphone connectivity compensates for features found on more premium cars. The infotainment system, operated using Volkswagen Group buttons and switches that are characteristically satisfying to twiddle, is pleasingly intuitive, if a little rudimentary.

Obviously, range will be an issue for some, and at 161 miles, the Citigo will certainly not suit all commutes. The battery will be quickly exhausted by motorway jaunts (admittedly not this car’s party trick in any sense) but we did notice that liberal use of the accelerator, even in town, could cause the car to lose 25% of its charge over as little as 20 miles.

Equally, although the Citigo’s 0-62mph time of 12.3sec is well beyond what would traditionally be considered reasonable for a conventional city car, its 81mph top speed will hardly set the world alight. But then again, this car has been so obviously conceived and designed to make life easier for urban drivers.

And indeed, that’s where this latest generation of the Citigo, more than any that have gone before, truly excels. A 9.8m turning circle gives it better low-speed manoeuvrability than almost anything this side of a moped and its narrow frame will encourage drivers to aim for parking spaces and gaps in traffic that simply wouldn’t be considered in even a Ford Fiesta or VW Polo. Its keenness to get up to speed is a boon here as well; albeit perhaps exaggerated by how little distance there is between your backside and the blacktop.

Although poise and agility are unlikely to be near the top of the list of must-haves for prospective city car buyers, the Citigo doesn’t fail to elicit a smile in tight, twisty environments. Even at sub-30mph speeds, the car’s short wheelbase and overhangs lend a real degree of engagement to the handling characteristics, while the near-200kg weight gain brought about by the underfloor batteries has done little to adversely affect its ability to take speed bumps and potholes in its stride.

Our test car had 16in alloy wheels rather than the 14in steel items that are standard fitment for entry-level SE trim and they massively enhance the Citigo’s visual appeal without sacrificing too much tyre sidewall. 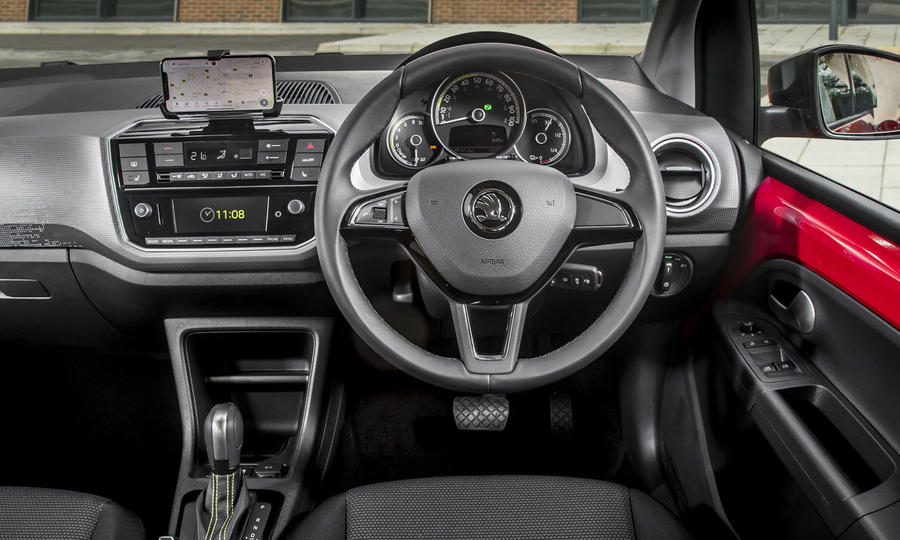 The Citigo-e iV could well be the least disruptive means of making the switch away from combustion. It’s fun to drive, well built and stylish – much like its identical forebear – and remains overwhelmingly easy to use every day.

Your options are limited at this price point, for the time being at least, if you want a usable electric city car, which serves to make it all the more attractive. It might not be the best equipped in its class, nor the most powerful or long legged, but the range is perfectly fine for daily life and its peppiness more than makes up for a faint lack of refinement.

Yes, its Seat and VW siblings add a little more badge appeal into the bargain, but at what cost? Well, around £2500. And if you just want something fun and frugal to take you to work and back, that’s money you really don’t need to be spending. Pick the Skoda. 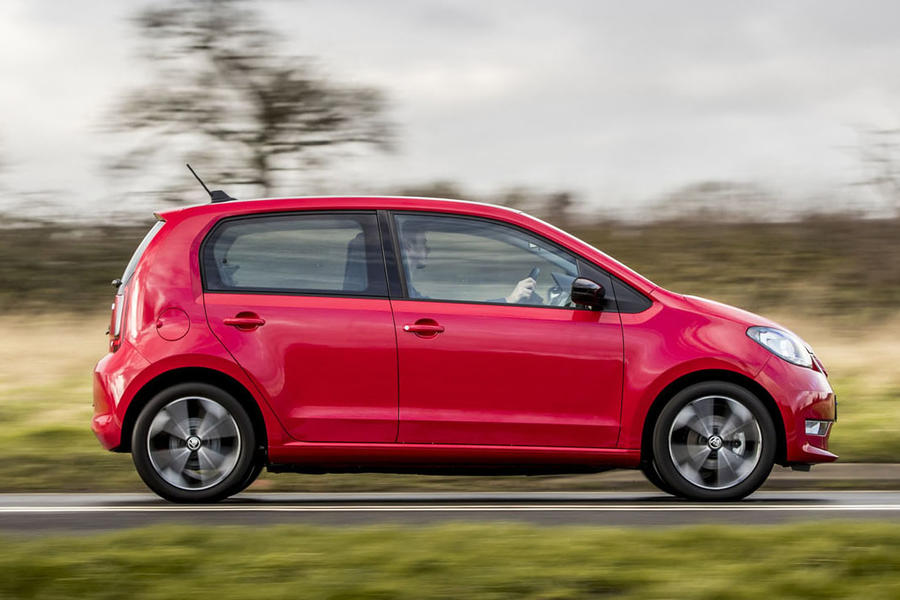 Well while it's VW and seat

27 February 2020
Well while it's VW and seat siblings are more expensive as a starter they are better equipped and come with the higher capacity fast charger as well, so whilst this does seem really good value it actually appears no different once you add the stuff you'd want/ need, still, the range is actually quite good at 161 miles though losing 25% over 20 miles so easily is a concern as that's more like 12.5% of its range, so you are pretty much halving its range.

... but most new car *buyers* are seemingly looking for more size - even a Fiesta looks bloated by comparison. I have a petrol version and it's like a modern Austin 7 (small yet big enough, handles well, etc). Kudos to VW Skoda for bringing this to market...

... but most new car *buyers* are seemingly looking for more size - even a Fiesta looks bloated by comparison. I have a petrol version and it's like a modern Austin 7 (small yet big enough, handles well, etc). Kudos to VW Skoda for bringing this to market...

Yes these are great little cars, we have a petrol mii, and it does work well as a family car though less so if the kids were in child seats and a pram was required, but once past that stage it is more than adequate and it's a fun drive as well as cheap to run.
These ev siblings should do well.

I'd still buy a nearly new petrol Citigo for less than half the money. With normal usage, it'd be cheaper for the first 8-10 years, have an easy 300 plus mile range with refilling possible in less than five minutes and it has a heater that I wouldn't be afraid to use in the winter. tempted as I am by the notion of virtually free fuel and zero mainenance with the EV, the petrol model simply makes more sense.

27 February 2020
You're comparing a new car to a secondhand one! May as well compare it to 2 and half year old VW UP. A range of 120 miles is perfect for a smalll city car for MOST people.

You can get the much better new Hyundai i10  which has far bigger range, costs £4k less and seems to have a bigger boot.  If you had that for 3 years you could then see where battery tech is for small cars, presumably a lot better.

If battery tech moves on these first gen small EV cars will be worth very little.

27 February 2020
The non-wind-down rear window is one cost cutting decision too many.

The non-wind-down rear window is one cost cutting decision too many.

Is it cost cutting? The window doesn't fit into the door cavity due to overall length of the car. The have pop out windows.

A fixed quarter light would

28 February 2020
A fixed quarter light would have solved the problem. Or better still, consider the design from the beginning such that there is space for the window to wind down.

The current crop of electric city cars make no financial sense. They are all at least £6000 more than equivalent petrol models, have pathetic ranges and require off-street parking for daily recharging.

With normal commuting, how many years would it take to recover that purchase price difference?